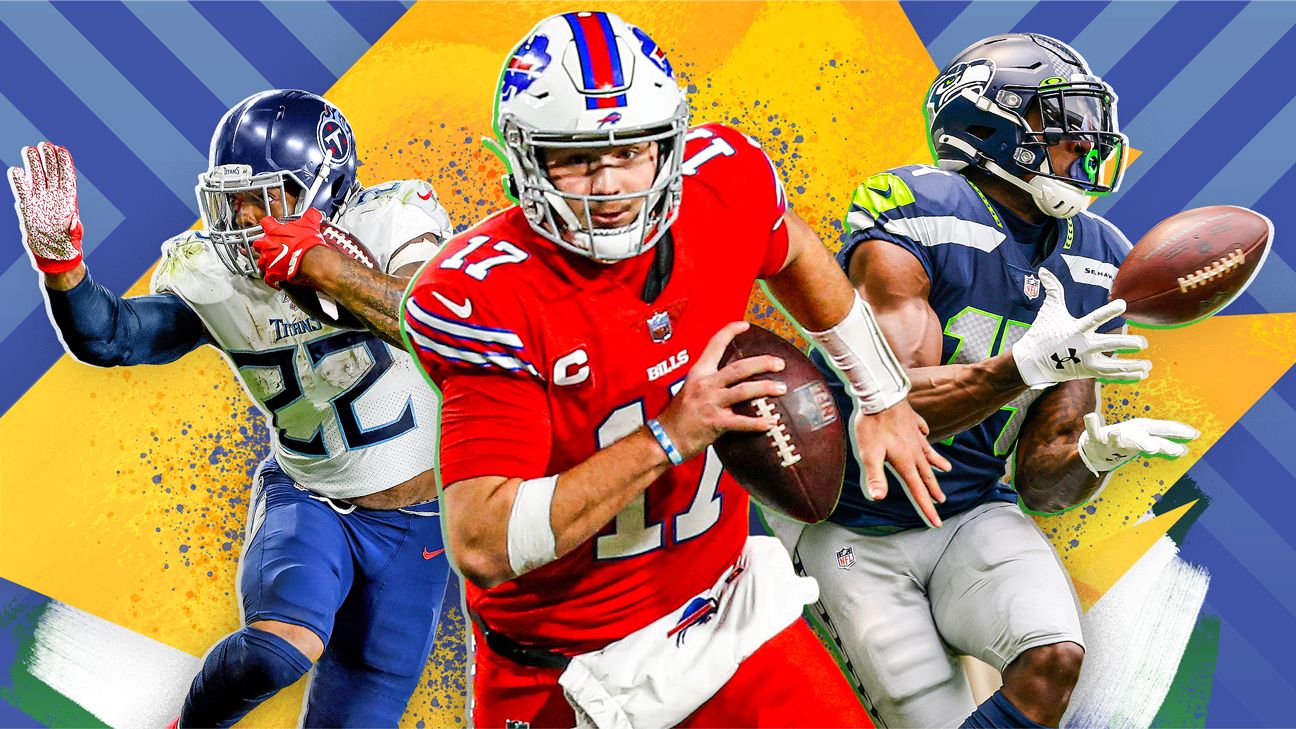 Whether you play in a casual re-draft league or a more serious deep dynasty format, a traditional or a modified scoring format, with your friends and family or with your co-workers, we know that no two leagues are alike.

With that in mind, this will serve as a one-stop shop for all of our best material to ensure you make the best fantasy football picks you can in every draft you’re in: rankings and cheat sheets for PPR and non-PPR, mock drafts for various league types, sleepers and busts for this season, and plenty of helpful information and tips from our expert team of fantasy football analysts.

More people play on ESPN than anywhere else. Join or create a league in the No. 1 Fantasy Football game! Sign up for free >>

Whether you have been doing this for years or are a fantasy first-timer, we have everything you need to help you draft a great team and start the season with a shot at a championship.

Below you’ll find all of our best content as we lead up to the start of the NFL season!

Cheat Sheet
Get all of our best fantasy intel, compiled on a printable cheat sheet to bring with you to your fantasy football drafts.

Cheat Sheet Central
A collection of downloadable, printable cheat sheets for the 2021 fantasy football season, including PPR, non-PPR, superflex and dynasty/keeper leagues. Perfect for your drafts.

These rankings represent the consensus among our fantasy football analysts for the 2021 season. Each analyst maintains their personal ranking for the top 25 quarterbacks, 50 running backs, 50 wire receivers, 25 tight ends, 25 kickers and 25 defense/special teams units. The players are then ranked by the average of those rankings. Each position can also be sorted by any individual analyst’s rankings.

Mike Clay: The 192 players who should be drafted

IDP breakouts and sleepers for 2021
Defensive players ready to take a big step and those who could provide surprising value.

Best picks from each draft slot
Tristan H. Cockcroft helps you get ready for your draft — regardless of when you pick — by planning ahead for Rounds 1 and 2.

Mike Clay’s Ultimate Draft Board
Things never go as planned in drafts, but Mike lists his ideal picks in each round this year and his overall draft strategy.

Mike Clay’s Fantasy Football Playbook: How to draft and play like an expert
Whether you’re new to fantasy or a seasoned vet who plays in a dynasty league, there’s something here for you.

In which leagues is a zero-RB strategy most viable?
You hear talk of taking this approach, but how successful are those who employ it?

Why D/ST has become the mandatory final pick in fantasy football drafts
For years, most fantasy veterans have strongly recommended spending your final pick on a kicker. What has changed to suggest a different approach?

Matthew Berry’s 100 facts
Matthew drops knowledge you should be aware of in advance of the 2021 season.

Matt Bowen’s 10 favorite draft-day targets
Matt breaks down the players he’s highest on at different stages of the draft.

Eric Karabell’s ‘Do Draft’ list
Eric lists players who are being undervalued in drafts and, thus, keep winding up on his rosters.

Eric Karabell’s ‘Do Not Draft’ list
This is all about value. Eric highlights players being drafted way too soon.

Love/Hate for 2021
It’s Matthew Berry’s must-read column of the preseason, highlighting his most undervalued and overvalued players in drafts.

Field’s Fantasy Favorites for 2021
They aren’t necessarily highly ranked nor are they sleepers. Just players Field Yates wants on as many of his fantasy teams as possible.

NFL Nation training camp mailbag
No one is more locked in on all 32 teams than our NFL Nation reporters. Get the latest news and camp insight.

Sleepers, busts, breakouts for 2021
Our analysts’ picks to overachieve, underachieve and emerge.

Preseason weekend wrap: Rookie QB ranks, Lindsay, Gaskin, and more
Eric Karabell provides his initial read on the rookies, as well as early usage trends in backfields around the league.

2021 versions of last year’s breakouts
Mike Clay compares this year’s top candidates to break out to those who did it in 2020.

Breaking down the most contentious backfield battles
Matt Bowen breaks down the backfields with the most competition for touches.

Backup RB rankings
Mike Clay ranks the top backups who could flourish if opportunity presents itself.

Ranking the best 3-WR groups for fantasy football in 2021
Mike Clay breaks down which fantasy wideouts to upgrade or downgrade, based on frequency of teams’ 3-wide sets.

Roundtable: Varying levels of confidence in Saquon Barkley
A combination of NFL reporters and fantasy analysts give their expectations on the Giants’ RB in his return to action.

Is Kyle Pitts the exception to the ‘Don’t draft rookie TEs’ rule?
Tristan H. Cockcroft delves into how history has treated rookie TEs and how to value the Falcons rookie.

Is Jalen Hurts the next to use his legs to finish as a top-10 QB?
Hurts showed flashes as a rookie. Eric Karabell takes a closer look at Philadelphia’s versatile quarterback.

Will Ezekiel Elliott bounce back from his disappointing 2020?
Matt Bowen explains whether there is reason for optimism for the Cowboys’ star.

Is Logan Thomas a one-hit wonder or a legit TE1?
Mike Clay explains whether Thomas can match his impressive production from last season.

How Julio Jones trade affects Titans and Falcons
Mike Clay pores over the ramifications of Jones moving to the Titans.

Should we be concerned about regression for Josh Allen in 2021?
Tristan H. Cockcroft details what to expect from the Bills’ quarterback after a breakout 2020.

The new reality for Odell Beckham Jr.’s fantasy value
What can fantasy managers expect from OBJ in 2021? Matt Bowen digs in.

Create, manage or join a league

Mock draft lobby
Practice makes perfect! Hop into a mock draft and prepare for the real thing against other ESPN Fantasy players.

Sign up for ESPN Fantasy Football
It’s free to play! Create or join a league with friends, customize your settings and battle all season for the top spot.