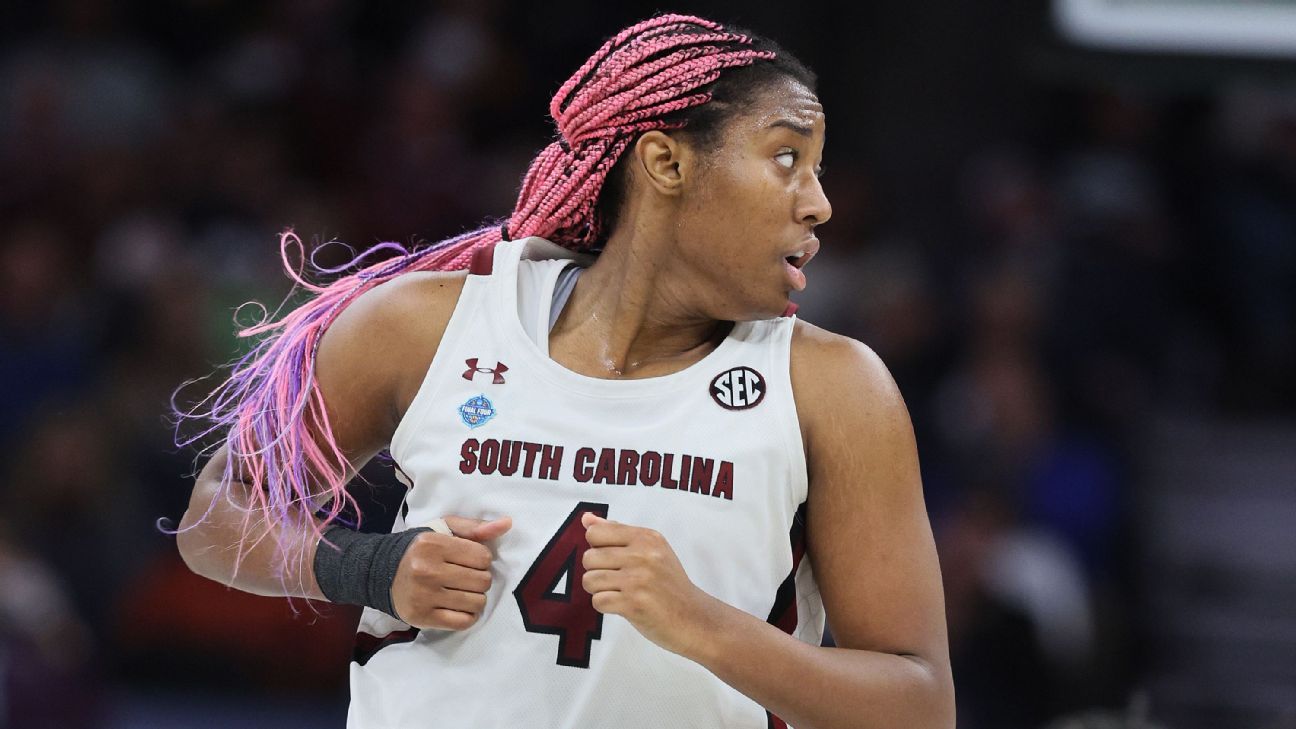 MINNEAPOLIS — Do-overs don’t always happen in sports. The shot that bounces off the rim is the stuff of melancholy memories and difficult dreams. For athletes so used to success, the split second that can separate them is anguishing.

For South Carolina post player Aliyah Boston, it served as both motivation and aggravation. In last season’s national semifinals, her putback attempt bounced out as the buzzer sounded, eliminating the Gamecocks with a one-point loss to Stanford. Her painful reaction, doubling over with emotion, has been replayed over and over. Not that Boston wanted or needed to see it ever again.

Now, though, Boston’s national championship with the Gamecocks supersedes any previous disappointment.

With a 64-49 victory on Sunday over UConn in which Boston had 11 points and 16 rebounds for her 29th double-double of the season, South Carolina completed a wire-to-wire race this season as the No. 1 team in women’s college basketball, giving coach Dawn Staley her second NCAA title.

It is the culmination of a year of maturation in which Boston has become the best player in the women’s college game, has improved on all her skills and has realized that her voice as a Black woman and a prominent athlete is a gift she wants to use. From the low of that missed shot in San Antonio, Boston was determined she wouldn’t miss her next opportunity at a national championship.

South Carolina’s first title, in 2017, was both a program breakthrough and a do-over of sorts for Staley, who as a player at Virginia went to the women’s Final Four three consecutive years yet didn’t win a championship. The gold medals she earned as a point guard for USA Basketball became a salve. But Staley’s unabashed glee over the Gamecocks’ first national championship — coming 25 years after her college career ended — showed she had never quite exorcised that ghost until the NCAA trophy was in her hands.

For Boston, it was less a haunting than a lingering needle. Even though the native of the Virgin Islands has never needed to be pushed toward success. That drive came naturally.

“She was always ready to get up and go,” her father, Al Boston, said. “It didn’t matter where we practiced; she was ready and willing.”

Her mother, Cleone Boston, added, “She’s always been very determined. She’s always had that. Whatever it took, she was willing to do.”

Knowing how close she was to playing for the 2021 NCAA title — after being denied a chance like everyone else when the 2020 tournament was canceled by the COVID-19 pandemic — stayed in the back of Boston’s mind.

South Carolina’s Aliyah Boston jumps high for a block that leads to Destanni Henderson sinking a layup in transition.

Boston has won every national player of the year award so far this season based on the consistency of her performance as the Gamecocks’ anchor inside on offense and defense. She could step into the WNBA right now and be a force, but she isn’t old enough to be draft-eligible as a junior.

Reaching this level in her third college season was boosted by better diet and fitness routines, more strength training, workouts with NBA legend Tim Duncan — and last year’s memory. Even though the putback she missed required some luck as much as skill.

And it also lingered with her parents, who spoke to media at Target Center on Thursday after Boston picked up her latest player of the year hardware. Because of ongoing COVID-19 regulations during the tournament in San Antonio last year, they weren’t on hand to embrace her right after South Carolina’s loss.

Cleone said, “It broke my heart. But there was nothing else we could do except pray and go through it with her and know it will work out in the end, but that doesn’t ease the pain now.”

Cleone also did what she has always done: send her daughter scripture, reminding her of the greater purpose, of feeling despair over something not working out as you hoped it would.

“When she missed that shot and her team lost, honestly I think it has worked out for her,” Cleone said. “She would have wanted to win anyway, but it made her just continue to push, to set new goals for herself and her team, and to work as hard as she has toward accomplishing that goal. And this year speaks for itself.”

South Carolina’s Aliyah Boston is in the right spot after a missed shot and is able to drop in the layup.

Boston set an SEC record with 27 consecutive double-doubles, and along with her player of the year honors, she also was named the Naismith defensive player of the year. Staley campaigned vigorously for Boston to earn the individual honors she has, while also acknowledging she knew those weren’t all that important to Boston.

Boston’s mind was so set on the championship, other things didn’t become distractions. That doesn’t mean she only thought about basketball. Like her superstar predecessor at South Carolina, 2020 WNBA MVP A’ja Wilson, Boston also is committed to social justice and equality, and to exploring her place in the world beyond sports.

“I’ve told her to just continue to be herself,” Wilson said when asked if she offered Boston any advice. “Sometimes in the media, they try to turn you against other players or they think you’re like this or that or something else. Don’t mind that. You really can’t control that. Control what you can and be you.”

Boston has a growing awareness of her importance in the sport, along with what she means in particular to children who watch her in Columbia, South Carolina, and back home in the Virgin Islands.

Her parents smiled as they told of hearing of a fourth-grader who did a presentation on someone from the Virgin Islands who inspires them. The little girl picked Boston, and she even colored the ends of her hair blue in tribute to Boston, who is known for her colorful braids.

The national championship doesn’t erase 2021, but to Boston, it shows the purpose of that hill she still had to climb after the loss. And there is more to Boston than the ring she will get and the honors she has earned — and can add to next season.

“I know that I have a platform, and if I think something is wrong or something is not happening, than I should be able to speak up on it,” Boston said. “It’s crazy, because coming into college, I always thought that if you have a big platform, you probably should not be the one speaking. Because people are going to have their opinions.

“But not everything’s going to go your way always. Not even sports-related, just everything in life. Being able to speak up and use your voice, especially being a person of color … it’s like you need to have your ground.”

And now with a championship trophy in her grasp, Boston is standing more solidly than ever.