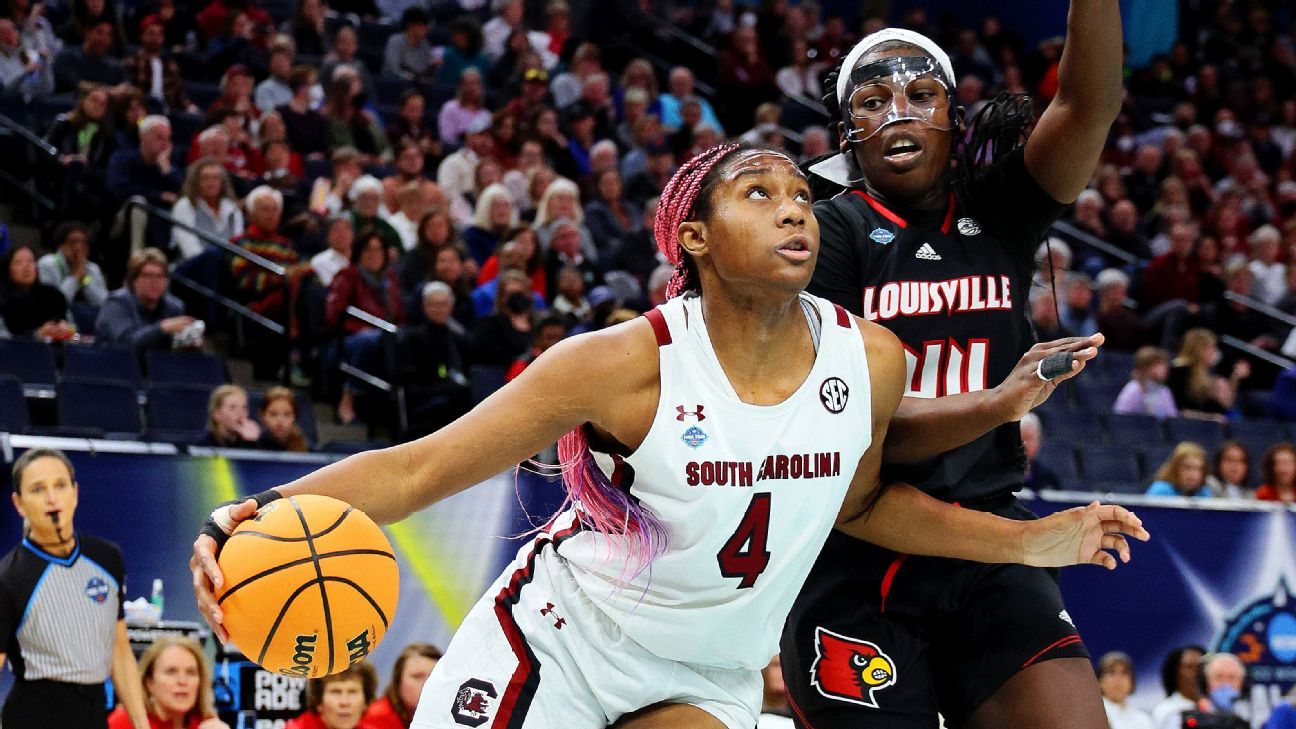 MINNEAPOLIS — The team that has been No. 1 in women’s basketball since this season began, South Carolina, will play for the NCAA championship Sunday.

The Gamecocks, the No. 1 overall seed, beat another No. 1, Louisville, 72-59 at Target Center in the women’s Final Four semifinal Friday.

South Carolina, 34-2, will be in the NCAA final for the second time in program history. The Gamecocks won the 2017 national championship game. South Carolina lost in the SEC final last month on a late 3-pointer by Kentucky, but now will compete for the title that means the most.

South Carolina junior post player Aliyah Boston saw her double-double streak end at 27 in the Gamecocks’ Elite Eight win over Creighton. But she got right back into the double-double business Friday, finishing with 23 points and 18 rebounds. She also had four assists and looked every bit like someone who has won every national player of the year award thus far.

Boston, who also won the Naismith defensive player of the year honor, anchored a Gamecocks’ defense that made everything hard for Louisville, which finished its season 29-5.

After last year’s 66-65 national semifinal loss to Stanford in which she missed what would have been a game-winning putback just before the buzzer, Boston was left in tears. She has seen the video of her anguished reaction far too many times since, and has talked about being determined to not experience anything like that again in the Final Four.

Friday’s game didn’t have that kind of drama, though. South Carolina got off to a 11-2 lead as the Gamecocks made five of their first 10 shots and the Cardinals just 1 of 6. And for the most part, that set the tone for the rest of the game. Louisville made its runs, but South Carolina controlled things.

South Carolina led 17-10 after the first quarter, during which the Cardinals were largely limited to jump shots. It was the first time since Jan. 23 vs. Wake Forest that the Cardinals had trailed after the opening quarter.

The Cardinals did fight back, though. At the 6:48 mark of the second quarter, forward Emily Engstler stole a pass and went in for the layup, giving Louisville its first lead at 20-19.

By halftime, the Gamecocks were up again, 34-28, led by eight points and eight rebounds from Boston. The good news for the Cardinals is that they were within six despite guard Hailey Van Lith being limited to two points. The bad news is that Van Lith’s night didn’t get much better in the second half. After scoring at least 20 points in Louisville’s first four games of the NCAA tournament, she was limited to nine Friday.

Engstler picked up her fourth foul with 4.2 seconds left in the third quarter, after which the Gamecocks led 57-48. Then the transfer from Syracuse, who brought so much energy to the Cardinals this season, fouled out with 4:56 left in the game and buried her head in her hands on the Louisville bench. In her final college game — she has declared for the upcoming WNBA draft — she had 18 points and nine rebounds.

South Carolina had four other players besides Boston finish in double figures scoring: Brea Beal had 12 points, Destanni Henderson 11 and Victaria Saxton and Zia Cooke 10 each.

South Carolina will face either Stanford or UConn in the national championship game; the Gamecocks beat both teams in the regular season.