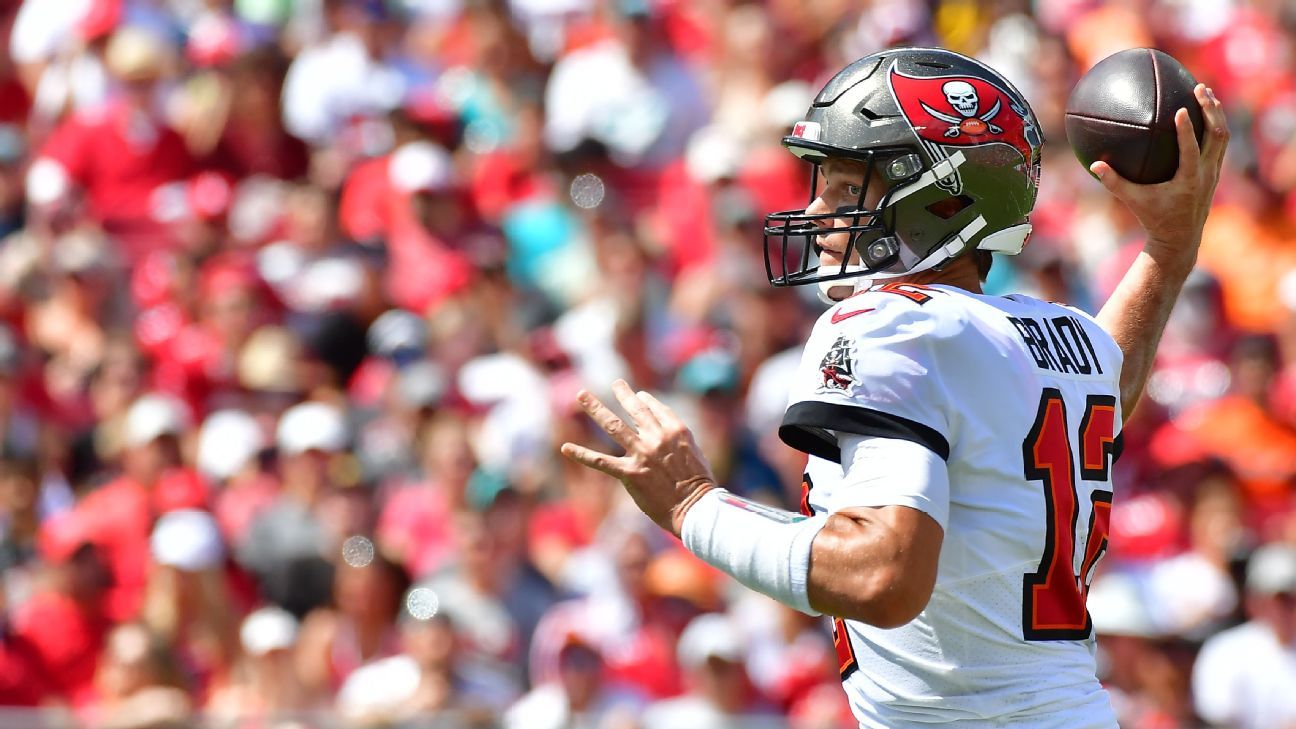 TAMPA, Fla. — Buccaneers quarterback Tom Brady suffered an injury to the thumb of his right throwing hand in Tampa Bay’s 45-17 victory over the Miami Dolphins on Sunday — a game in which he threw for 400-plus yards and 5 touchdowns for the first time in his career.

What made the feat even more remarkable for the 44-year-old signal caller and seven-time Super Bowl champion was that he played with the injury the majority of the game.

“Whenever it happened, it happened early, so it didn’t affect him too much,” coach Bruce Arians said with a chuckle, as his team improved to 4-1 for sole possession of first place in the NFC South.

Brady, who totaled 411 passing yards, was seen after the game with tape on his thumb and wrist. He has always professed to be “old school” when it comes to injuries, preferring not to disclose much about them, or even to reveal them at all.

“In my younger days, I probably would have never showed you guys,” Brady said. “I’d probably try to keep it a secret. But, I think, at my old age, I don’t care so much. It’s just kind of a football injury, so I’ll do my best to get ready for this game — we’ll see what happens.”

Brady will have little time to rest the injury. Instead of having Monday to go over film and Tuesday off, the Bucs will be back practicing Monday morning before flying to Philadelphia on Wednesday to face the 2-3 Eagles on Thursday night.

“We have a short week — a quick turnaround. Last year, we didn’t do very well on a short week,” Brady said. “We’ve gotta put a lot into this coming game. [We’re] playing against a good football team in Philly that’s done some good things.

“It’s a challenge. But they have the same challenge, too,” Brady said. “Get a lot of hydration, get a lot of treatment, get a good night sleep and then be ready for the week.”

The injury did not dampen Brady’s spirits. He got to enjoy the win with his 13-year-old son, Jack, who’s visiting. He also joked about scrambling for 13 yards in the second quarter, reaching a maximum speed of 16.36 mph, according to NFL Next Gen Stats.

“I feel fast. I’ll have some QB outside pitches,” Brady said, laughing. “I’ll leave those to the guys who are much more talented than me. Most of the guys in the NFL are probably making like 30 yards on a run like that. I can turn a 30-yarder into a 10-yarder better than anybody.”

“Every day he comes to practice, he’s 12,” Arians said of Brady. “I think it’s Jack out there instead of him. He’s like a little kid out there.”

Brady’s game on Sunday marked the 14th instance in NFL history where a quarterback threw for 400 yards with five passing touchdowns and zero interceptions, according to ESPN Statistics & Information research. The oldest player to do so prior to Sunday? Peyton Manning, who was 37 years, 165 days old in Week 1 vs. the Baltimore Ravens in 2013, when he threw for 462 yards with seven touchdowns and zero interceptions.

According to Elias, Brady’s 15 touchdown passes are also the most over the first five games of a season by a quarterback who started for the Super Bowl-winning team the previous season.

Brady was one of four previous QBs who had shared the high of 14 when he had that through five games in 2015.