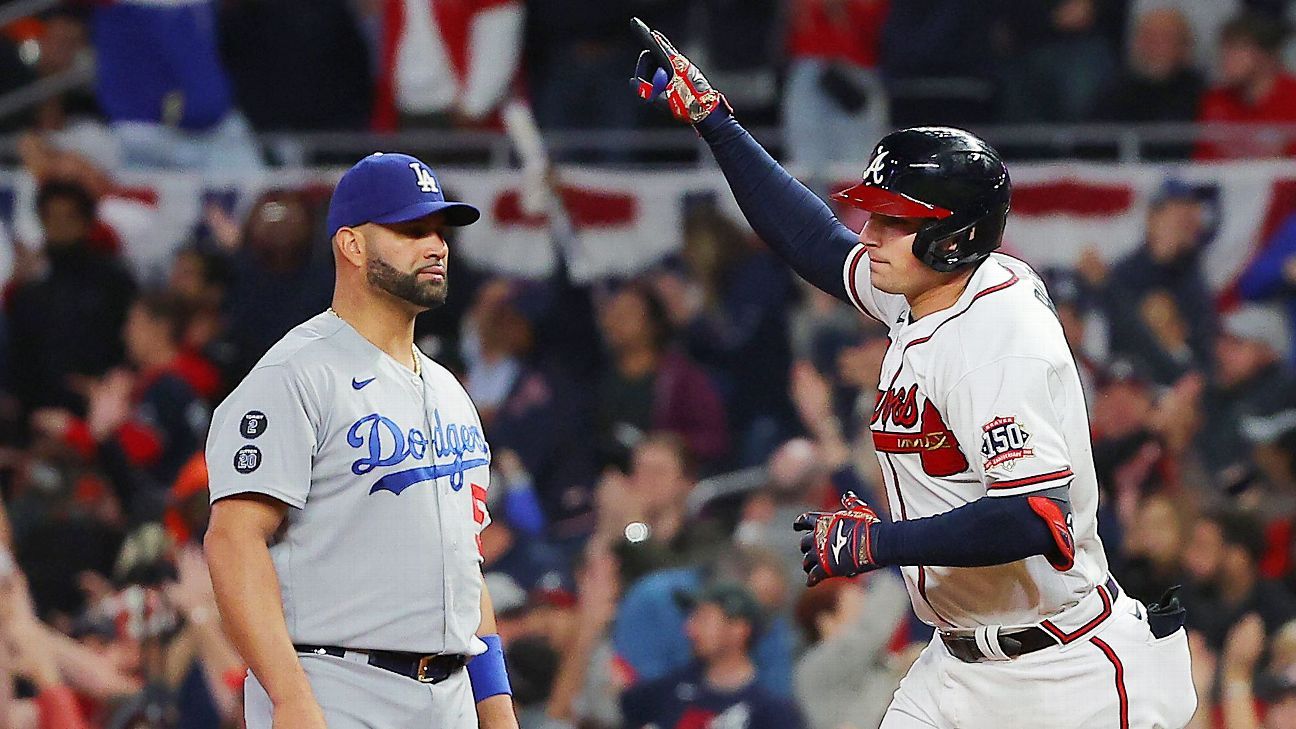 ATLANTA — The Atlanta Braves won Game 1 of the NLCS on a bottom-of-the-ninth game-winning clutch hit on Saturday. And as the club danced around the field in celebration, the frenzied crowd at Truist Park chanted “MVP! MVP!” at the game’s hero.

If all you knew about Game 1 were those two facts, who would you guess had stroked the winning hit? Freddie Freeman, right? You know, the National League’s MVP in 2020 and face of the Atlanta franchise.

But the correct answer is Austin Riley, whose emergence this season may just mean that Atlanta has a new MVP in town.

Riley’s RBI single up the left-field line off Dodgers relief ace Blake Treinen in the bottom of the ninth lifted the Braves to 3-2 win the NLCS opener. Earlier, Riley tied the game at 2-apiece by blasting a home run over the left-field bullpen in the fourth inning off Tony Gonsolin, making his hero turn a night-long journey.

“You dream of that as a little kid,” Riley said.

With the twin heroics, Riley continued a breakout season and joined an exclusive list of players in Braves history to have a game-tying hit and a game-winning hit in the same contest: Tony Gonzalez (1969), Hank Aaron (1969), Michael Tucker (1998) and Brian Jordan (1999).

As for Freeman, who put the Braves into the NLCS with a go-ahead, eighth-inning homer against Milwaukee on Tuesday in the NLDS clincher, it was arguably the worst game of his postseason career. For the first time ever, he struck out four times in a playoff game, his fourth whiff coming just minutes before Riley’s heroics.

But Riley’s emergence this season, which has continued during the playoffs, has signified something crucial for a club trying to finally get past the National League’s behemoth in the Dodgers: This still-maturing club is a lot more than Freddie Freeman these days.

“I don’t know that we won many games that Freddie’s [struggled],” Braves manager Brian Snitker said. “And it’s a good thing. I mean, that just shows you how these guys are growing and they’re maturing and the moment isn’t too big for them.”

Riley, 24, entered this season with a .232 career batting average with 26 homers in 131 games over two big league seasons. This season, those numbers exploded, as he hit .303 with 33 homers, 107 RBIs and 6.1 WAR, per baseball-reference.com. Those numbers are why the fans might not have been deluded in the MVP chants they directed Riley’s way.

After Riley’s winning hit, even as teammate Ozzie Albies raced home with the tie-breaking run, the Braves had poured out of the dugout in pursuit of Riley to celebrate. Red fireworks began shooting out of the stadium’s upper reaches, part of the celebratory light show. The mascot ran around the field with a gigantic Braves flag. It’s the kind of jubilation you expect from a game-winning hit by the home team in a playoff game.

However, if not for Riley, the mood in Cobb County could have been very different, because it was a game the Braves very much needed to win.

Atlanta started their young ace, Max Fried, who entered the game as baseball’s hottest pitcher. They had home-field advantage over the 106-win Dodgers thanks to the latter’s status as a wild-card team. And the Dodgers, who needed five grueling games to knock off the 107-win Giants in the NLDS, went with a bullpen game in reaction to a heavily worked pitching staff.

For most of the game, the gambit worked. Fried wasn’t as sharp as he has been in recent weeks, but held the Dodgers to a pair of runs over six innings. But the Braves managed just a pair of runs over the parade of Dodgers relievers — eight of them by the end of the night — who came into the game.

If Atlanta had not pulled out Saturday’s game, and entered Game 2 down in the series, with the home-field advantage flipped to Los Angeles, and the Dodgers sending future Hall of Famer Max Scherzer to the mound on Sunday, some mild panic might have set in at Truist Park.

“It doesn’t get easier, that’s for darn sure,” Snitker said. “I think any, all these wins here in this thing are going to be big. They’re all going to be hard to come by.”

Instead of panic, there was bedlam and for that, you have Riley, the Braves’ newest MVP candidate, to thank.

“You see what he’s doing, the at-bats in the [division series], here,” Snitker said. “I think that kid’s definitely taken the next step forward.”