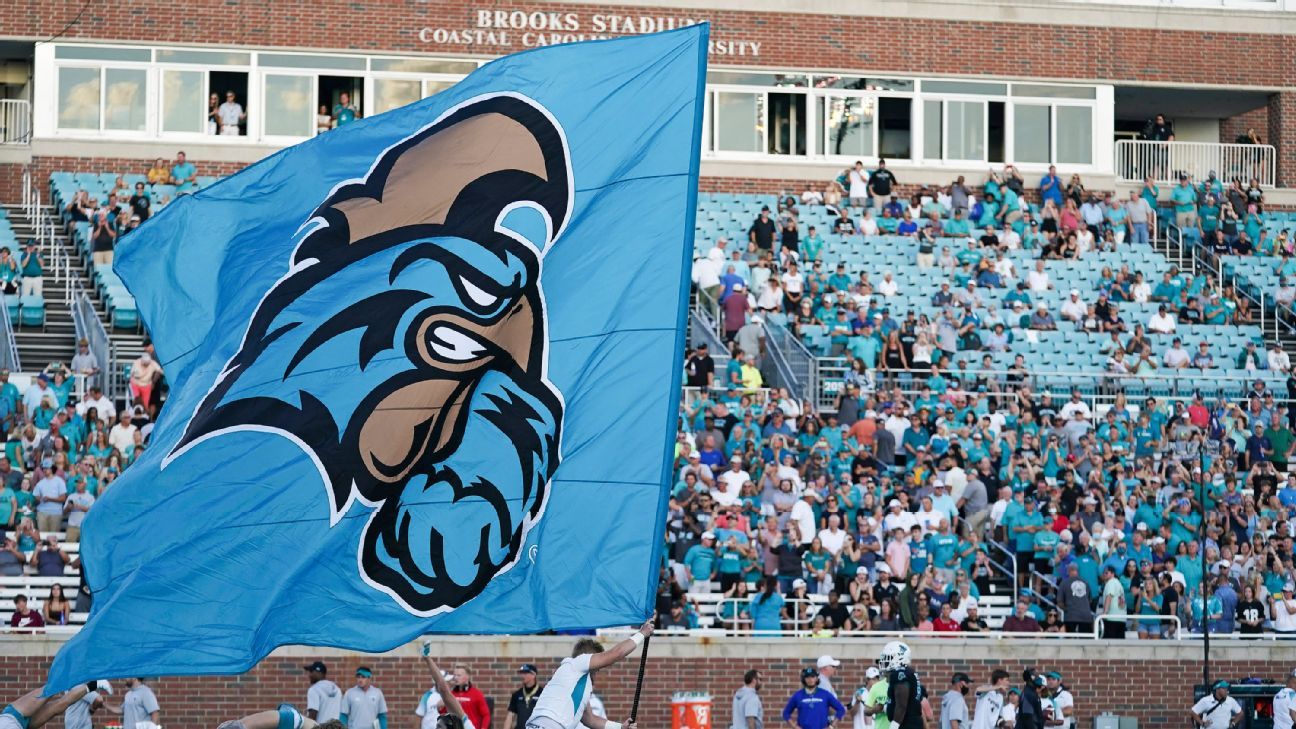 CONWAY, South Carolina — Last October, after Coastal Carolina stunned Louisiana 30-27 on the road, a few players asked coach Jamey Chadwell if he would grow a mullet if they won the Sun Belt Conference championship.

Since the Chanticleers had been picked by the media to finish last in the Sun Belt East in the preseason, Chadwell figured he had nothing to lose by saying yes.

In only their fourth year in the FBS, the mullet-loving Chanticleers went 11-0 in the regular season, won the Sun Belt title and became the league’s first top-10 ranked team. Their lone defeat was a 37-34 overtime loss against Liberty in the FBC Mortgage Cure Bowl. So in February, Chadwell, 44, stopped cutting the hair on the back of his head. By late August, the Tennessee native had a Camaro crash helmet that would have made Billy Ray Cyrus envious. He finally had it trimmed a few days before last week’s opener, a 52-14 victory versus The Citadel.

“It was killing me,” Chadwell said. “You don’t think of it sometimes, but when your hair gets wet and it gets longer, you start feeling it.”

What would you rate it? pic.twitter.com/QzuW8CMZVY

In a college football season like no other in 2020, the upstart Chanticleers became America’s favorite underdog with their unusual mascot, teal-colored “Surf Turf” playing field, flowing manes and scrappy play. They routed Kansas on the road, stunned No. 13 BYU with only three days to prepare after Liberty canceled because of COVID-19 issues, and hosted College GameDay on campus for the first time.

What will the Chanticleers do for an encore? We’ll start to find out when they host Kansas on Friday night (7:30 p.m. ET, ESPN2 and the ESPN App), the first time they’ve hosted a Power 5 opponent at Brooks Stadium.

“This year is a little different story because of the success we had, people have a target on us and you might call that pressure,” linebacker Silas Kelly said at the Sun Belt media day. “But in our minds we’re still picked to finish last and we have to carry that with us and take that into this year and have the same approach, same mentality, same mindset as we did last year.”

Actually, this season Coastal Carolina and Appalachian State were voted co-favorites to win the Sun Belt East. The Chanticleers bring back all but three starters, including 11 super seniors who opted to return when the NCAA offered an extra year of eligibility because of the coronavirus pandemic. Chadwell said his team currently has 96 scholarship players. Quarterback Grayson McCall, who ranked 10th in total QBR (82.2) among FBS players as a redshirt freshman in 2020, is back, along with the entire offensive line. The biggest departures were running back CJ Marable (887 rushing yards) and defensive end Tarron Jackson (8½ sacks).

“In my time coaching, they’re the best group of leaders that I’ve been around,” Chadwell said of his returning seniors. “They’re the whole reason we had the success we had. During the pandemic, they kept our guys focused. They told them, ‘We can’t control what’s going on, but we’re going to be ready just in case.’ They kept them doing the things we needed to do in the offseason.”

When the Chanticleers started winning, Chadwell said he and his coaches didn’t have to keep them grounded because the upperclassmen did. In 2019, Coastal Carolina finished 5-7, losing five times by a total of 24 points (it lost to Appalachian State and Louisiana by a combined 60 points). The team wore “24” bracelets in 2020 as a reminder.

“When we started having success, it became very easy to start patting yourselves on the back because we became America’s team, right?” Chadwell said. “I met with our captains and leadership group, and they said, ‘Coach, don’t worry about it. We’re going to handle it as a team. We’ll make sure we’re focused on what we need to do as a team.'”

Despite their success last season, the Chanticleers never forgot where they started, which was literally from scratch in the FBS. When Chadwell replaced Joe Moglia as head coach in January 2019 (he served as interim coach in 2017 while Moglia took a medical leave of absence), the program’s facilities still resembled those of an FCS program. The team didn’t have meeting rooms for different positions. On most days, three position groups would meet in a large room, defensive backs would meet in a room reserved for Olympic sports and other positions would get together anywhere they could find space.

Now, Coastal Carolina’s operations building includes offices for each position coach with a meeting area for his players. There’s a much larger room for the entire team to meet. A two-phase, $31.8 million expansion of Brooks Stadium over the past three years increased its capacity from 10,000 to 15,000 and then close to 21,000.

The university announced earlier this week that Moglia, a former chairman and CEO of TD Ameritrade who still serves as the school’s chair of athletics and executive director of football, made a generous gift to start the design of an indoor practice facility, which will include football operations, a weight room, coaches offices, recruiting area, academic enhancement center and a dining hall. The athletic department has to complete fundraising to build the football facility.

“We’re not going to have a barbershop and slide like some of these big-money programs, but we’re going to have what we need,” Chadwell said. “Hopefully, we’ll keep winning and more people will want to invest.”

The university said freshman admissions applications increased by nearly 10% for this fall semester, including a record number of international students. Amanda Craddock, associate provost for enrollment management, told the board of regents in May the football team’s exposure “increased our reach across the country as well as internationally.”

“There were a lot of questions when we went to FBS,” Chadwell said. “A lot of people were wondering why we were getting rid of all of our rivals, but I think last year they saw the vision of what this place could become because of the success that we had. There’s pride in the community, and maybe more so on campus because kids are saying they go to a school with a top-15 football program in the country. It’s really benefited our program because of the value we’ve brought to our community and campus.”

Last week, a crowd of 16,236 fans, the second largest in Brooks Stadium history, watched the Chanticleers win their opener. An even bigger crowd is expected Friday night.

“I shed some tears,” defensive end Jeffrey Gunter said. “It was like a dream come true. I remember when things weren’t so good around here and nobody was in the stands.”

Now, visitors strolling through downtown Conway, which is about 21 miles northwest of Myrtle Beach, are greeted by a “Home of the Chanticleers” sign and Chanticleer heads painted on sidewalks. That doesn’t mean Chadwell is recognized everywhere he goes, even with his growing mullet.

“I can go to a restaurant and the majority of people won’t know who I am,” he said. “My kids’ teachers will wave at me at elementary school and say, ‘Good job, coach.'”

Someone who is not a fan of Chadwell’s new look is his wife, Solmaz. She especially didn’t like it while Chadwell was competing in a moustache competition with his coaches during preseason camp.

“When she looks at me straight ahead, it’s OK because you can’t tell as much, but when you turn to the side …,” Chadwell said. “As long as we keep winning, it’s going to keep growing.”