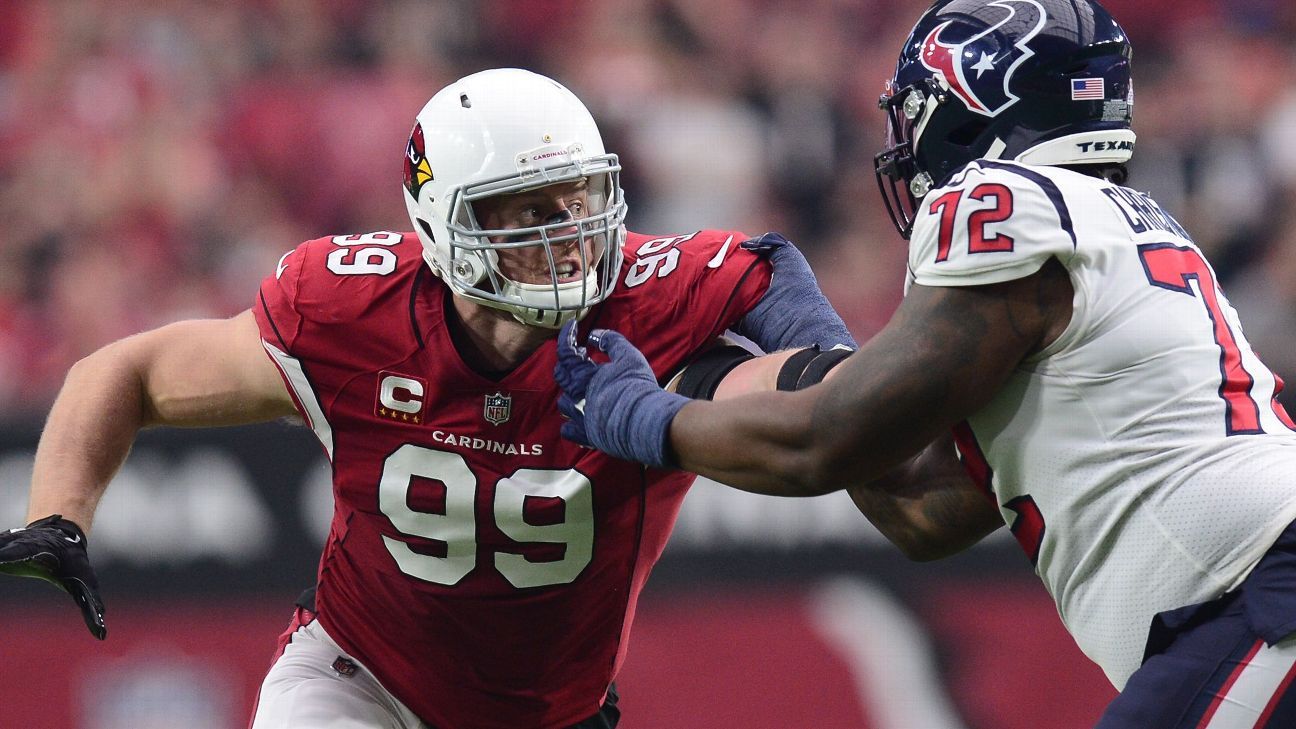 TEMPE, Ariz. — On the eve of their biggest game of the season to date, the Arizona Cardinals lost one of their most important defensive players.

Defensive end J.J. Watt will undergo what is likely to be season-ending shoulder surgery, sources told ESPN’s Adam Schefter on Wednesday night. No date has been set for the procedure.

The Cardinals host the Green Bay Packers on Thursday night in a matchup for early control of the NFC. Arizona is 7-0, and Green Bay is 6-1, producing, perhaps, the best Thursday night game of the Super Bowl era. It’s the highest combined winning percentage (.929) for a Thursday game in October or later during the Super Bowl era and the first time since the 1970 merger that two teams with at least 13 combined wins meet in Week 8 or earlier.

Watt, in his first year with the Cardinals, injured his shoulder in the second quarter Sunday, yet still managed to play the rest of the game with the injury. He finished with a tackle for loss and a quarterback hit.

The undefeated Cardinals, who sit in first place in the NFC, ruled Watt out against the Packers when the injury report was released earlier Wednesday. He didn’t participate in the Cardinals’ only practice of the week on Tuesday. Turns out, his status was much worse.

Watt had recently found his groove in the Cardinals’ defense after needing about four games to both get his football legs under him after missing all of training camp because of a hamstring injury and getting acclimated to a new defense.

Watt had 10 tackles, including five for a loss, and one sack this season. Meshing in with new defensive teammates, he managed to do what has been a staple of his career: getting to the quarterback often. He finished with 10 quarterback hits in the first seven games, including nine in his past four.

But his impact goes deeper on a Cardinals defense that’s the best on third down and is tied for the league-lead in fewest points allowed per game.

He has the third-highest pass rush win rate for defensive tackles, according to NFL Next Gen Stats. Watt beat his blocker within 2.5 seconds on 22.8% of snaps when he lined up at defensive tackle, the third-best rate in the league.

“I think J has played well the last three weeks,” Cardinals defensive coordinator Vance Joseph said before Sunday’s win against the Houston Texans. “He missed camp, so the first couple games during the season, he wasn’t in form. From the Rams game, the San Fran game last week, to [Sunday], he’s played at a high level. He’s so disruptive. He’s making plays. The sack numbers are not there, but as far as the plays he’s made on third downs, knocking balls down, making TFLs on first and second down, he’s been a dominant player the last three weeks.”

And now another injury for the three-time defensive player of the year.

After starting all 80 games in his first five seasons, Watt missed 13 games in 2016 because of two back surgeries, 11 games in 2017 because of a fractured left tibia and eight games in 2019 because of a torn pec. If he misses the rest of this season, he will have missed 42 games in the six seasons since that 80-game run, missing at least half the games in four of those six seasons, according to ESPN Stats & Information research. It also will be the fourth time in the past six seasons he has suffered a season-ending injury.

Though Watt will be out, the Cardinals will get back pass-rusher Chandler Jones, who missed the past two games because of COVID-19. He was activated off the reserve/COVID-19 list on Monday.

A win would make the Cardinals 8-0 for the first time in franchise history.

Even with Watt not at 100%, Arizona’s defense was dominant Sunday in a 31-5 victory over the Texans.

“It was a game we should have won,” Cardinals linebacker Isaiah Simmons said. “And we did.”