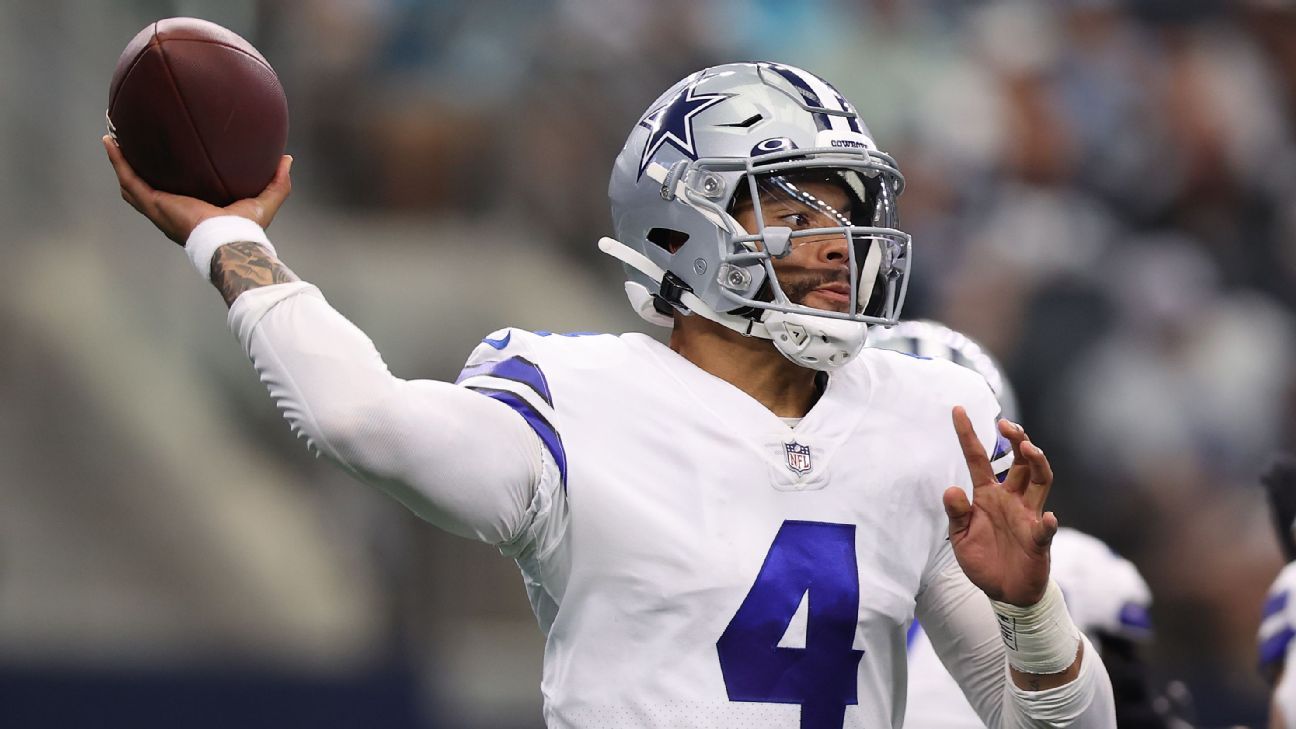 With Prescott out, Cooper Rush will make the first start of his career. Rush has completed 1 of 3 passes for 2 yards and has not thrown a pass since his rookie season in 2017. He won the backup job in the preseason by outperforming Garrett Gilbert by completing 29 of 46 passes for 272 yards and two touchdowns.

While Prescott said earlier in the week he would play if the decision was his alone, the Cowboys have opted to give Prescott more recovery time from a calf strain he suffered on the game-winning touchdown pass in their overtime win against the New England Patriots on Oct. 17.

They host the Denver Broncos at AT&T Stadium on Nov. 7 in their next game.

After Prescott rehabbed during last week’s bye and didn’t take turns in practice this week, the Cowboys’ hope is another week of rehab and rest will serve him better for the remainder of the season, which is something he acknowledged Thursday when he met the media.

“There is a bigger picture. It is more than just this one game,” Prescott said. “The fact is I don’t want this to linger past this week. Same as I told y’all in training camp about my shoulder; something I want to nip in the bud and make sure I’m healthy and ready to go so I don’t think about it playing and we’re not having these conversations past today.”

Prescott took only walkthrough snaps during the week while going through resistance training and rehab. He threw some passes during practice but did not take any snaps in 11-on-11 work. He pushed his rehab work on Thursday and coach Mike McCarthy said the quarterback reported soreness on Friday, which was not unexpected.

On Sunday, Prescott went through his normal pregame warm-up, complete with resistance training under the watchful eye of director of rehabilitation Britt Brown. After nearly 20 minutes of work, Prescott, McCarthy and Brown had a quick discussion. Prescott remained on the field and threw some passes before heading back to the locker room.

Will Grier, who was claimed off waivers from the Carolina Panthers at the final cuts in September, will serve as the backup.

Prescott is off to a fast start this season after missing 11 games last year with a compound fracture and dislocation of his right ankle. He has thrown for 1,813 yards on 158-of-216 passing with 16 touchdown passes and four interceptions. He has thrown at least three touchdown passes in four straight games, a first by a Cowboys quarterback in team history.

The Cowboys went 4-7 in games not started by Prescott last season, with one of the wins coming at the Vikings with Andy Dalton as their starter.

At 5-1, the Cowboys have a big lead in the NFC East and entered Week 8 among the best teams in the conference. A loss to Minnesota could impact their playoff positioning later in the season, but the Cowboys have opted to play it safe with Prescott in the hope he does not reinjure the calf when he returns.