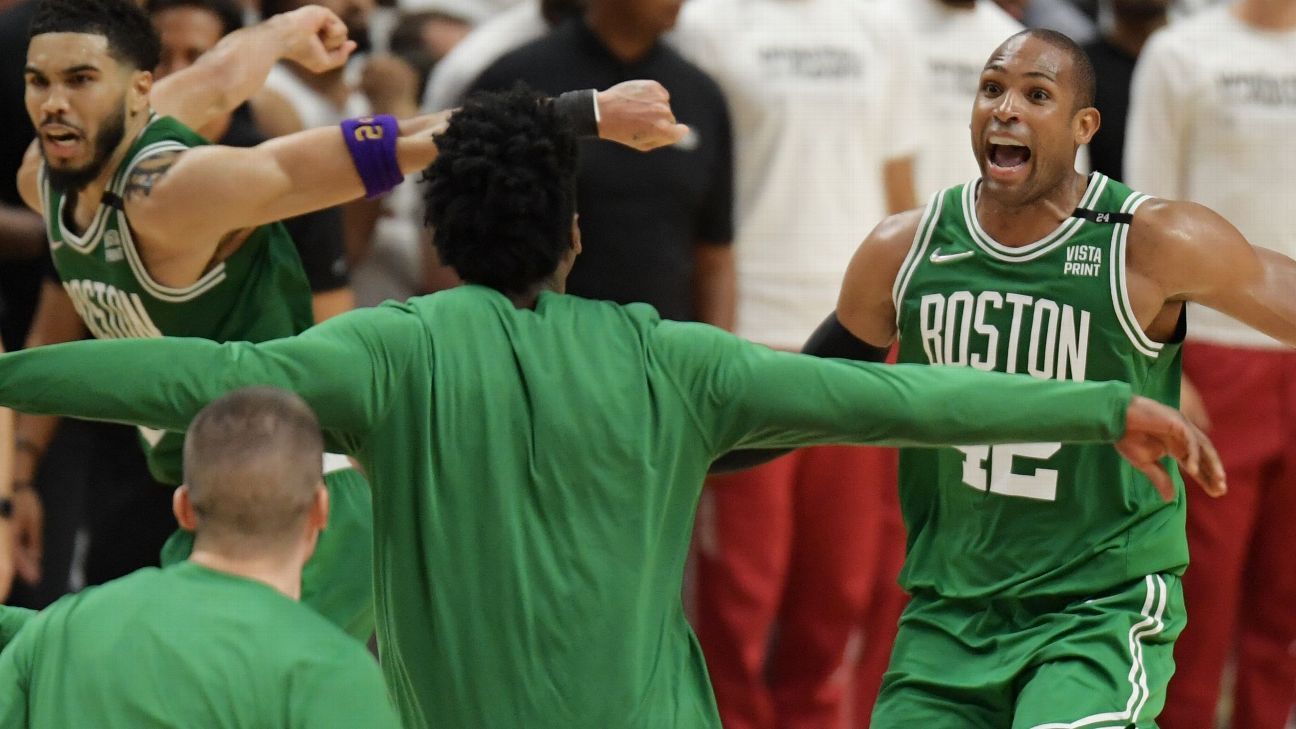 MIAMI — Nothing about this Boston Celtics season has been easy. So, it stands to reason, making it to the NBA Finals wouldn’t be, either.

But, at the end of a grueling seven-game series in the Eastern Conference finals against the Miami Heat, that is exactly where the Celtics have returned once again.

Behind a pair of terrific games from Jayson Tatum and Jaylen Brown, Boston won its third game at FTX Arena in this series, escaping with a 100-96 victory in front of a sellout crowd that was thrilled by the exploits of the home team right to the game’s waning moments.

“Feels like it was always meant to be this way,” Celtics coach Ime Udoka said. “Difficult.”

With the win, the Celtics advanced to the NBA Finals for the first time in 12 years, where they’ll face the Golden State Warriors. The series begins Thursday night (9 p.m. ET on ABC) at San Francisco’s Chase Center — a matchup that features 123 games of NBA Finals experience across Golden State’s roster, compared to exactly zero for Boston’s.

To get there, the Celtics managed to avoid what would have been a truly disastrous collapse, going from having a 13-point lead with 3:35 remaining, to a 7-point advantage with just over a minute to go, to having their season in the hands of Jimmy Butler with 17 seconds to play as the Heat superstar rose up for a transition pull-up 3-pointer that could’ve given Miami the lead.

“Not again,” said Celtics guard Marcus Smart, who had 24 points in 40 minutes himself. “Man, Jimmy has been playing well, so when he pulled up, it was kind of like, ‘Oh, man. Just hope he doesn’t make it.'”

Fate, though, proved to be on Boston’s side. Instead of sending the Heat back into the lead, Butler’s shot instead ricocheted off the front of the rim. And, after Smart hit a pair of free throws, the Celtics could — finally — breathe easily.

“[I] just didn’t know how to act,” said Al Horford, who had been the record-holder for most playoff games in NBA history without reaching the NBA Finals before Boston won this game, and who had 5 points and 14 rebounds in 44 minutes in the win. “Just caught up, excited. A lot of hard work. I’ve been a part of a lot of great teams, a lot of great teammates, and I’m so proud of this group.”

What made Boston’s late-game foibles all the more surprising was just how sure-minded the Celtics were throughout the game. After blowing an opportunity to end this series at home Friday night in Game 6, the Celtics were unanimous in their belief they would come back to Miami and win this game.

And, for the first 46 minutes, they were true to their word. After spending so much of this series committing unforced errors, Boston was locked in from the beginning of this one. The Celtics didn’t let the Heat make a field goal for the opening three minutes, jumping out to an early lead that Boston, which led wire-to-wire, never relinquished.

“That’s us,” Brown said. “We’ve been responding all year, all season to adversity. Today was the biggest test, not just of the year but of our careers, to mentally come into a Game 7 away after losing on our home court, which was tough, and we got it done.”

Every time the Celtics pushed the lead out, the Heat found a way to reel them back in. Much of that was down to Butler’s brilliance, as he had 35 points and played every second of the game.

But the Heat — a gritty, tough team that beat these Celtics two years ago in this same series inside the NBA’s bubble at the Walt Disney World Resort — showed why they were atop the East standings for most of this season, and earned the No. 1 seed in the East playoffs. They fought tooth and nail to stay in the game, getting a big game from Bam Adebayo (25 points, 11 rebounds, four assists) and making life miserable for Boston for every second of the game at the other end.

Ultimately, though, the Celtics won this series the way they have won so many games since turning their season around after a loss to Portland on Jan. 21 dropped them to 23-24: by playing suffocating defense. And, after Miami opened the fourth quarter with two buckets to pull to within 82-79 with 10:58 to go in the game, forcing Udoka to call timeout, Boston held Miami scoreless for more than four minutes.

That allowed the Celtics to create enough of a cushion to, ultimately, hold off that one final Heat charge.

“Defense is our identity,” Udoka said. “It’s been there and held us — got us through the tough times, when the offense wasn’t clicking, games when the offense doesn’t click to the level it should, we can always rely on that, and that was the case tonight.

“Got big leads, dwindled it down and we continued to get stops when we needed to, especially at the end.”

The Celtics also got some big-time shot-making down the stretch from Tatum, who finished with 26 points, 10 rebounds and six assists en route to being name the inaugural winner of the Larry Bird Trophy as Eastern Conference finals MVP.

Two shots in particular midway through the fourth quarter — a 3-pointer on the left wing, and a midrange jumper from the elbow — helped keep the Heat at bay when they made yet another push back into the game.

The Celtics punched their ticket back to the Finals for the first time since losing to the Los Angeles Lakers in seven games in 2010. And, by doing so, the Celtics now have a chance to win Banner 18 — which would push them back out in front of their forever rivals in the race to have the most titles in NBA history.

It’s been a true roller-coaster ride of a season for the Celtics — and, really, the past few seasons. This is the third time in five NBA seasons Tatum has been in the East finals. It’s the fourth time in six for Brown, and fourth in eight for Smart. It’s Horford’s first trip after 16 seasons.

En route to reaching the NBA Finals, the Celtics knocked out the teams that beat them in each of the last three playoffs — the Heat (2020), the Milwaukee Bucks (2019) and Brooklyn Nets (2021). They did so by winning seven games on the road, back-to-back Game 7s and three elimination games.

And, as a result, they are headed to the Bay, and a date with the Warriors.

“I truly do,” Tatum said, when asked if he thought those experiences helped the Celtics break through this time around. “In the moment when you lose those series, obviously it hurts and it’s tough. But you never forget it.

“I think that’s what we all have in common, that we’ve all been through those tough times and we remember how that felt.

“We didn’t want to have that feeling again leaving here tonight. We left it all out on the floor. Obviously we got it done.”