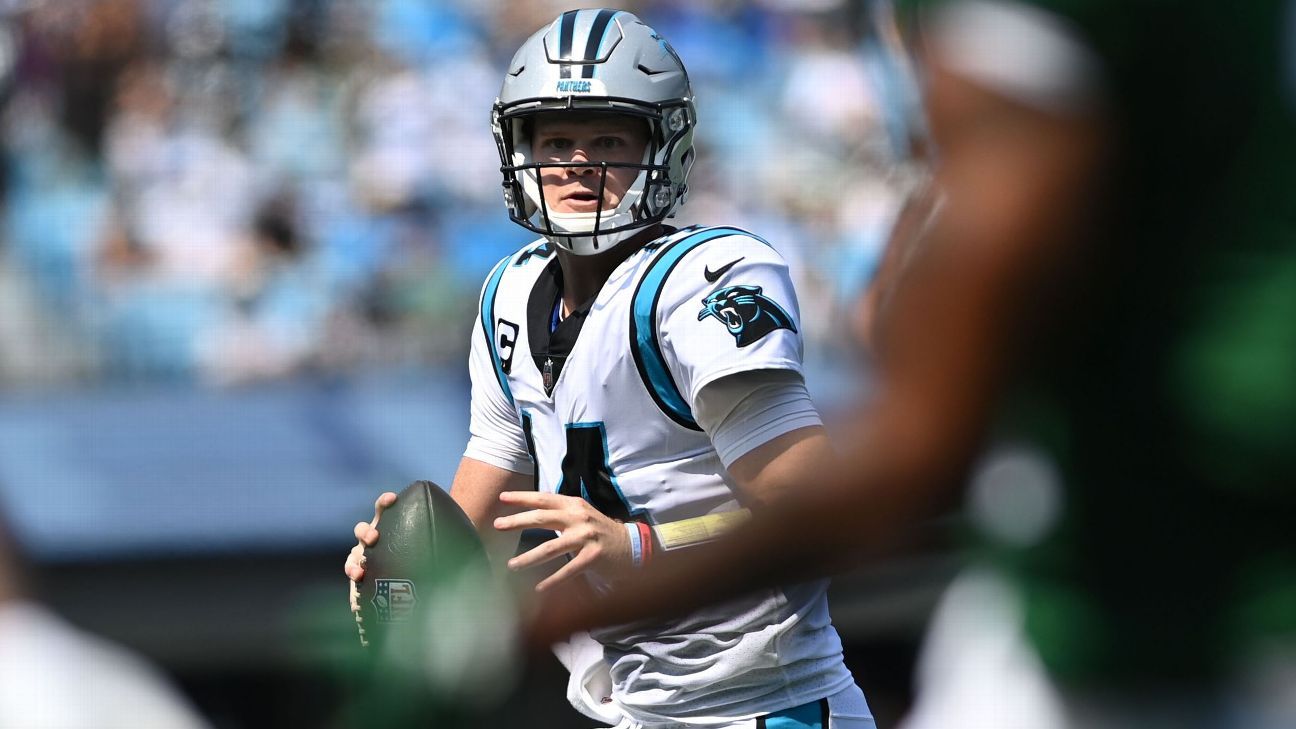 CHARLOTTE, N.C. — Carolina Panthers quarterback Sam Darnold wouldn’t say anything bad about the New York Jets heading into Sunday’s opener at Bank of America Stadium, but he made his former team look bad in the 19-14 victory.

The third pick of the 2018 draft threw for 234 yards in the first half, 16 more than in any first half in his previous three seasons in New York. That included a 57-yard touchdown to former Jets receiver Robby Anderson, his favorite target in 2018-19.

Darnold also ran for a 5-yard touchdown late in the first half to give Carolina a 16-0 lead.

He had no interceptions, another issue for him in New York, where he threw almost as many picks as he did touchdowns.

Darnold was particularly effective against the blitz, especially in the first half. He completed 8 of 9 attempts for 94 yards. Last season, his 55.6% against the blitz ranked 32nd among 35 qualified quarterbacks, according to ESPN Stats & Information.

Darnold’s biggest mistake was a fumble on fourth-and-1 from the New York 4, but that was more on fullback Giovanni Ricci running into the ball before Darnold could get it to Christian McCaffrey.

That Darnold’s biggest play went to Anderson should come as no surprise. Anderson was his favorite target with the Jets in 2018-19. The two teamed for 88 receptions for 11 touchdowns.

That Darnold relied heavily on McCaffrey also shouldn’t have been a surprise. One of the reasons the Panthers felt comfortable trading for the former USC star was the belief he would prosper in his new surroundings because he would be surrounded by more playmakers.

Of Carolina’s 153 yards in the first half, McCaffrey had 83 — 32 rushing and 51 receiving. McCaffrey finished with 187 total yards, 98 rushing on 21 attempts and 89 receiving on nine catches.

The offensive line also protected Darnold well, giving up only one sack. Darnold was sacked 98 times in three seasons with the Jets.

The red zone, however, remains an issue. The Panthers scored only one touchdown in four trips inside the 10-yard line.

The real key for Darnold will be playing well against tougher competition, beginning with next week’s game against the New Orleans Saints.