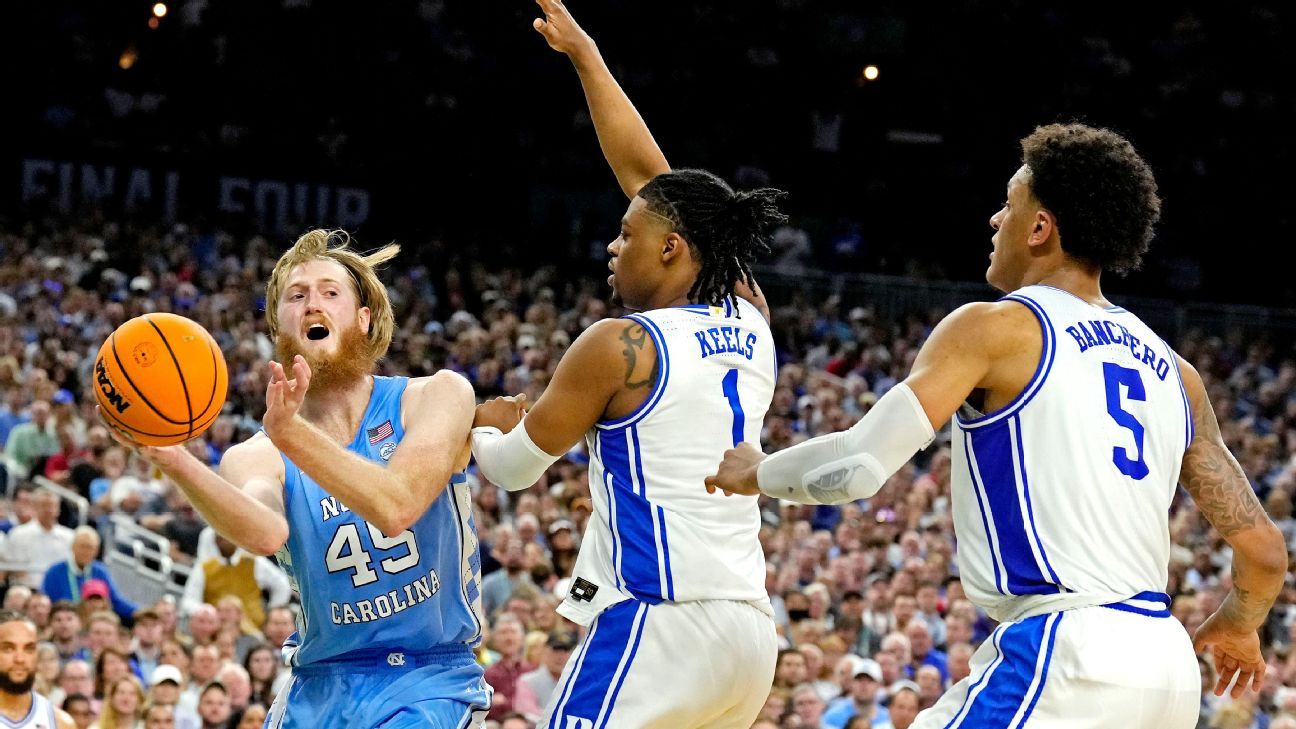 The calendar has turned to April, but we’ve reached the penultimate night of March Madness. Saturday’s 2022 Final Four action in New Orleans features the bluest of blue-blood matchups and ticket prices to match.

The No. 2 seed Wildcats faced the No. 1 seed Jayhawks to start the night. It was the fourth time Kansas coach Bill Self and Villanova’s Jay Wright have faced off with these schools in the Sweet 16 or beyond. Each time, the winner has gone on to win the title — which is a positive precedent for Self’s squad, who came out on top 81-65.

Now, the Tobacco Road rivalry between Duke and UNC takes on new stakes. These schools, separated by about eight miles in North Carolina, meet for the first time in the Final Four. It will be UNC coach Hubert Davis’ first Final Four as a coach and Duke coach Mike Krzyzewski’s last. Coach K has won 101 NCAA tournament games. Two more and he’ll close his legendary career in storybook fashion.

On the court, Duke should have the talent advantage. The Blue Devils have two of the top eight draft prospects in this year’s class. Paolo Banchero is Duke’s leading scorer, averaging 17.1 points.

We have analysis and best moments from each game.

You know how sometimes big-time matchups don’t live up to the hype? This is not one of those times.

Things are neck and neck in UNC-Duke, and Mark Williams is out there cleaning up misses in style.

… but UNC is on fire. Duke scored the first couple of baskets out of the break, but a 13-0 run has the Tar Heels in the lead.

Despite the phrase “foul trouble” being bandied about early and often, North Carolina and Duke played an entertaining half that ended with the Blue Devils up 37-34. Much of the excitement came from Banchero and RJ Davis, who set the pace for their teams with 10 and 14 points, respectively.

There’s also the fact that, oh by the way, this is Duke and North Carolina in a national semifinal at the Superdome. These teams know each other inside and out, and they’re leaving everything on the court.

As for the foul trouble, that came up right away. Krzyzewski sat Mark Williams just five minutes into the contest when the sophomore was hit with his second foul. Theo John replaced Williams, and John proceeded to be whistled for four fouls of his own in 11 minutes.

Duke then finished the half by going small, with Banchero, in effect, playing the 5. Through it all, the Blue Devils continued to do what they’ve done throughout the tournament. Coach K’s team drove the ball into the paint and converted 14 of their 25 2-point tries.

Neither team found the range from the perimeter, as Duke and UNC combined to shoot just 5-of-25 on their 3s. That represents a decided shift for Brady Manek, who entered the contest as the tournament’s most prolific 3-point shooter.

The Blue Devils limited Manek to just 0-of-2 shooting from beyond the arc in the first half. Caleb Love also missed all four of his attempts from outside. UNC was fortunate that Davis stepped up in such a big way.

With Williams likely playing more than five minutes in the second half, and with one or both teams at last hitting some shots from outside the paint, the end of this contest could be even more entertaining. — John Gasaway

Paolo Banchero has 10 points in the first half, the latest coming on this sweet 3-pointer.

Mark Williams throws it down

There are more authoritative ways to put your team on the board in a Final Four game … but not many.

WATCH YOUR HEADS WHEN MARK WILLIAMS IS AROUND 😱 #MFinalFour pic.twitter.com/ce9IN09vRD

Potentially Coach K’s final game coming against his archrivals after losing to them in his final regular season home game? This one could be good.

I’m locked in. Could be one of the best college basketball games of all time #MFinalFour

Various shades of blue are well-represented for both squads in the Big Easy.

McCormack and KU just too much for Nova

Everyone will remember the poster dunk by David McCormack, but the truth is the Kansas senior was too much for Villanova to handle all night long in the Jayhawks’ 81-65 victory.

First, the dunk. With a little more than 10 minutes remaining in the second half, McCormack slammed home two points despite the best and ultimately futile efforts of Jermaine Samuels to stop him. A euphoric McCormack leapt into the air and began patting the top of his own head, undoubtedly a reference to the fact that he had just dunked on someone else’s.

McCormack had every right to celebrate. His 25 points on the evening represented his highest scoring game since December of 2019. He required just 29 minutes and 12 shots to advance his team to Monday’s national title game.

Not that McCormack didn’t have help. Ochai Agbaji hit six 3-pointers, and Christian Braun came alive with 10 points after halftime. Kansas made 13 3-pointers, its most productive showing outside the arc since February.

WHAT CAN BRAUN DO FOR YOU 🤯🤯

For the record, Villanova also connected 13 times on 3s. After a slow start, Collin Gillespie got rolling and hit five 3s on his way to 17 points.

The Wildcats hung around and at one point cut the lead to six. But every run by the Wildcats was answered by another score by McCormack or Agbaji.

If it’s any consolation to Wright’s men, their year ended as the greatest free throw shooting team in men’s Division I history. Villanova made 83% of its free throws this season, breaking a record set by Harvard in 1984.

The Wildcats were 8-of-10 at the line in their final outing, but that wasn’t nearly enough to stand in the way of the Jayhawks playing for a title on Monday night.

Enjoying this back home 👏 pic.twitter.com/hw7tEk6uEe

The version of Kansas that outscored Miami 47-15 in the second half of last weekend’s regional final returned with a vengeance early against Villanova. Agbaji rang up 12 points, and the Jayhawks drained seven 3s on their way to a 40-29 halftime lead over the Wildcats.

Jayhawks are off and running in NOLA

Self’s team was dominant on both sides of the ball for much of the first half. Agbaji made a 3 on the first possession of the night, and at the other end, KU repeatedly trapped and frustrated the usually unflappable Gillespie.

Kansas started the game with a 10-0 run, and the Jayhawks were in control throughout the first 15 minutes. Then the Wildcats capped their own 10-0 run with three offensive rebounds on a single possession by Brandon Slater. The hard work on the glass by Slater resulted in a Gillespie 3, and a frustrated Self called timeout.

.@Colling1021 for three 🎯@NovaMBB getting back on track #MFinalFour pic.twitter.com/NXA0DJ0QN7

The thinking going into the game was that the Jayhawks could use their size to gain an advantage. McCormack made that look wise with 13 first-half points, many of which came early on post-ups deep in the paint.

If there was one surprise, however, it’s that KU has been unable to put that size to good use on its defensive glass. Villanova pulled down nine offensive rebounds, and those second chances are about the only thing keeping the Wildcats in this game.

Villanova has to be happy that Christian Braun and Remy Martin have combined for just three points. Then again, Kansas hasn’t needed them. Agbaji and McCormack have carried the load for an offense that scored 40 points in just 30 possessions.

The game is being played at the Wildcats’ preferred pace, but Wright’s team hasn’t been able to get stops. One adjustment that could help in the second half? Watch to see if Villanova’s defenders stay on Agbaji and refuse to help on dribble penetration. — John Gasaway

It has been tough making the call on ⁦@DukeMBB⁩ vs ⁦@UNC_Basketball⁩ due to trying to assess value to the EMOTION involved but finally my VBDI says DUKE 83- UNC 77! The GOAT gets another game to coach ! ⁦@ESPNPR⁩ pic.twitter.com/QZs4eLyuZd