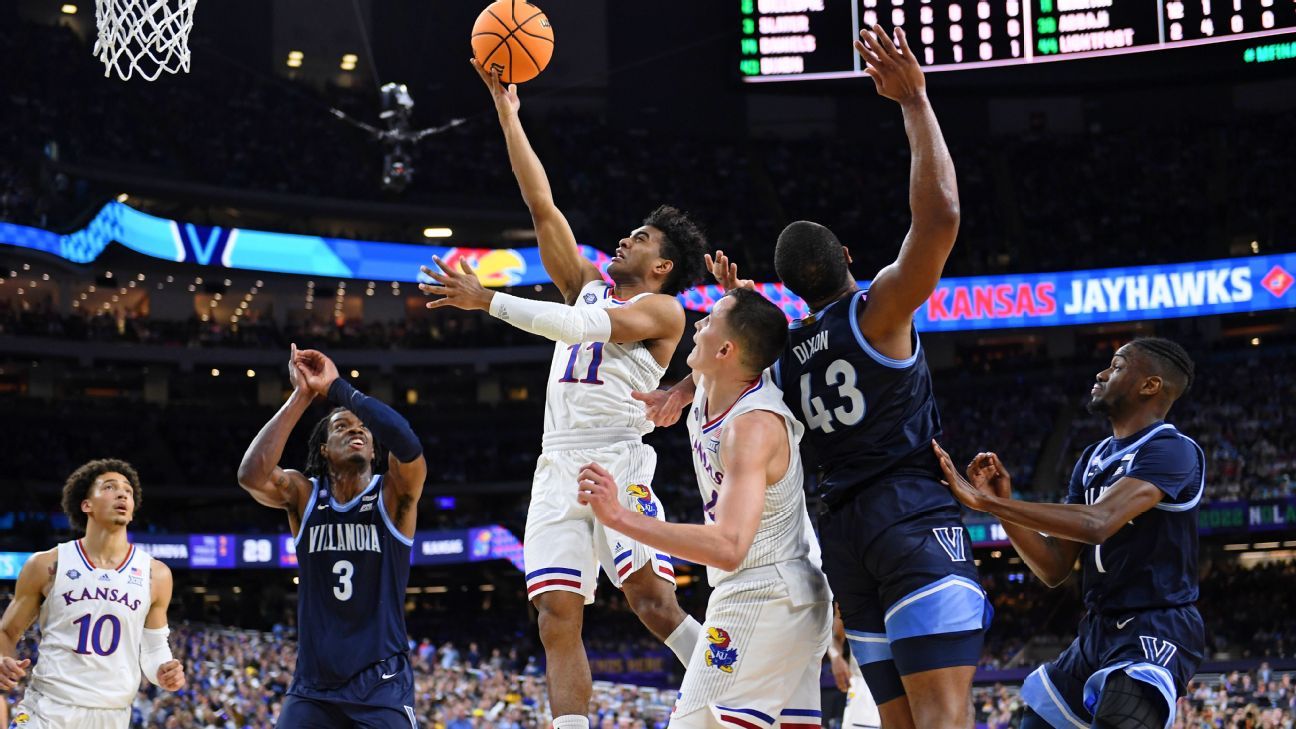 The calendar has turned to April, but we’ve reached the penultimate night of March Madness. Saturday’s 2022 Final Four action in New Orleans features the bluest of blue-blood matchups and ticket prices to match.

The No. 2 seed Wildcats faced the No. 1 seed Jayhawks to start the night. It was the fourth time Kansas coach Bill Self and Villanova’s Jay Wright have faced off with these schools in the Sweet 16 or beyond. Each time the winner has gone on to win the title — which is a positive precedent for Self’s squad, who came out on top, 81-65.

Then the Tobacco Road rivalry between Duke and UNC takes on new stakes. These schools, separated by about eight miles, meet for the first time in the Final Four. It will be UNC coach Hubert Davis’ first Final Four as a coach and Duke coach Mike Krzyzewski’s last. Coach K has won 101 NCAA tournament games. Two more and he’ll close his legendary career in storybook fashion.

On the court, Duke should have the talent advantage. The Blue Devils have two of the top eight draft prospects in this year’s class. Paolo Banchero is Duke’s leading scorer, averaging 17.1 points.

We have analysis and best moments from each game.

Piling on the points

Five different Kansas players have cashed in on a 3-pointer tonight and this one came in dramatic fashion as Christian Braun beat the shot clock buzzer.

WHAT CAN BRAUN DO FOR YOU 🤯🤯

A significant chunk of the Jayhawks’ offense has been from behind the arc, but this reminder from McCormack shows the damage they can do at the rim.

The Wildcats have been trying to claw their way out of a double-digit deficit for most of the game, and this 3-pointer from McDaniels was a big contribution to the team’s comeback effort.

The version of Kansas that outscored Miami 47-15 in the second half of last weekend’s regional final returned with a vengeance early against Villanova. Ochai Agbaji rang up 12 points and the Jayhawks drained seven 3s on their way to a 40-29 halftime lead over the Wildcats.

Jayhawks are off and running in NOLA

Bill Self’s team was dominant on both sides of the ball for much of the first half. Agbaji made a 3 on the first possession of the night, and at the other end KU repeatedly trapped and frustrated the usually unflappable Collin Gillespie.

Kansas started the game with a 10-0 run, and the Jayhawks were in control throughout the first 15 minutes. Then the Wildcats capped their own 10-0 run with three offensive rebounds on a single possession by Brandon Slater. The hard work on the glass by Slater resulted in a Gillespie 3, and a frustrated Self called timeout.

.@Colling1021 for three 🎯@NovaMBB getting back on track #MFinalFour pic.twitter.com/NXA0DJ0QN7

The thinking going into the game was that the Jayhawks could use their size to gain an advantage. David McCormack made that look wise with 13 first-half points, many of which came early on post-ups deep in the paint.

If there was one surprise, however, it’s that KU has been unable to put that size to good use on its defensive glass. Villanova pulled down nine offensive rebounds, and those second chances are about the only thing keeping the Wildcats in this game.

Villanova has to be happy that Christian Braun and Remy Martin have combined for just three points. Then again, Kansas hasn’t needed them. Agbaji and McCormack have carried the load for an offense that scored 40 points in just 30 possessions.

The game is being played at the Wildcats’ preferred pace, but Jay Wright’s team hasn’t been able to get stops. One adjustment that could help in the second half? Watch to see if Villanova’s defenders stay on Agbaji and refuse to help on dribble penetration. — John Gasaway

It has been tough making the call on ⁦@DukeMBB⁩ vs ⁦@UNC_Basketball⁩ due to trying to assess value to the EMOTION involved but finally my VBDI says DUKE 83- UNC 77! The GOAT gets another game to coach ! ⁦@ESPNPR⁩ pic.twitter.com/QZs4eLyuZd