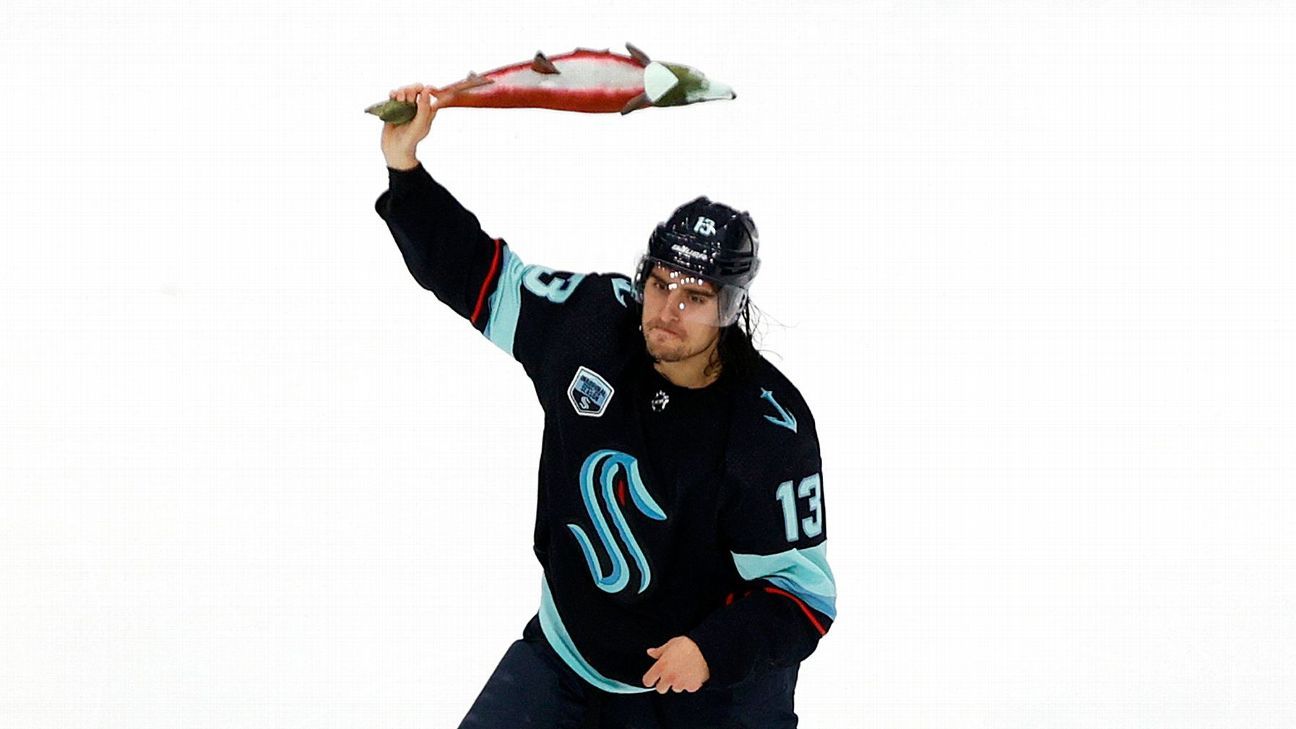 The NHL’s newest team is putting a Seattle spin on one of the league’s oldest traditions.

The expansion Seattle Kraken won at home for the first time Tuesday night, thanks in part to goalie Philipp Grubauer‘s 23-save effort. He was named one of the “Three Stars of the Game,” a postgame honor given to players from either team for an exemplary effort.

Typically, players from the home team will skate out and wave to the appreciative fans; in some cases, they’ll toss a souvenir puck or stick into the rows closest to the ice.

But in Seattle, the stars of the game throw a stuffed fish at the fans.

“I was like, ‘Who came up with that?'” Grubauer said after the game, laughing.

When it was his turn to acknowledge the crowd, Grubauer skated out holding a plush sockeye salmon that he had autographed moments earlier. He was accompanied by members of the Kraken’s game-night crew dressed in rubber aprons commonly worn at fish markets.

One of them offered Grubauer the chance to use a slingshot to sail the salmon, but Grubauer instead hurled the toy fish to the crowd, just getting it over the glass.

Teammate Brandon Tanev, the game’s first star, took his salmon and waved it over his head like a rally towel before throwing it to a fan.

Thus, a tradition was born in Seattle.

“It was pretty funny. I’ve never seen that before. Obviously with [Pike Place] Market, you toss the fish, it makes sense,” Grubauer said in reference to one of the city’s top tourist destinations. “It’s my first time not tossing a puck or a stick in the stands.”

The fish toss idea came from the Kraken’s game-night experience team, which includes Jonny Greco and Ayron Sequeira, both of whom helped craft the memorable arena motifs for the expansion Vegas Golden Knights before heading to Seattle for their launch.

The team started thinking about how they could rethink the Three Stars of the Game moment after home contests for the Kraken.

“It’s always done so similarly, and it feels like the same fans always walk out of the arena with the players’ sticks,” she said. “If you’re seated in the lower bowl, you have access to the glass. There’s not much equality in that.”

The Kraken game operations team wondered whether they could create a gimmick for Three Stars that might spread the wealth. One idea was T-shirts, which have proved to be reliable projectiles inside of arenas, especially when a slingshot or a cannon is involved.

“OK, but a T-shirt is kind of basic,” Sequeira said. “What else could we do?”

One of the mantras for the creative team is to consider the city’s own traditions in creating the game-night presentation elements. So the team thought about Seattle, and people’s thoughts led them to one of the most iconic parts of the city.

“There’s no greater tourist moment than the fish toss down at Pike Market,” Sequeira said. “So we thought, ‘What if we could toss a fish?'”

It was never going to be a real fish. Detroit has its octopuses and the catfish fly in Nashville, but using an actual animal like that “isn’t something that would ever be part of our ethos,” Sequeira said.

“The non-living yet real fish was not an option,” she said. “But even using a plush, we wanted to make sure it was not going to be offensive.”

The Kraken hired an Indigenous peoples consultant who acts as a filter for some of their ideas. The team wanted to make sure that tossing a salmon — even a faux one — wouldn’t be taken as an insult from Indigenous peoples.

“We were told that fish, and salmon in particular, are very important to the people of this area. That they should be treated with respect,” Sequeira said. “They didn’t tell us ‘no,’ but they stressed how important they are to the area.”

After that, the team secured a company in Canada to produce the plush salmon. Since the Kraken wanted to make sure they were as close to the real thing as possible, they used Bristol Bay Native Corp. in Alaska to review the prototype. Their fish expert said the colors were a little off and the head was positioned incorrectly for a healthy adult fish. So it was back to the drawing board, until the Kraken received a fish that passed the smell test.

Each plush salmon weighs just over half a pound. They’re also exactly 22 inches in length because that’s what the legal catch length needs to be in Washington State.

The Kraken were asked by Bristol Bay Native Corp. about including a fact sheet about sustainable salmon fishing with the toy fish. The team agreed, and each fish that flies into the stands will have a tag with five facts about sustainability, with information like: “all Pacific salmon species on the West Coast of the United States have experienced population decline.”

The players didn’t know about the new fish toss tradition before being handed one during the Three Stars of the Game celebration.

“I think it was a stuffed fish or something,” Tanev said. “You just go out there and put a smile on your face and give it to one of the fans out there.”

The Kraken made sure they’ll have enough fish in the barrel for the entire regular season.

“You plan for excellence,” Sequeira said. “So you plan for three Three Stars for 41 home games and then a few extra.”

As for the future of the new tradition, Sequeira said the plan is to create a plush version of a different species of salmon for every Seattle season.

For now, Sequeira’s focus is on spreading the salmon beyond the front rows of Climate Pledge Arena. They don’t fit inside a regulation T-shirt cannon, so she’s hoping one of the players will use the slingshot.

“We wanted it to fly. We wanted it go further than the first few rows,” she said. “That’s my goal.”