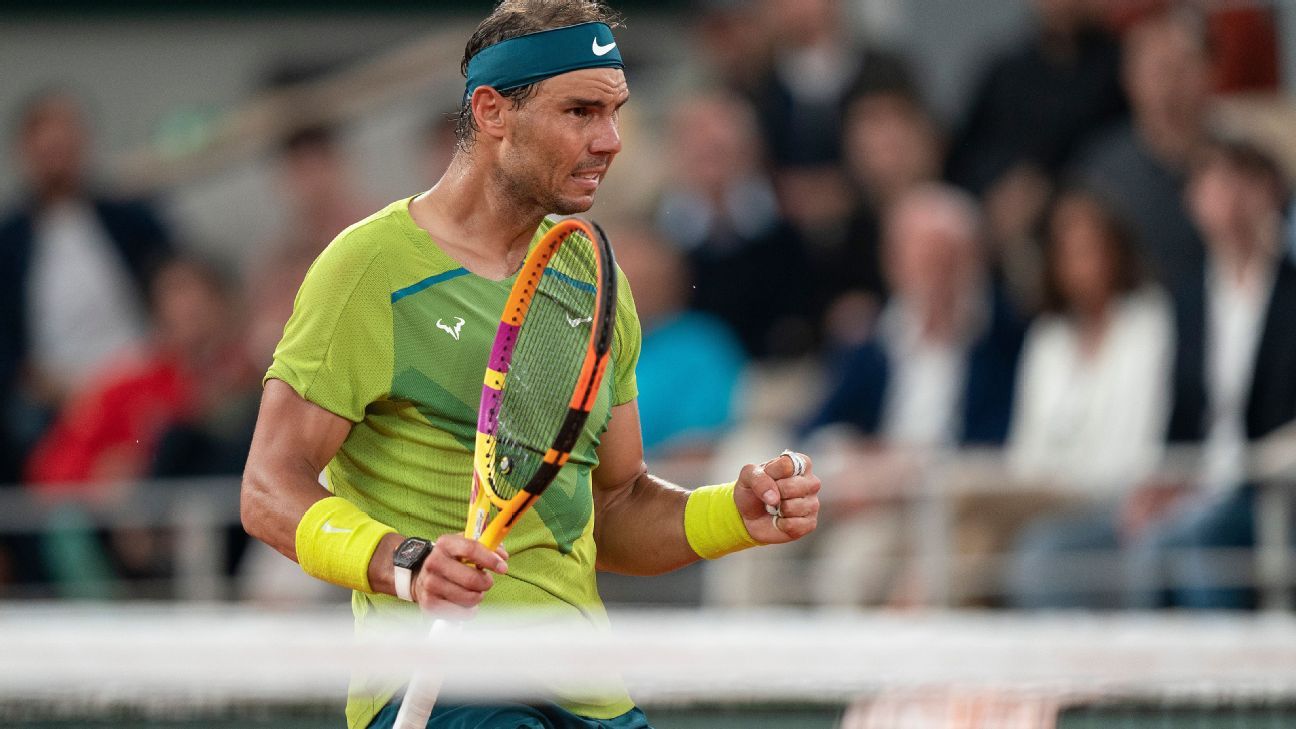 PARIS — Experience vs. Youth. It is an age-old argument that will be on display in the men’s final at the French Open on Sunday as Rafael Nadal takes on Casper Ruud of Norway for the title.

Nadal will be the big favorite to extend his incredible record-setting tally of victories in Paris, but Ruud will make history as the first Norwegian to play a Grand Slam singles final in the Open era.

That’s the number of Roland Garros titles Nadal already owns, and having beaten Novak Djokovic and Alexander Zverev, the momentum is with the Spanish veteran.

But he’s also giving away 13 years to Ruud, who has battled his way to a first Slam final. At 36, can Nadal win yet again or will Ruud grasp his chance of glory? We’ll have live updates throughout the match here:

Why Rafael Nadal will win

Because he’s Rafael Nadal, and this is Roland Garros. The King of Clay is back in another final on the court he loves the most, and having won all 13 finals he has played in at Roland Garros, he knows exactly what he’ll have to do to win.

The way he raised his game to beat Djokovic in another epic battle in the quarterfinals showed why he’s still the best player in the world on this surface, on Court Philippe Chatrier, where the extra room around the court allows him to come up with such incredible winners.

The pair have never played each other on the ATP Tour, but Nadal knows Ruud well, having had him to his academy in Mallorca a few years ago. The pair played many practice sets together.

When Nadal was playing Jordan Thompson earlier in the tournament, at one stage the Australian shouted out: “best player in the world and still he gets the luck,” as a Nadal net cord landed his side.

And the 36-year-old will benefit from his semifinal with Zverev that lasted only three hours because the German player suffered a nasty ankle injury at the end of the second set. Had the match gone on — and proceeded at the same speed – it might have lasted five or six hours.

We never know what’s going on behind the scenes, but it seems that Nadal’s chronically problematic left foot has held up well so far, a near miracle given how much pain he was in during the Rome Masters a few weeks ago.

It’s worth remembering that if Nadal wins, he not only wins Grand Slam title No. 22 but also would be halfway to the calendar-year Grand Slam for the first time in his career, which would make Wimbledon a temptation, although he still might end up resting his foot instead.

If he is physically sound, Nadal knows how to get the job done in the final. It would be a massive surprise if he doesn’t.

Why Casper Ruud will win

🎙️ “It’s a dream to be able to play a Grand Slam final”@CasperRuud98 speaks on today’s win and looks ahead to Sunday’s final:#RolandGarros

Ruud is the first Norwegian man to reach a Grand Slam final, and he fully deserves his place, having begun his campaign with a difficult match against France’s darling, Jo-Wilfried Tsonga, and seen off a number of more experienced foes along the way, including Marin Cilic in the semis.

Ruud also is at his best on clay, as he showed in 2021, when he won four of his five titles on the surface, integral to his rise into the world’s top 10.

The Norwegian player is calm on court, and his tennis is equally calm, his thought processes clear. The only contrast is the venom of his forehand, which can cause real damage, as Cilic found out in the semis, when 35 winners flew past him.

Although he’ll be appearing in his first Slam final, and will almost certainly be nervous, Ruud has the kind of demeanor that suggests he will cope. He also has a very uncomplicated game, a good serve, excellent groundstrokes and superb movement, which should ensure he doesn’t let the occasion hit him too badly.

Moreover, though he has not played Nadal in an official match, Ruud has had the chance to see him up close, playing plenty of sets against him in practice when he visited Nadal’s academy a few years ago.

Ruud said Nadal “always pretty much has always beaten me.”

“There’s been some close sets, 7-6, 7-5, but it always goes his favor — but it’s because we are playing in the academy and I want to be nice to him and give him the [win],” Ruud said with a smile.

There is a quiet confidence about Ruud and a sense that he feels he belongs. There would be no finer way of showing it than to beat Nadal on Sunday.

The #RolandGarros men’s singles final is 🔒’d in. pic.twitter.com/KOZWc2NkKs

It’s just impossible to go against Nadal with any conviction. The chances are that Ruud might live with him for a while, maybe even take a set, but that the effort of doing so will leave him with nothing left. It’s Nadal’s to lose. — Cambers