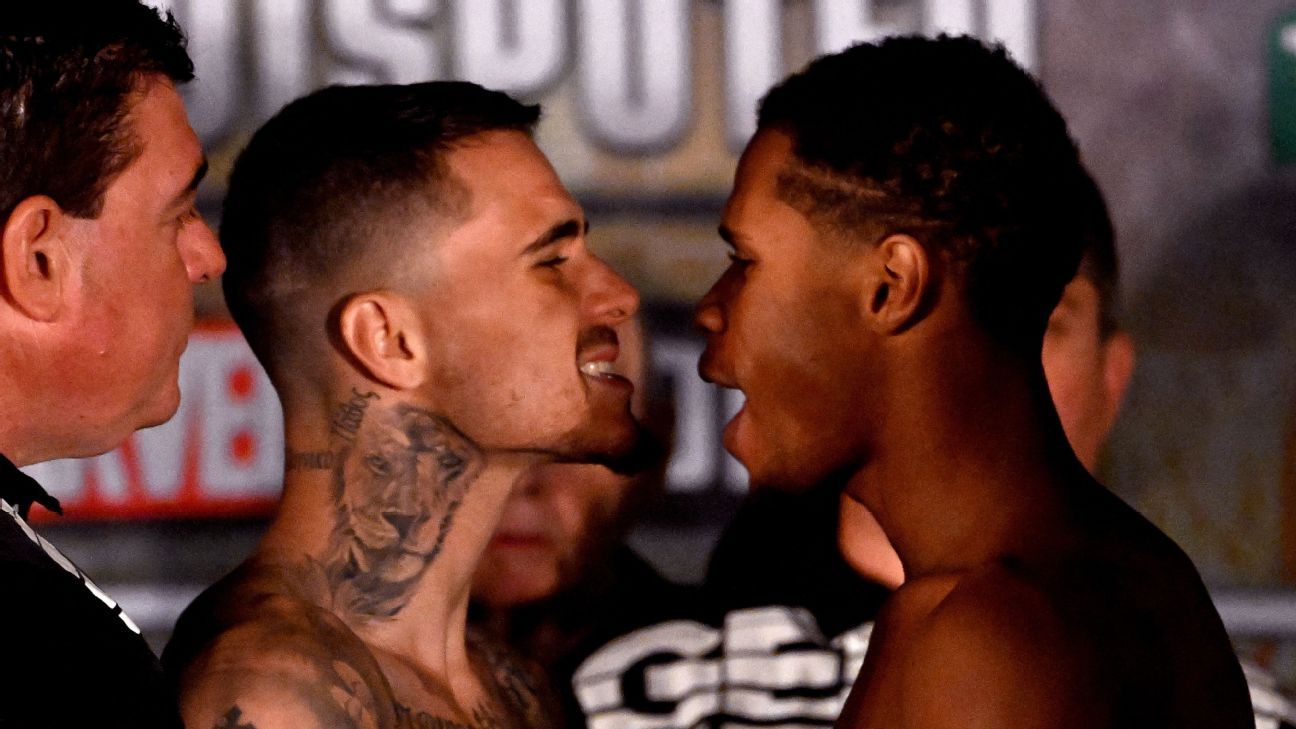 George Kambosos Jr. puts his WBO, WBA, IBF and WBC “franchise” lightweight titles on the line against WBC champion Devin Haney on Saturday, in the main event of a Top Rank card at Marvel Stadium in Melbourne, Australia (9 p.m. ET on ESPN/ESPN+ with prelims at 7:30 on ESPN+).

Kambosos (20-0, 10 KOs) won his titles against Teofimo Lopez Jr. by unanimous decision in a big upset back in November. He was supposed to face Vasiliy Lomachenko, but Lomachenko decided to stay in his home country of Ukraine after the Russian invasion, and Haney got the call.

Despite fighting at home and having three of the four major belts, Kambosos is a slight underdog (+155) against Haney (-180), according to Caesars Sportsbook.

Haney (27-0, 15 KOs) won the WBC interim title in 2019, but was then elevated to full champion when the WBC named Lomachenko its “franchise” champion. Haney has made four defenses, including a unanimous decision victory over Joseph “JoJo” Diaz in December.

“This is the biggest stage, but this is something that I have dreamed of,” Haney said. “I knew that one day I would be here, but I didn’t think that it would come this early, but I’m thankful. It’s time … I feel like I’m the far better fighter. I have far more skills than him.”

Jason Moloney, after four fights stateside, returned to Australia with a statement.

The 31-year-old scored a third-round TKO of Aston Palicte in a bantamweight fight, the chief-support bout to George Kambosos Jr. vs. Devin Haney.

Moloney (24-2, 19 KOs) floored Palicte with a short right hand before a barrage of shots led to referee Ignatius Missailidis stepping in as Palicte was falling down a second time. The time of the stoppage was 2:35.

The twin brother of Andrew Moloney, who was also set to compete on this card, Jason Moloney is rated No. 7 by ESPN at bantamweight. The victory was Moloney’s third straight since a seventh-round KO loss to unified champion Naoya Inoue in 2020.

Lucas Browne stuns the announcers and the Australian crowd with this knockout in the first round of his fight against Junior Fa.

Browne, a native of Australia, sent Fa crashing to the mat with an overhand right on the ear, then finished off Fa with another single right hand to the head.

Browne (31-3, 27 KOs) had the biggest win of his career in 2016 when he scored a 10th-round TKO of a faded version of Ruslan Chagaev, but lost three fights inside the distance since then, including a first-round TKO last year to journeyman Paul Gallen.

Fa (19-2, 10 KOs), a 32-year-old from New Zealand, was competing for the first time since he dropped a decision to former heavyweight titleholder Joseph Parker in February 2021.

Lachlan Higgins and Terry Nickolas battled to a majority draw in a six-round junior middleweight bout.

Higgins (7-4-2, 2 KOs) and Nickolas (2-1-1, 2 KOs) engaged in an exciting scrap between two domestic-level fighters from Australia, but couldn’t produce a winner. The bout was the final preliminary matchup before the main card begins.

In a five-round women’s flyweight bout, Taylah Robertson improved to 5-1 (with 1 knockout) with a shutout unanimous decision over Sarah Higginson. All three judges scored the bout 50-45. It was Robertson’s first fight at 112 pounds.

Robertson, a 24-year-old Australian, will fight again in 10 days in her home country. Higginson, meanwhile, lost for the first time as a pro, falling to 3-1-1, 1 KO.

Yoel Angeloni successfully made his pro debut with a unanimous-decision victory over Ken Aitken in a four-round welterweight bout.

The 18-year-old was forced to contend with a nasty gash over his left eye following a clash of heads. He was a member of the Cuban National Youth Team before he continued his amateur career in Italy, where he now resides.