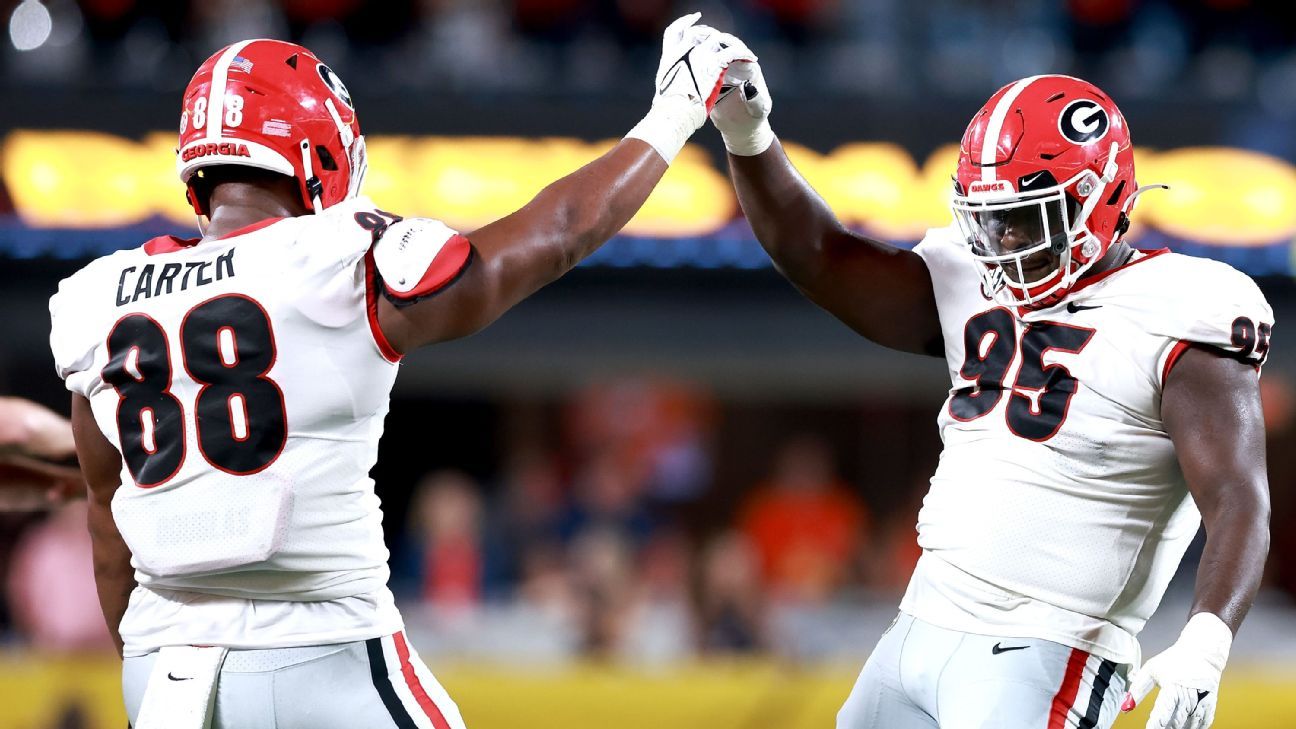 Georgia jumped three spots to No. 2 behind Alabama in The Associated Press Top 25 released Tuesday, giving the SEC the top two teams in the country for the 30th time in the 85-year history of the college football poll.

It is the second time in the past three seasons and the third in the past five that the SEC is sitting 1-2 in the Top 25. Alabama and LSU had a four-week run as Nos. 1 and 2 in the 2019 season before they played each other.

The Crimson Tide strengthened their hold on No. 1 after throttling Miami. Alabama received 59 first-place votes, up from the 47 it had in the preseason poll.

Ohio State moved up to No. 3, and Oklahoma dropped two spots to No. 4 after a narrow win over Tulane. Texas A&M is fifth, giving the SEC three teams in the top five.

Clemson fell three spots to sixth, marking the first time the Tigers have been out of the top four since 2017. Clemson dropped as low as No. 7 that season before finishing fourth.

No. 7 Cincinnati and No. 8 Notre Dame moved up one spot each. Iowa State dropped two places to No. 9, one spot ahead of No. 10 Iowa heading into their rivalry game Saturday.

Alabama and Georgia finished 1-2 in the Top 25 in 2017, when the Crimson Tide beat the Bulldogs in overtime in the an all-SEC College Football Playoff game. Alabama and Georgia also spent two weeks in that regular season at Nos. 1-2.

One conference has held the top two spots 76 times since the AP poll started in 1936, none more than the SEC. The now-defunct Big Eight is next with 23.

• No. 16 UCLA is ranked for the first time since a brief stay at No. 25 in 2017, Jim Mora’s last season as coach of the Bruins. It has been a slow climb back for UCLA under Chip Kelly, but a 2-0 start and a 38-27 victory over LSU pushed the Bruins into the rankings. LSU dropped out of the rankings from No. 16.

• No. 19 Virginia Tech moved into the rankings after beating ACC rival North Carolina. This is the sixth straight season the Hokies have been ranked for at least one week, though Virginia Tech has not finished in the Top 25 since 2017. The Tar Heels fell 14 spots to No. 24.

• No. 20 Ole Miss was not far outside of the rankings to start the season and earned its first poll appearance since early in the 2016 season by beating Louisville.

• No. 25 Auburn grabbed the final spot and has now been ranked for at least one week in nine straight seasons.

Eight Top 25 teams lost over the holiday weekend, though five were beaten by another ranked team.

• Indiana, ranked in the preseason for the first time since 1969, is unranked after getting blown out at Iowa.

• Washington dropped out after a 13-7 loss to FCS power Montana. The Huskies became just the fifth ranked team to lose to an FCS team in the history of the AP Top 25.

• Louisiana received its first preseason ranking in school history but dropped out after losing decisively at Texas.

No. 12 Oregon at No. 3 Ohio State. The pandemic cost the Ducks their home game in this series last year. It’s the teams’ first regular-season meeting since 1987.