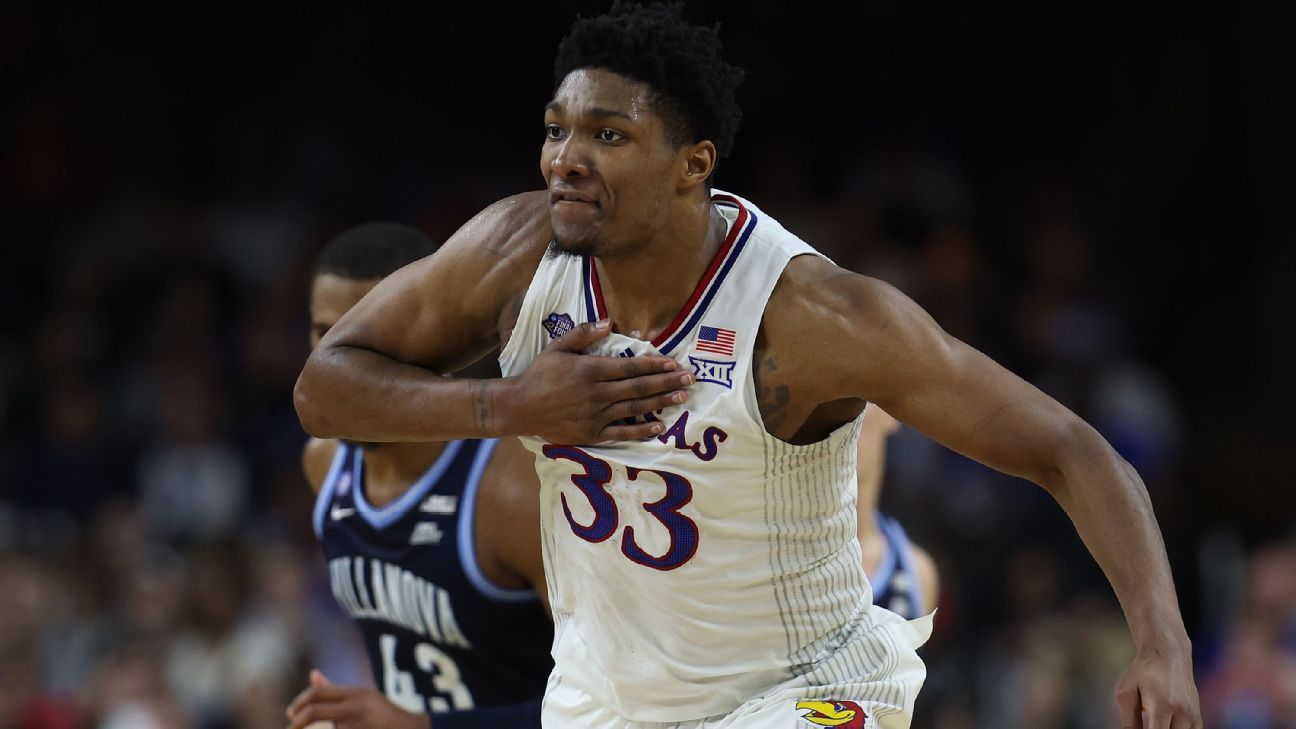 NEW ORLEANS — The Kansas Jayhawks got the 2022 Final Four off to a smoking start on Saturday night, running out to a 10-0 lead and keeping the Villanova Wildcats at arm’s length the rest of the way in an 81-65 win at the Caesars Superdome. The victory puts KU in Monday night’s title game for the first time since 2012, with a chance to hoist the NCAA trophy for the first time since defeating Memphis for the 2008 championship.

The contest offered a prelude to Saturday’s much-anticipated second matchup between the Duke Blue Devils and North Carolina Tar Heels — the first NCAA tournament meeting between the Tobacco Road rivals, and the possible last act for Duke head coach and Hall of Famer Mike Krzyzewski on what will be the final weekend of his storied college basketball career.

ESPN’s team of Myron Medcalf, Jeff Borzello, John Gasaway and Joe Lunardi discussed what went right for Kansas on Saturday, what went wrong for Villanova and what the impact would be of a Kansas victory over an ACC school in the final on Monday night.

What was the key to Kansas’ win over Villanova?

Agbaji snapped out of a brief slump in the second half of the Elite Eight win over Miami, and that momentum carried over on Saturday night. He came out of the gates gunning, hitting two 3s in the first three minutes and going 4-for-4 from deep in the opening eight-plus minutes. Collin Gillespie switching onto him slowed Agbaji down some toward the end of the first half, but two more backbreaking 3s to keep Villanova at an arm’s length in the second half were huge.

McCormack was always going to be the key against Villanova. The Wildcats simply didn’t have the size to handle him, so it came down to whether he could stay out of foul trouble, stay on the floor and be effective. And it didn’t take long for Kansas to make its intentions known. The Jayhawks were forcing the ball in the post to McCormack early and often; he scored two baskets in the opening two minutes and was getting touches on nearly every possession. He had 13 points in the first 11-plus minutes. When Villanova started causing some issues for Kansas defensively by attacking McCormack with smaller players, the big man responded by going to work at the other end. Agbaji and McCormack finished with a combined 46 points. — Borzello

What surprised you most about the Jayhawks’ performance?

If you could tell KU fans in November that the hero of their national semifinal would be McCormack, they would be more than surprised. Stunned might be a better word. There have been lengthy discussions all season long about whether the Jayhawks should go small. For one night, at least, McCormack went really big on Villanova. The surprise within the surprise was that it started right away. The first minutes of the game were a blizzard of Agbaji 3s and post feeds to McCormack, who was just too much for the Wildcats to handle. The poster dunk, putting up 25 points on 10-of-12 shooting — it all summed up to a magnificent performance. — Gasaway

How does Kansas match up with Duke and North Carolina?

Unsurprisingly, the Jayhawks likely match up better with North Carolina than Duke. Part of it stems from Mark Williams‘ defensive dominance around the rim for the Blue Devils. He is capable of neutralizing McCormack on his own down low — and given how well McCormack has played in Kansas’ wins over the past couple of seasons, that would pose a problem for the Jayhawks. Duke also is vulnerable against teams that can draw Williams away from the basket and force the Blue Devils to guard for longer stretches in space.

In terms of personnel, the Jayhawks have experienced big men down low in McCormack and Mitch Lightfoot to throw at North Carolina’s Armando Bacot. They have Jalen Wilson, who is big enough and versatile enough to deal with Brady Manek on the pick-and-pops North Carolina likes to run. I do think the Tar Heels’ aggressiveness defensively on the wings with Caleb Love and Leaky Black could cause issues for Agbaji and Christian Braun, though. None of this is to say that Kansas can’t beat Duke. It’s just potentially a tougher matchup than North Carolina. — Borzello

What will be the legacy of this Villanova team?

The Wildcats continue to demonstrate the rarity of basketball excellence without big-time football. Villanova and Gonzaga are the only truly elite programs in that category.

The legacy of Jay Wright and the Wildcats is secure regardless of this Final Four result. In what was arguably the most limited team of his four to reach the national semifinals, Wright did another masterful job in winning the Big East tournament and the NCAA South Regional.

The 2021-22 Cats should and will be celebrated among the most beloved teams in program history. And when they build a statue for Wright someday, Gillespie will join Scottie Reynolds, Ryan Arcidiacono and Jalen Brunson as the coach’s personal Mount Rushmore. — Lunardi

What would be the historical impact of a Kansas win on Monday night?

Bill Self has done everything there is to do at Kansas but knows the single national championship in 2008 isn’t commensurate with 15 Big 12 titles and a staggering nine No. 1 seeds in the NCAA tournament. Cutting down the nets in New Orleans changes that narrative permanently.

The list of coaches with multiple NCAA championships is a short one. And a fourth trophy for the Kansas program would place the Jayhawks behind only five other schools on the all-time list, one of which — North Carolina (6) or Duke (5) — would be their victim on Monday.

It says here that the Jayhawks are due. They were the best team in the country two years ago when COVID-19 derailed their tourney chances, and they might very well be the best team remaining in 2022. — Lunardi