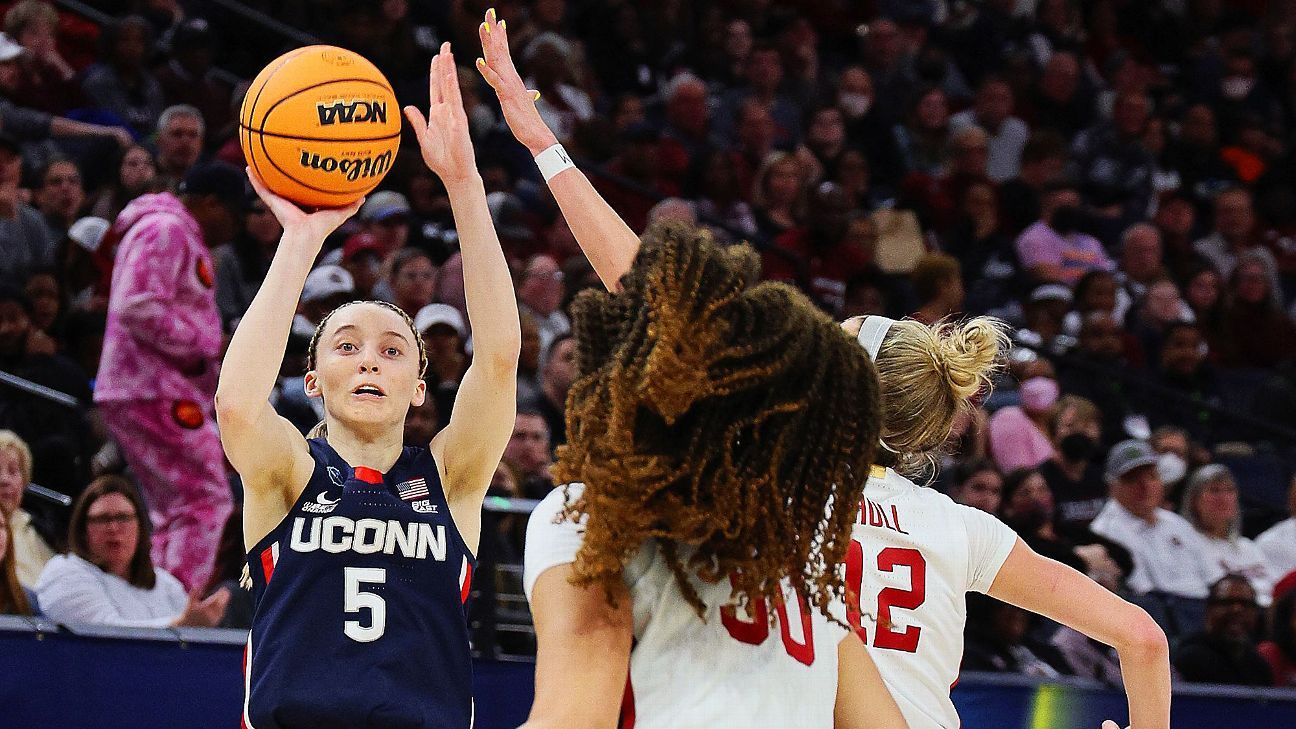 In a nonconference game on Nov. 22 this season, the Gamecocks beat the Huskies 73-57 in a 1-2 showdown in the Battle 4 Atlantis in the Bahamas.

UConn is back in the NCAA title game for the first time since 2016 after eliminating the defending champion Stanford Cardinal 63-58.

Earlier Friday, the Gamecocks beat the Louisville Cardinals 72-59 in a battle of No. 1 seeds. Aliyah Boston had 23 points and 18 rebounds for her 29th double-double this season. The consensus national player of the year led the Gamecocks to the national championship game a year after a heartbreaking one-point loss in the semifinals.

South Carolina advances to its second NCAA title game. In their only other appearance, the Gamecocks won the 2017 NCAA title.

ESPN’s Katie Barnes, Charlie Creme, Alexa Philippou and Mechelle Voepel break down the Final Four and take a quick look ahead at the title game.

UConn’s Evina Westbrook shows off her range as she sinks back-to-back 3-pointers in the second quarter.

Stanford shot 34.8% from the field, 4-for-23 on 3-pointers, struggled to score in the paint and shot 11-of-26 on uncontested shots. What did UConn do defensively to cause Stanford’s offensive woes — or did the Cardinal just have an off shooting night?

Barnes: Both teams struggled from the field for much of the game, but UConn clamped down defensively. The Huskies mixed up their defensive looks early on with a zone, and matched up with the Cardinal for most of the game. That became a considerably more difficult task as multiple UConn players got into foul trouble, including Olivia Nelson-Ododa and Aaliyah Edwards. With Dorka Juhasz out with a fractured wrist, UConn went with a four-guard lineup, using Evina Westbrook and Nika Muhl off the bench. In addition to Edwards and Nelson-Ododa, freshman guard Azzi Fudd sat nearly the entire second quarter out with two fouls. The foul trouble did not cut both ways early in the game, though the gap closed late as Stanford began to foul to stop the clock.

But crucially, Stanford couldn’t buy a basket. The Cardinal shot just 34.8% from the field and 17.4% from beyond the arc, hampering their ability to capitalize off the early foul discrepancy and the Huskies’ 19 turnovers. Those UConn mistakes kept Stanford in the game. UConn beat Stanford on the boards, out-rebounding the Cardinal 45-36, which ultimately decided this game.

UConn’s seniors all stepped up at various points. How did they play a role in the Huskies’ win?

Barnes: Westbrook came off the bench in the second quarter and kept the Huskies afloat with a small lead by draining three 3s. Then, in the fourth quarter, Nelson-Ododa made a couple of key baskets down low, getting fouls called on the Stanford bigs, particularly Cameron Brink. Christyn Williams shot just 3-for-13 from the field, but hit a crucial 3, and her two free throws of the game gave UConn a four point lead with under 11 seconds left.

This group of seniors have been in head coach Geno Auriemma’s dog house not just this season, but over the course of their careers. But with the game and the season on the line, they stepped up to get the Huskies to their first national championship game since 2016. Incidentally, Geno Auriemma has never lost a championship final.

What was the difference-making stat in UConn’s win?

Creme: The numbers that most impacted this game can all be pulled from Stanford’s box score. The 3-point shooting that was a strength for the Cardinal all season, but was not good in Spokane (23.8%), was a disaster on Friday night. The looks were there. The results were not. Stanford’s 4 of 23 night from behind the arc was the kind of shooting it just could not overcome.

Tara VanDerveer also said during her in-game interview that her team wasn’t moving the ball quickly enough. The Cardinal only had 10 assists, tied for their second-lowest total of the season.

What’s your first impression of the NCAA final matchup, and what will decide the 2022 champion?

Creme: The Gamecocks and Huskies were supposed to play a second time this season, on Jan. 27. But the game was canceled as South Carolina prioritized making up an SEC game that was postponed by COVID-19.

It might come down to which team gets the most out of its least dominant position group. That will be where UConn’s bigs are so important.

Nelson-Ododa and Edwards have been productive in the tournament, and more than held their own against Stanford’s size. They will be the key against South Carolina. When the two teams met in November, the two totaled just 12 points and six rebounds, and the Huskies got pounded on the glass, 42-25. Boston put up 22 points and 15 rebounds. She has an uncanny ability to get opponents’ post players in foul trouble with her combination of strength and agility. With Juhasz unavailable, neither Nelson-Ododa nor Edwards can get saddled with fouls. With either off the court, Boston will likely dominate. If that happens, this game will look similar to the one in November. South Carolina will have a second national championship and hand UConn its first loss in a national title game.

South Carolina, the wire-to-wire No. 1-ranked team this season, notched its fourth victory over an AP Top-5 opponent this season. The Gamecocks improved to 34-2, matching their single-season record for wins in a season.

South Carolina responded every time Louisville made a run. What were the big adjustments the Gamecocks made to beat the Cardinals?

Check your bracket now that the Final Four of the women’s NCAA tournament is set. Play Tournament Challenge

Creme: Boston. Whenever South Carolina needs something big, it’s always Boston. The Gamecocks were in complete control with a 15-point lead in the third quarter, then got loose with the ball. The guards committed four turnovers, and there were a couple of missed layups. Louisville got within six, and suddenly it was a game again. Then Boston did her thing. In a 30-second stretch that bled into the fourth quarter, Boston scored five points and grabbed four offensive rebounds. She took over the paint and the backboards, and the lead ballooned back to 11. Louisville never threatened again.

Hailey Van Lith scored 20 points in all four of Louisville’s NCAA tournament games heading into the Final Four, but never got going Friday, with just two points in the first half. How did South Carolina disrupt her?

Barnes: Brea Beal got on Hailey Van Lith early, disrupting everything the Louisville sophomore tried to do. Beal, a 6-foot-1 junior guard, blocked two of Van Lith’s early shot attempts, turning those into scoring opportunities for South Carolina. Beal is a stellar defender, but her size and length also forced a smaller Van Lith to make more adjustments to get around her. And as a smaller guard — Van Lith is listed at 5-foot-7 — South Carolina’s size in the lane and Beal’s on the perimeter simply stifled all levels of her game. Van Lith couldn’t really get into the paint; she couldn’t get a pull-up jumper going; and she attempted three 3-point shots all game (all coming late in the fourth quarter). Van Lith competed hard until she was pulled from the game, but South Carolina successfully frustrated her early, and she never recovered.

What was the difference-making stat?

Philippou: Neither of these teams likes to take 3-pointers like, say, Creighton does, but Louisville hitting just one trey — and attempting only eight shots from behind the arc the entire game, including three in the final minute! — while South Carolina had made five by midway through the third quarter was a difference-maker.

Entering the game, Louisville averaged six made 3-pointers on 17 attempts from deep per game; the fact that they attempted just five 3s going into the final minute is a testament to how uncomfortable South Carolina’s defense made them. The Gamecocks 35% clip from 3 isn’t super impressive, but guards Destanni Henderson and Zia Cooke started 5-for-10 from the arc, which opened up the game. If the Gamecocks can hit timely 3s Sunday like they did Friday, they’ll be well positioned to cut down the nets.

Also, it should be noted that Beal (12 points, 5-for-7 shooting) was productive not just defensively, but offensively, taking advantage of open shots granted to her by Louisville’s defense that was too preoccupied with Boston. Beal has now finished with back-to-back games in double figures for the first time this season.

What’s one thing South Carolina must do even better in Sunday’s championship game?

Barnes: South Carolina did pretty much everything well on Friday night. The one area where the Gamecocks could stand to improve is taking care of the basketball. South Carolina averages 14.4 turnovers per game, and the Gamecocks were above average against Louisville with 15 turnovers. The Cardinals converted those extra possessions into 13 points on the other end. In addition to the turnovers, there were stretches when the guards just looked careless with the ball — throwing skip passes that hung in the air or trying to thread one too many needles. Not all of those decisions resulted in turnovers, but on Sunday, that might not be the case.