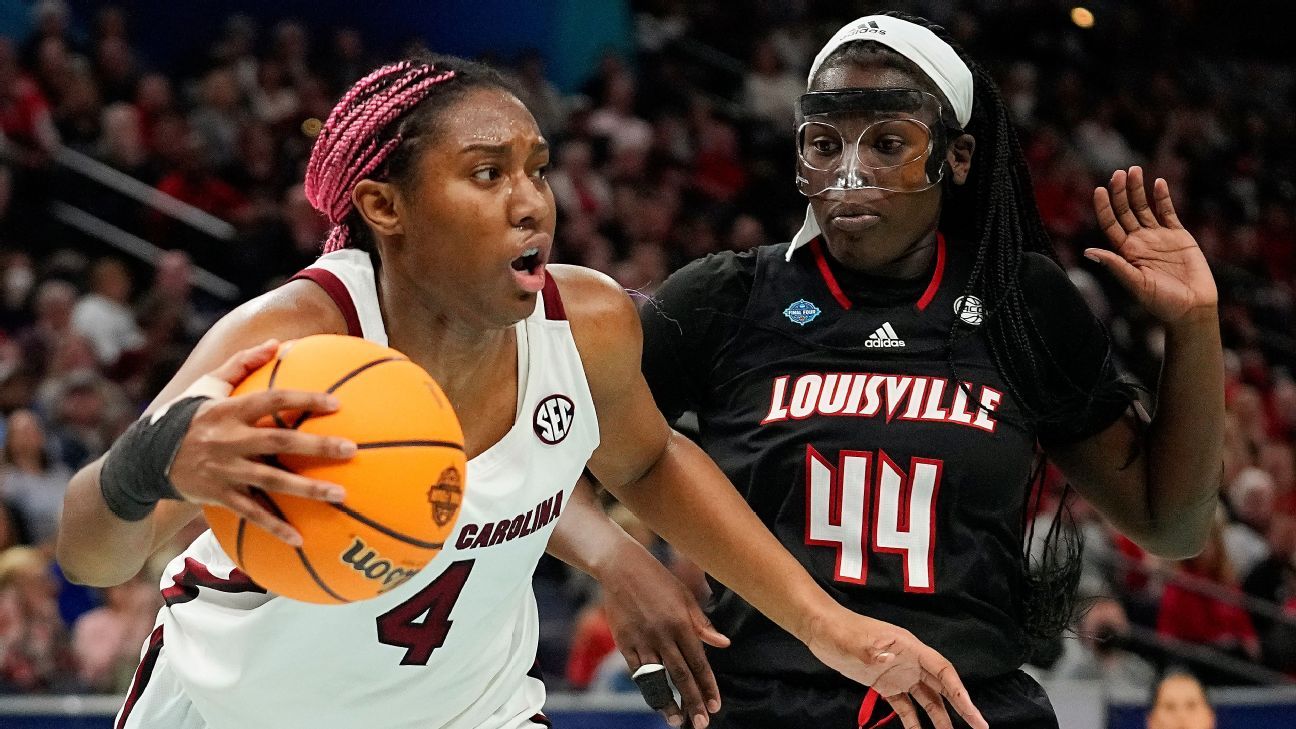 MINNEAPOLIS — The South Carolina Gamecocks beat the Louisville Cardinals 72-59 in a battle of No. 1 seeds on Friday in the women’s Final Four.

Aliyah Boston had 23 points and 18 rebounds for her 29th double-double this season. The consensus national player of the year led the Gamecocks to the national championship game a year after a heartbreaking one-point loss in the semifinals.

South Carolina advances to its second NCAA title game. In their only other appearance, the Gamecocks won the 2017 NCAA title.

South Carolina, the wire-to-wire No. 1-ranked team this season, notched its fourth victory over an AP Top-5 opponent this season. The Gamecocks improved to 34-2, matching their single-season record for wins in a season.

Destanni Henderson comes up big as she knocks down another corner 3-pointer for South Carolina.

South Carolina responded every time Louisville made a run. What were the big adjustments the Gamecocks made to beat the Cardinals?

Creme: Boston. Whenever South Carolina needs something big, it’s always Boston. The Gamecocks were in complete control with a 15-point lead in the third quarter, then got loose with the ball. The guards committed four turnovers and there were a couple of missed layups. Louisville got within six and suddenly it was a game again. Then Boston did her thing. In a 30-second stretch that bled into the fourth quarter, Boston scored five points and grabbed four offensive rebounds. She took over the paint and the backboards and the ballooned back to 11. Louisville never threatened again.

Hailey Van Lith scored 20 points in all four of Louisville’s NCAA tournament games heading into the Final Four, but never got going Friday, with just two points in the first half. How did South Carolina disrupt her?

Barnes: Brea Beal got on Hailey Van Lith early, disrupting everything the Louisville sophomore tried to do. Beal, a 6-foot-1 junior guard, blocked two of Van Lith’s early shot attempts, turning those into scoring opportunities for South Carolina. Beal is a stellar defender, but her size and length also forced a smaller Van Lith to make more adjustments to get around her. And as a smaller guard — Van Lith is listed at 5-foot-7 — South Carolina’s size in the lane and Beal’s on the perimeter simply stifled all levels of her game. Van Lith couldn’t really get into the paint; she couldn’t get a pull-up jumper going; and she attempted three 3-point shots all game (all coming late in the fourth quarter). Van Lith competed hard until she was pulled from the game, but South Carolina successfully frustrated her early and she never recovered.

What was the difference-making stat?

Philippou: Neither of these teams likes to take 3-pointers like, say, Creighton does, but Louisville hitting just one trey — and attempting only eight shots from behind the arc the entire game, including three in the final minute! — while South Carolina had made five by midway through the third quarter was a difference-maker.

Check your bracket now that the Final Four of the women’s NCAA tournament is set. Play Tournament Challenge

Entering the game, Louisville averaged six made 3-pointers on 17 attempts from deep per game; the fact that they attempted just five 3s going into the final minute is a testament to how uncomfortable South Carolina’s defense made them. The Gamecocks 35% clip from 3 isn’t super impressive, but guards Destanni Henderson and Zia Cooke started 5-for-10 from the arc, which opened up the game. If the Gamecocks can hit timely 3s Sunday like they did Friday, they’ll be well positioned to cut down the nets.

Also, it should be noted that Beal (12 points, 5-for-7 shooting) was productive not just defensively, but offensively, taking advantage of open shots granted to her by Louisville’s defense that was too preoccupied with Boston. Beal has now finished with back-to-back games in double figures for the first time this season.

What’s one thing South Carolina must do even better in Sunday’s championship game?

Barnes: South Carolina did pretty much everything well on Friday night. The one area where the Gamecocks could stand to improve is taking care of the basketball. South Carolina averages 14.4 turnovers per game and the Gamecocks were above average against Louisville with 15 turnovers. The Cardinals converted those extra possessions into 13 points on the other end. In addition to the turnovers, there were stretches when the guards just looked careless with the ball — throwing skip passes that hung in the air or trying to thread one too many needles. Not all of those decisions resulted in turnovers, but on Sunday, that might not be the case.