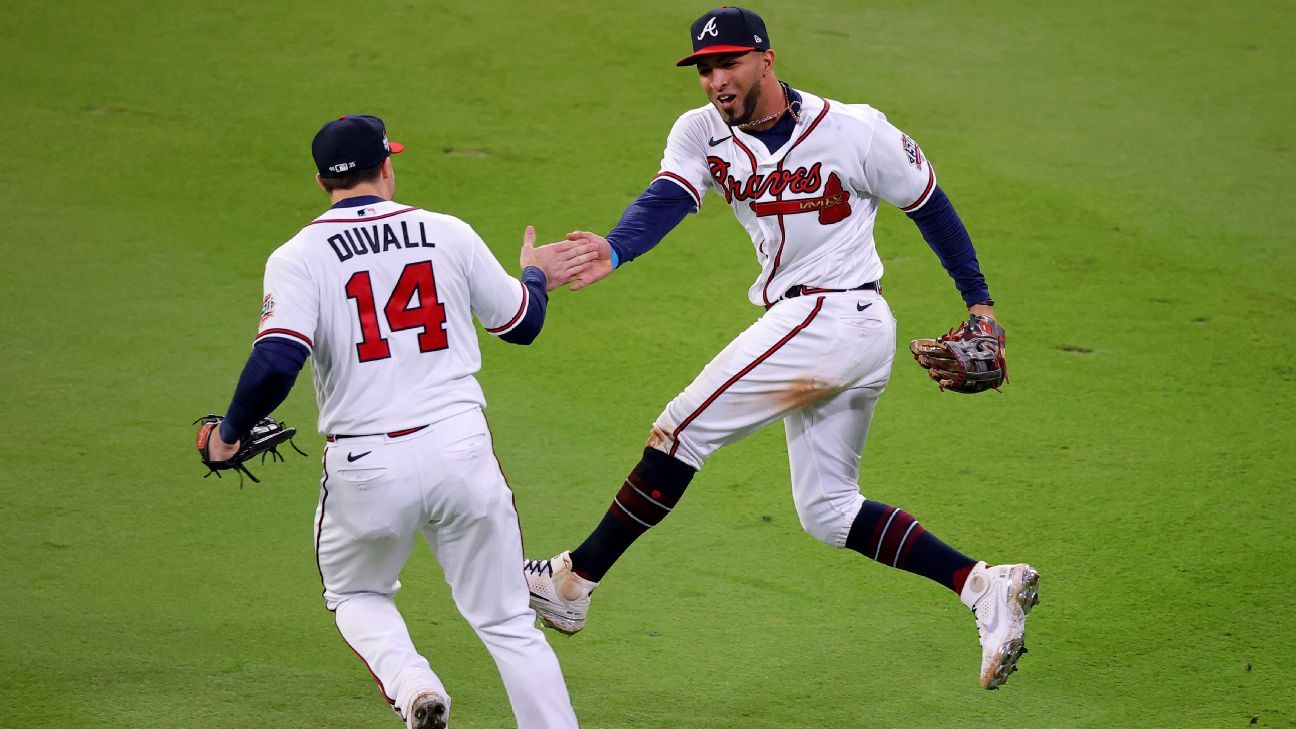 ATLANTA — At this moment in time, no human being on the planet has more self-esteem than Braves left fielder Eddie Rosario, who is easing into the role of postseason star like it’s gradually taking on the shape of his body. Rosario sat back casually at the podium after the Braves’ Game 4 win over the Astros — one that put them one win from a World Series title — with an easy smile, ready to unleash the charisma.

He wore a sweatshirt depicting a massive blue-green eyeball with flecks of brightly colored lashes and charmed in two languages. At one point he responded to a question by saying, “I feel right now I’m Super Rosario.” The answer was kind of relevant to the question he was asked, and kind of not, and that was the best part about it. The game was still inside him, and his enthusiasm for his own handiwork hadn’t quite found the proper outlet.

Rosario had two hits Saturday night, but nobody wanted to talk about them. He scored the Braves’ first run, at a time when it appeared the offense was going to take the entire night off, and nobody cared.

The game followed the same path as the three that came before – not much happening over an unfathomable amount of time – until a lot happened in a big hurry. The wildest and most unexpected event of the night came in the bottom of the eighth inning, when Rosario made what might have been a game-saving catch on a two-out drive by Jose Altuve. The catch was remarkable for a number of reasons, the biggest being how downright lucky it was.

But a lot happened in left field at Truist Park in Game 4, and Rosario’s catch was only half of the story. Yordan Alvarez, who serves as the Astros’ left fielder for a maximum of three games per year, attracted attention for failing to make a catch that was ridiculously difficult but still possible. After Braves shortstop Dansby Swanson hit a solo homer in the seventh to tie the game at two, pinch-hitter Jorge Soler followed with a 107-mph warhead that hung in the air for 3.8 seconds, long enough for Alvarez to travel 59 feet – at a clip of 22.9 feet per second, for those counting – and get within a glovestring of a catch that would have preserved the tie. Alvarez threw his arm above the wall a split-second after the ball had passed, and then he hung over the wall by his left underarm just long enough to make it seem possible he might stick there.

When he returned to the ground, he stayed there. The crowd spontaneously combusted in outright delirium, Soler raised a fist as he floated around the bases, and it seemed as if Alvarez’s immobility was merely frustration. Shortstop Carlos Correa, the closest Astro to Alvarez, immediately ran toward his teammate, along with the Astros trainer.

“I was very worried, very worried,” Astros shortstop Carlos Correa said. “When I saw him, I made sure to get out to him and translate for him and thank God he’s fine.”

It’s weirdly symbolic that Alvarez, a DH forced to play the outfield in order for the Astros to get his bat in the lineup for the games in a National League park, played such a pivotal role in the outcome. Given the rule changes that are expected to be enacted during the offseason, he is probably the last of his kind: the reluctant non-outfielder forced to do his best and live with the consequences in the only sport that changes the rules of its signature event based on the location. Nobody will mistake Alvarez for a good, or even average, big league outfielder. He’s wildly unsure of himself out there, and he treats nearly every fly ball hit his way as if he’s just emerged from a dark room to face the bright sun. But it’s also true — considering its 70 percent catch probability — that Alvarez is only one of a group of bona fide big league outfielders, some no doubt on his own team, who would not have made that catch. Correa termed the play “impossible” and said, “It was a rocket. I mean, he had to time it perfectly, and even then he might have broken a rib trying to make that catch. For me, it’s an impossible play to make. I mean, Rosario’s play was very impressive, but that ball stayed in the ballpark. This one was out.”

Rosario’s catch deprived Altuve of at least a double, and he would have been the tying run, in scoring position, for a last-ditch effort by the Astros. As soon as he hit it, Altuve gave off the impression that he believed for all the world that he had tied the game, and, in 26 other big league ballparks — including Minute Maid Park — he would have been right.

Dansby Swanson and Jorge Soler hit back-to-back home runs to push the Braves ahead of the Astros.

Altuve’s fly ball hung in the air 4.2 seconds, a full 0.6 seconds longer than Soler’s, but Rosario was playing shallower than Alvarez and had farther to run. He took off right away, turning his back to the plate and running blind to the spot he predicted the ball would be. He got to the warning track and twisted his body so that his back faced second base. It was odd and slightly awkward, and he stabbed his glove up toward the wall at the last possible second — purely an educated guess.

He was right, it turned out, even if just barely. The ball found itself in the webbing of his glove, and Rosario looked as surprised as anyone in the ballpark. Rosario ran back to the dugout, his exquisitely landscaped facial hair framing the world’s happiest face while his teammates ran toward him as if he’d stepped out of the gospels.

“It just happened,” Rosario said. “That was it. I think anyone in that position is just trying to make the play, and that’s all I was doing. When the ball was hit, I was just charging as hard as I could, and I was running. So at the last second, I threw my glove at it, and I was able to catch it.”

Braves manager Brian Snitker is a man of fundamentals and Playing The Game The Right Way who no doubt pines for the days of the two-handed catch. “I’m not even going to look at that again,” he said of Rosario’s catch. “That’s probably not an instructional video we’re going to show.”

There was a hint of admiration in there, struggling to find its way out. Rosario’s teammates, not surprisingly, were far more effusive in both their praise and their use of their descriptive powers.

“I was in the corner there with a group of guys, and we were watching the play,” Soler said. “When Eddie turned to look at the fence, we thought to ourselves — or at least I thought — that ball either hit the fence, or it’s gone. Then he just kept running and threw the glove out there and made the catch, and we all looked at each other in amazement, like, ‘Did that really just happen?’ It took us all by surprise, and it was something truly out of a movie.”

One night, one field, two vastly different movies. Angels — and devils — in the outfield.