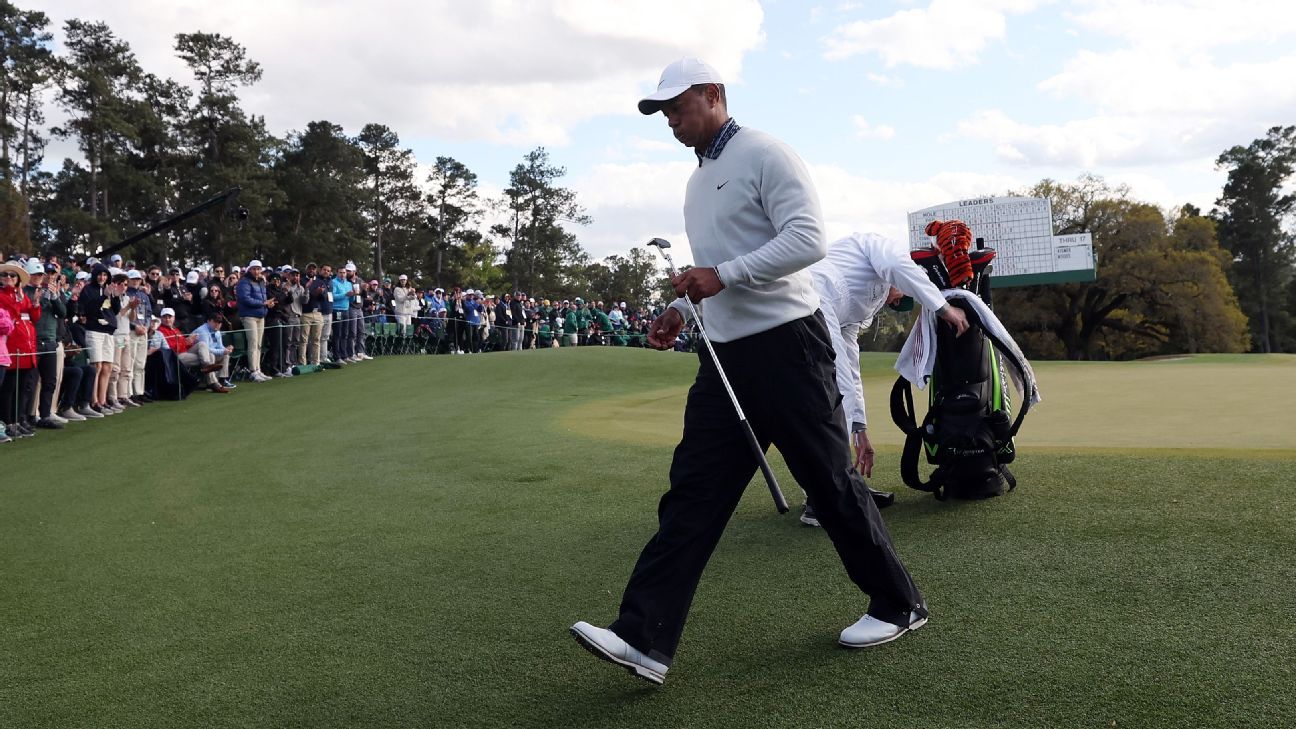 AUGUSTA, Ga. — The flurry of security elements moving into place let the few people hanging around the backside of the clubhouse know Tiger Woods was coming out to the parking lot. His caddie, Joe LaCava, had already dropped Woods’ clubs in his car and headed away on a golf cart. The few people milling around bundled against the chill. Then Woods stepped outside and walked with a pronounced limp toward his car. He looked in pain, and the idea that he’d been somehow willing himself to not limp in front of the cameras made his long, brutal Saturday feel more poignant. Stripped of his mask, he wore heavy the last 14 months, and especially the last two days.

Woods shot 78. The round looked as bad as the number sounds. He grimaced more than he’d done before. Howling winds blew around the course, the temperature steadily dropping, which is the worst possible weather for his reconstructed and aching leg. He cracked a joke about it earlier in the week — “I think anyone who’s in this room who’s older than me can probably attest to that” — but it didn’t look funny in the setting sun, headed to spend the next few hours hoping his team can find enough duct tape and wire to get him back to the first tee on Sunday.

If that sounds bleak, it’s because it felt that way a little. The energy bled out of the course as people realized he didn’t have a championship run in him. Not this year. He 4-putted a hole. He 3-putted four more. He struggled to bend over to read the greens. Even so, there were flashes of what used to be and what might be again, when he has more time to get stronger and to heal. Standing on the 12th tee, looking up and trying to figure the wind swirling in Amen Corner, he did the math in his head. He talked to LaCava, who held a 9-iron. The wind changed.

“Nine or wait it out?” LaCava asked.

Tiger took the club and aimed. He stuck it on the green and rolled in his birdie putt. He birdied No. 13, too, before making bogey on both 16 and 17. A crowd gathered around the final tee. The mood of the gallery was not the frenzy of a Sunday charge, or the usual jockeying for a better view. People seemed to be grateful, if that makes sense, for his recovery maybe, or more likely for the effort it took to make it this far, to the 54th hole of the Masters.

Woods hit a good drive short of the two bunkers on the left side of the fairway. He twirled the club and walked after the shot. To his right, at the 10th green, a huge roar came up from the gallery, cheering for someone else. It wasn’t his tournament to win any longer, the roars waiting now for the rest of the field. He kept walking and another roar echoed from somewhere behind him. The future of golf was rolling on this Saturday, the leaders all popular with people who love golf, who gather around card tables and throw money at Calcuttas, but the only golf legend in the world wanted to just finish this march.

Woods hit his second shot into the gallery, made a bad chip and then 3-putted to finally end the day. Walking off the green, he exhaled hard.

“It’s just like I hit a thousand putts out there on the greens today,” he said after he got inside. “I just could not get a feel for getting comfortable with the ball. Posture, feel, my right hand, my release, I just couldn’t find it.”

Only 18 more holes remained for him to finish one of the gutsiest tournaments of his career, even if he was playing for a kind of moral victory. He got asked about what he hoped the people watching at home would take from his stubborn insistence on playing.

“Never give up,” he said. “Always chase after your dreams.”

It’s strange to think about Tiger Woods as a guy with dreams. Goals, sure, like hitting metrics in the gym, or having his range of motion get better by tiny degrees. A dream is a childlike thing, full of wonder and imagination. He’s a private guy and his dreams remain his own. But for the people wondering why he’d even try to play this week, there might be an answer in that word. The past three days, and Sunday, are just the beginning of something he sees for himself. Tiger Woods will not win the 2022 Masters, but he will leave this place a victor.