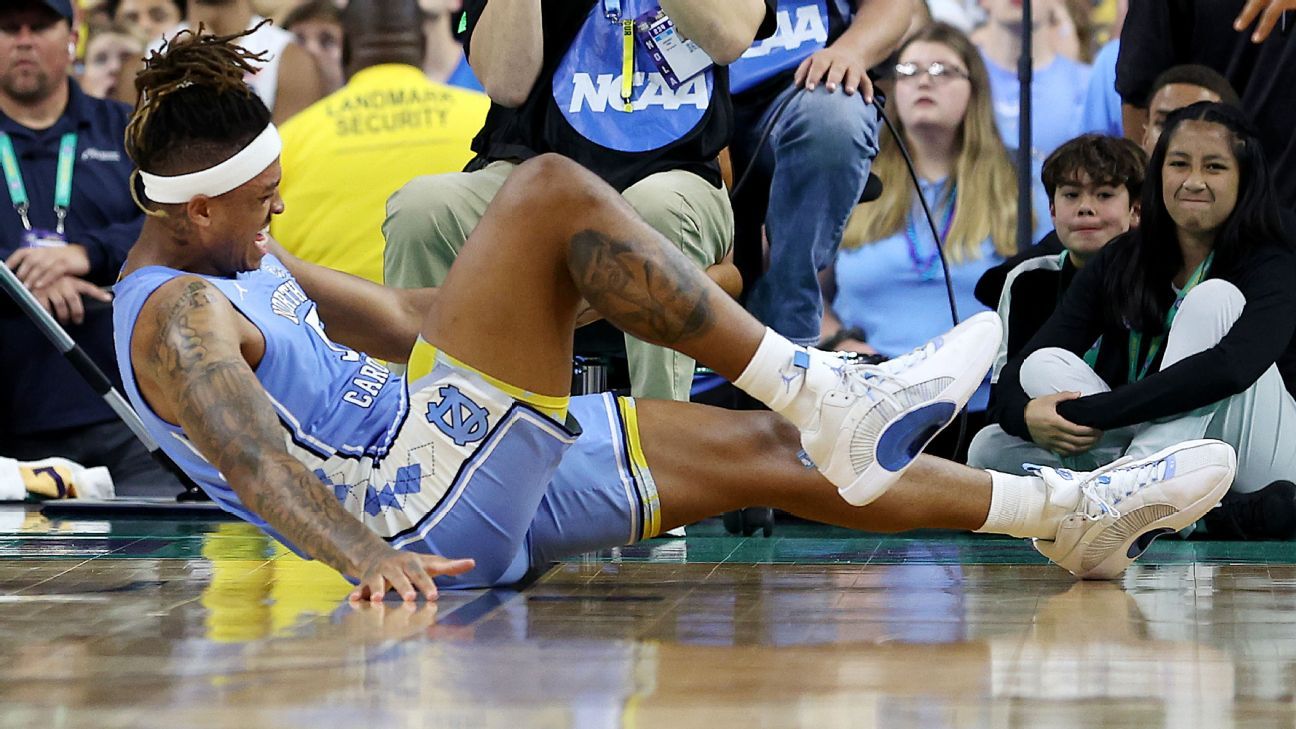 NEW ORLEANS — A few minutes before midnight in the loading area outside the Caesars Superdome, the police motorcycles roared their engines to life. The flashing lights highlighted the front seats of the North Carolina men’s basketball team bus, which illuminated the emotion of a strange night.

UNC star big man Armando Bacot sat in the first seat behind the charter bus driver, his hobbled right ankle in a boot. UNC coach Hubert Davis stared ahead in silence, chomping on his gum and rubbing his forehead in seeming disbelief.

UNC had just squandered a 16-point lead in the NCAA championship game, falling to Kansas 72-69 amid a spiral of cascading calamities for the biggest blown lead in tournament final history. Along the way to ignominy, four different Tar Heels suffered some type of malady on a night that the team essentially played six players.

While UNC players didn’t use the injuries as an excuse, the collective toll clearly dragged them down in a second-half spiral that prevented No. 8-seed UNC from completing a historic run for the school’s seventh national title. Part snakebit, part physically overmatched and definitively outplayed by a better team, UNC’s first half of searing optimism disappeared in a bizarre second half that will long haunt the fan base.

Consider that throughout the course of the game, star forward Brady Manek took a WWE-level elbow to the head, dynamo guard Caleb Love twisted his ankle while working away from the ball and Puff Johnson interrupted the game of his life by bowing over to vomit on the floor. (While KenPom doesn’t record such acts, it’s likely to be remembered as the first on-floor vomit in NCAA championship history.)

The fourth and most important injury happened to a player who valiantly battled pain all night. In the final minute, Bacot tumbled to the floor on the game’s biggest possession, resulting in a turnover.

With North Carolina trailing 70-69 and 50 seconds remaining, Bacot attempted a spin move in the lane and his injured right ankle gave out on what replays suggested was a floorboard depressing slightly under the weight of his foot. (Cue the conspiracy theories.)

Armando Bacot injured his ankle on a loose floorboard.

A LOOSE FLOORBOARD AT THE NATIONAL CHAMPIONSHIP GAME. pic.twitter.com/Ion0BCqly6

Bacot turned the ball over, yet somehow gathered himself to get up and hop the length of the court on one leg to attempt to help UNC out on defense. If there’s any image that summed up UNC’s agony Monday night, it was their 6-foot-10 warrior big man pogo sticking himself down the floor to attempt to play one last defensive possession. (The officials, mercifully, stopped the play and he subbed out.)

“I thought I made a good move,” Bacot said. “I thought I really got the angle I wanted. I thought it would have been an easy basket. And then I just rolled my ankle…

“I really struggled. I really couldn’t put any weight down on my right leg. And I don’t know, right then and there I probably knew I was done at that point.”

North Carolina’s Armando Bacot has to leave the game after rolling his ankle in the final minute against Kansas.

After all those unfortunate events, UNC still had a chance to tie the game in the final few seconds after Kansas guard Dajuan Harris Jr. attempted to Chris Webber his way into NCAA infamy by stepping out of bounds with 4.3 seconds left. Fittingly, the game’s final play got undone by — what else? — a UNC player falling over.

Davis ran a play for Manek to get a 3-pointer on the opposite side, with R.J. Davis attempting a wide-elbowed screen on Ochai Agbaji to free up Manek. But Manek fell, with his right ankle seemingly getting caught at an awkward angle as he planted to sprint across the lane and get open.

Caleb Love’s game-tying attempt is off the mark for North Carolina as Kansas clinches its fourth national title.

“Looked like he was going to be open, throw it to the opposite corner,” Davis said. “But he stumbled. And so it threw the play totally off. I think he would have been open.

“The first option was for him to shoot the 3. And then we had Caleb coming off of another screen on the back side that was going to be set by Justin McKoy. But because Brady tripped, it just messed up the play.”

The busted play ended in a Love low-percentage step-back 3-pointer, closely guarded by Kansas’ Christian Braun. That shot came nowhere close to going in, and Kansas celebrated in the aftermath. “Got the ball and I took the shot and came up short,” Love said.

After bursting ahead by 16 in the first half and leading by 15 at halftime, UNC just couldn’t muster the energy to hold off Kansas in the second half. A flurry of turnovers, Remy Martin’s shot-making and David McCormack ‘s brawn undid UNC amid the theatre of bizarre that coincided.

Johnson’s on-court spit-up came, he said, after getting hit in the belly. “Just didn’t go well once I got hit in the stomach,” he said, as he fell to the floor and prompted the NCAA’s towel boy to earn his seat with a vigorous wipe-up.

Johnson’s 11 points in 18 minutes set the stage for him to emerge as an obscure title-game hero, at least until he missed a pull-up 3-pointer with six seconds left that was a candidate for worst UNC shot attempt of the night.

Love’s ankle injury happened with no contact or any type of dramatic cut, as he said he “rolled my ankle twice” on the second-half play. Love finished 5-for-24, including 4-for-18 in the second half and 1-for-8 overall from 3-point range.

The final indelible image in the stadium came with Bacot needing help walking down the stairs that led to the postgame podium, with Davis directing UNC staff to help him descend from the stage area.

“We all really wanted to win,” Bacot said. “We came this far and this was a huge goal for us was to just hang up a banner. And we just really wanted to win. I really wouldn’t let anything stop us from getting to that point. It didn’t go the way we wanted.”

As UNC players trudged out of the arena, there was some solace in the fact that they spent six weeks significantly altering the trajectory of the program in Davis’ first year. “I should be disappointed, but I’m just filled with so much pride,” Davis said. “I’m so proud of these guys, of what they have done for themselves individually, as a team, the way that they have represented our university, this program, our community.”

Brady Manek, Armando Bacot and R.J. Davis help UNC go on a 16-0 run to build a big lead over Kansas.

UNC stormed through five games and toppled arch-nemesis Duke in the semifinals here, nearly becoming the first No. 8 seed since Villanova in 1985 to win the title. Instead, UNC settles for its record 21st Final Four, ending the career of Mike Krzyzewski and a surge of optimism to accompany Davis’ tenure going forward.

“I think a lot of people have seen the passion Hubert has for coaching, for these kids and for the university, and the authenticity that he brings to it every day,” UNC athletic director Bubba Cunningham said. “We have seen it. Now a lot more people do.”

Davis mentioned this weekend how he annually watched UNC’s 1991 Final Four loss to Kansas for nearly two decades, an exercise in torture in which he hoped the ending from back in his playing days would somehow change.

After Monday night, there’s a new entry to the horror film section of the UNC basketball historic film catalog. This charmed run to the final will be long remembered for the twists — ankles and otherwise — that led to a macabre ending.