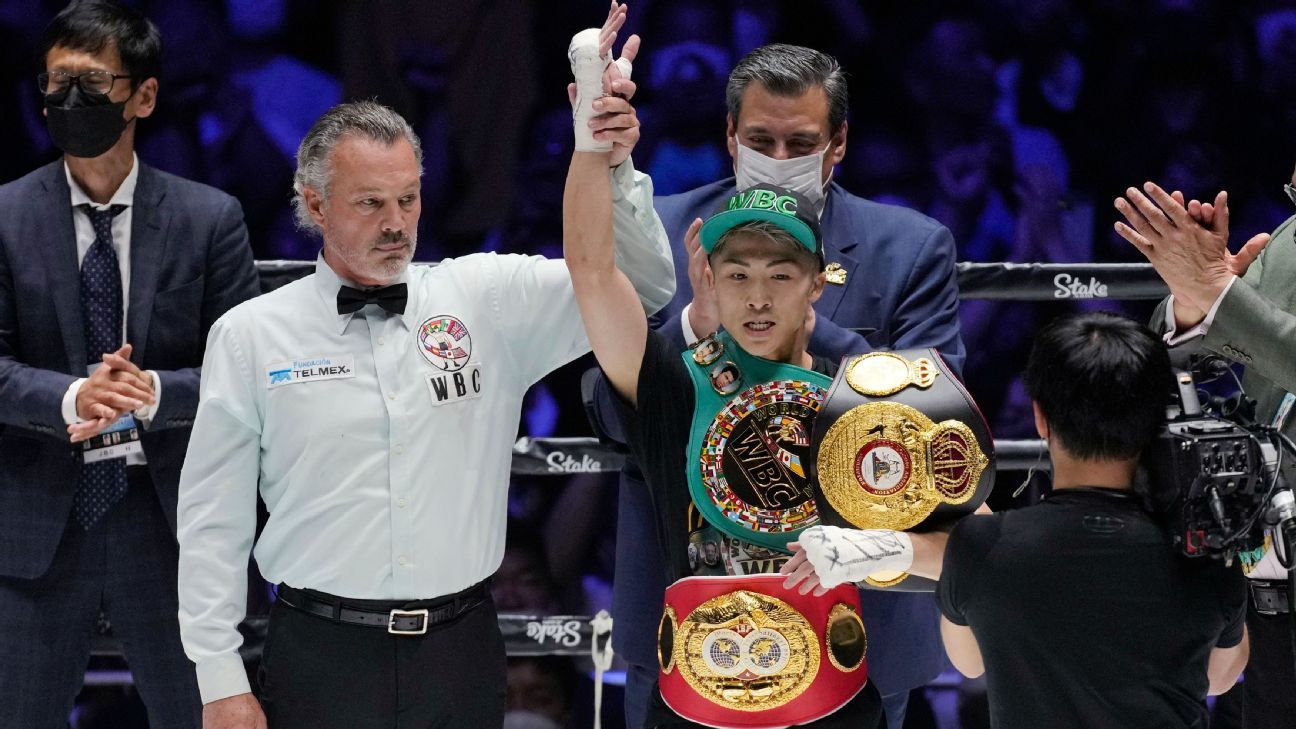 When he met Nonito Donaire in November 2019, Inoue was genuinely tested for the first time in ESPN’s Fight of the Year. He defeated Donaire (42-7, 28 KOs) via unanimous decision on that night.

But 31 months later, Inoue made easy work of the future Hall of Famer with a second-round TKO in their bantamweight title unification bout Tuesday in Saitama, Japan.

Inoue (23-0, 20 KOs) floored Donaire with a sharp right hand in the closing seconds of Round 1, and then dropped him again in Round 2.

A left hook from Inoue wobbled Donaire in the second round, before the Japanese star trapped him in the corner and landed a jab, followed by a right hand and left hook that scored a second knockdown.

With the victory, Inoue added a third 118-pound title and cemented himself as ESPN’s No. 2 pound-for-pound boxer (if not No. 1).

“In the very first round, I received a left hook from Nonito, and that punch made me wake up and stay focused,” Inoue, 29, said in Japanese remarks translated to English. ” … To be able to reach my status up at the top I need to win this fight so I just decided … to finish this fight at this moment.”

The quick finish was in stark contrast to the first fight between Inoue and Donaire in the World Boxing Super Series finals. Inoue, a three-division champion, suffered a fractured right orbital along with a broken nose in the early rounds of that matchup.

In between their meetings, Inoue fought three times and Donaire fought twice, but it was “The Filipino Flash” who faced the stiffer competition.

Donaire scored a fourth-round knockout of Nordine Oubaali to become a three-time bantamweight champion and retained the title with a fourth-round KO of Reymart Gaballo in December.

Inoue, meanwhile, defended his unified championship three times, with wins inside the distance vs. Jason Moloney, Michael Dasmarinas, and in December, a TKO-8 victory over Aran Dipaen.

And when he finally stepped in the ring with Donaire a second time, it felt like a continuation of the first fight. After 12 rounds against each other, there was no feeling-out opening round as they traded big shots in the center of the ring, but this time, Inoue was even sharper.

Donaire entered the ring rated No. 2 by ESPN at 118 pounds, but he provided little resistance vs. Inoue, who also won titles at 108 and 115.

“My goal is to be the undisputed champion,” said Inoue, ESPN’s No. 1 bantamweight. “If I can do that within the year of 2022, I would love to stay in this division. But if I can’t, I’m capable of raising my division [to 122 pounds].”

A win over England’s Paul Butler, who owns the fourth title at 118 pounds, would accomplish the feat for Inoue. At 122 pounds, matchups with unified champions Stephen Fulton and Murodjon Akhmadaliev await.

Donaire, on the other hand, could always walk away from the sport. He turns 40 in November and his legacy is secured. Donaire won his first titles in 2007 when he scored a highlight-reel KO of unified 112-pound champion Vic Darchinyan. Donaire went on to win titles at 118 pounds and 122.

He even competed at 126 pounds, but after a featherweight loss to Carl Frampton in 2018, Donaire shockingly returned to 118 pounds and regained a title.

But now, his rivalry with Inoue is concluded, and maybe even his career. Donaire remains the only boxer to truly test Inoue, who is peerless at 118 pounds and perhaps beyond.