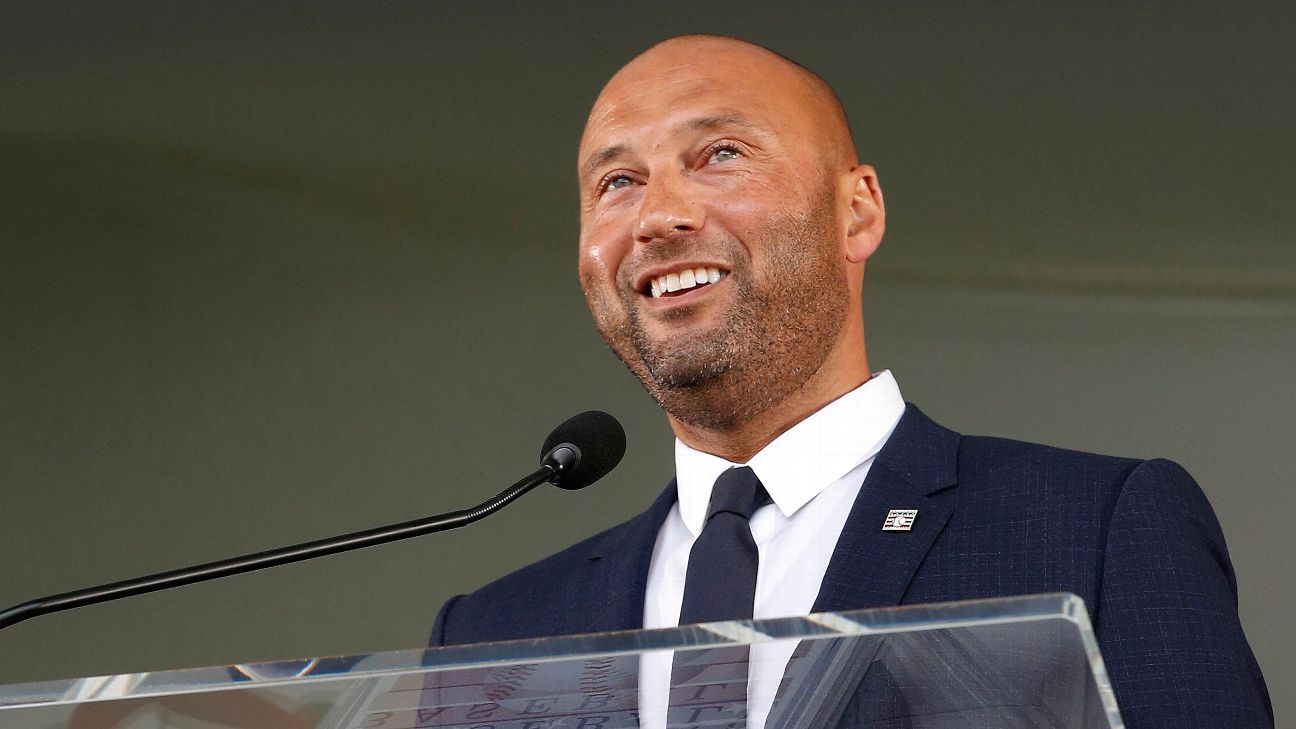 COOPERSTOWN, N.Y. — On an induction day that seemed for months would never come, New York Yankees great Derek Jeter went into the Hall of Fame on Wednesday with three others in front of a crowd dominated by Yankee colors, logos and Jeter’s signature uniform No. 2.

“It’s been a hell of a ride,” Jeter said, closing out a long-overdue afternoon of speeches and remembrance.

Larry Walker, Ted Simmons and late labor pioneer Marvin Miller were honored alongside Jeter, and the career of each provided poignant moments during baseball’s first induction ceremony since July 21, 2019. The 2020 ceremony was canceled because of the COVID-19 pandemic, and the 2021 ceremony, after initially being slated to be a television-only event, was postponed so that fans would be in attendance.

Most of those fans turned out for Jeter, the celebrated captain of the Yankees who led baseball’s most storied franchise to seven pennants and five World Series titles during a 20-year career in which he had 3,465 hits, the sixth-highest total in big league history.

After waiting out his standing ovation and the familiar “DER-EK JE-TER” chants from New York fans spread out along the lawn behind the Clark Sports Complex, Jeter began by thanking his family, saying that his father “was my first idol” and recounting how as a child he would show his early love for the Yankees by playing whiffle ball in the backyard in full pinstripes while imitating former Yankee Dave Winfield.

Winfield, now a Hall of Famer, was sitting on stage behind Jeter.

“When everyone asks about nerves, they assume it’s because of a speech, what I may say or not say, how many people are in attendance,” Jeter said. “No, no, no. The nerves are because of these people that are behind me now, and all those who are part of the Hall of Fame family. Because the great thing about baseball is its history. That’s what makes it so special.”

Jeter, who has long said that the only thing he ever wanted to do in baseball was to play shortstop for the New York Yankees, said that doing so was “one of the greatest honors of my life.”

He added his goal as a Yankee was to “win more than everybody else — and we did.”

Jeter also poked some fun at the lone unknown sportswriter who did not vote for him in the BBWAA balloting that made him a near-unanimous selection back in January 2020.

“Thanks to the writers,” Jeter said. “All but one of them.”

The ceremony began with a bittersweet video presentation marking the lives of the 10 Hall of Famers who died during the 26 months since the last induction day. The video was narrated by Hall of Fame catcher Johnny Bench, who was unable to attend after testing positive for COVID-19.

Thirty-one Hall of Famers made the trip to Cooperstown to watch the Hall’s membership grow to 333. No one was elected during the BBWAA round of voting in 2021, and the era committees were unable to meet because of the pandemic. So the Class of 2020 had the 2021 induction all to themselves.

Walker gave the most light-hearted speech, recalling the time early in his minor league career when he ran across the diamond without re-touching second base on a fly ball because he didn’t know the rules.

That’s because Walker was born in Canada and grew up playing hockey. He became the second Canadian-born Hall of Famer, joining pitcher Fergie Jenkins, who was in attendance and was recognized by Walker during his speech.

“I honestly see myself as an average guy,” Walker said. “And I’m good with average. I’ve lived my life to never get too high, and never to get too low. But to stand on this stage right now and to tell you I’m feeling average would be a complete lie. My feet have not touched the ground all day.”

Walker hit .313 with 383 career homers over a 17-year career and won the 1997 NL MVP award while playing for the Colorado Rockies. He becomes the first Rockies player to go into the Hall with the team’s cap emblazoned on his plaque.

Simmons was selected by an era committee during the 2019 winter meetings. The eight-time All-Star catcher retired after the 1988 season before going on to a long post-playing career as a scout and executive.

“My path was long,” Simmons said. “But I wouldn’t change a thing.”

Simmons said that if he could have chosen one person to go into Cooperstown with, it would have been Miller, the legendary head of the Major League Baseball Players Association. Miller died in 2012.

Speaking on behalf of Miller was his successor as the head of the MLBPA, Donald Fehr, who explained the importance of Miller’s place in the game. Alas, Fehr might have been a little too detailed in his explanation, as the crowd began to grow restless as his speech went on.

Much of that was because of whom most of the crowd was there to see. At one point, Jeter recalled how during his career, his father frequently reminded him to, “Keep building that resume.”

After Wednesday, and the long wait for it come, the resume is now complete for Jeter and the rest of baseball’s newest immortals.