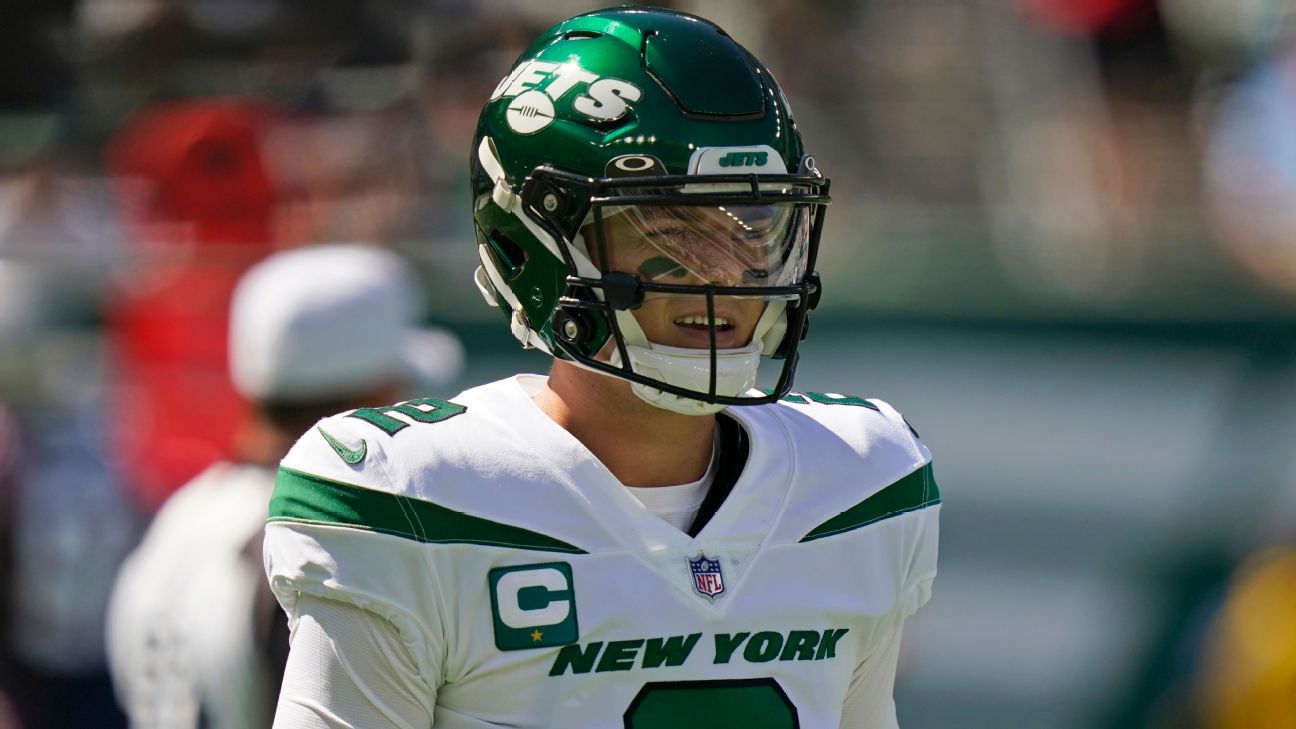 EAST RUTHERFORD, N.J. — Facing the New England Patriots for the first time, New York Jets quarterback Zach Wilson received his “welcome-to-the-rivalry” moment on his first pass. And his second. And two more times after that.

The rookie was intercepted four times in his first 10 pass attempts in a 25-6 loss Sunday at MetLife Stadium, an all-time clunker in which he learned a hard lesson about being overly aggressive.

“It’s OK to play a boring game of football. That’s really it,” coach Robert Saleh said after dropping to 0-2. “He’s an electric dude. He’s competitive as crap and he wants to win so bad, but sometimes it’s OK to be boring. That’s probably the biggest lesson he can take out of this one.”

Wilson, drafted No. 2 overall, threw more interceptions in the first 34 minutes of the game than he did his entire 2020 season at BYU. The common theme: He forced passes downfield when it would’ve been wiser to take the safer, checkdown option.

“This is what we signed up for, right?” Wilson said. “There’s going to be games like this — the ups and downs.

By halftime, Wilson had completed as many balls to the Patriots (three) as he did to his own team. It was one of those days that had statisticians unearthing some crazy factoids:

• Wilson became the third rookie in the past 40 years to have four interceptions in his first 10 attempts, according to the Elias Sports Bureau. The previous two were the Chicago Bears’ Kyle Orton (2005) and the Buffalo Bills’ Nathan Peterman (2017).

• Wilson joined Mark Sanchez and Sam Darnold as the only rookies in Jets history to throw four interceptions in a game. Sanchez actually did it twice in 2009, including a five-interception debacle.

• Wilson became the first Jets player in 40 years to throw interceptions on his first two passes. The last to do it in any game was the Seattle Seahawks’ Tarvaris Jackson in 2011.

• Wilson was the first Jets quarterback to throw three interceptions in the first half of a game since Geno Smith in 2014. That’s a rare occurrence in the NFL. Since the start of the 2020 season, only one other quarterback has done it — Kirk Cousins of the Minnesota Vikings.

• Wilson became only the fourth rookie top-five pick to have four interceptions and no touchdown passes in a game in the past 20 years. The previous two were Jets — Darnold and Sanchez. Alex Smith did it in 2005 as a member of the San Francisco 49ers.

“It wasn’t like he was overwhelmed,” Saleh said of Wilson. “There’s some fundamental things that he has to understand with regard to taking care of the ball and basic stuff.”

Things got so bad that the crowd was booing early in the fourth quarter. Wilson took it in stride, saying the fans “should be booing” when the team plays that poorly.

Saleh said he never considering pulling Wilson. He doesn’t have a veteran option on the bench, as the backup — Mike White — has no regular-season experience.

Wilson’s first interception was a bad throw into single coverage, intended for wide receiver Corey Davis over the middle. It was caught on a deflection by cornerback J.C. Jackson. Linebacker Ja’Whaun Bentley came free on a delayed blitz, but Wilson said that didn’t disrupt his timing.

“I probably just shouldn’t have thrown it,” he said. “That’s really what it comes down to.”

On the second interception, Wilson was rolling out and forced a pass to Davis on the sideline. Rookie Elijah Moore was open underneath. The ball was high but catchable. It went off Davis’ hands, and safety Adrian Phillips made a diving pick. “I should’ve had that,” Davis said.

The third interception was an underthrow to Moore. Once again, Wilson was victimized by Jackson. The fourth interception was a deep floater, not even close to a target — an easy play for safety Devin McCourty. Wilson hinted that a receiver might have run the wrong route, saying there was “a little confusion” on the play.

Wilson wasn’t the first Jets quarterback to get devoured by a Bill Belichick-coached defense, but he insisted the Patriots didn’t do anything to confuse him. He said they simply executed well in man-to-man coverage.

“I think no matter if it’s a rookie quarterback, if you can create pressure and get to the quarterback and not allow him to go through his reads, and do the normal things, that’s tough to do,” McCourty said.

What made Wilson’s performance disconcerting is that his pass protection was solid and he was supported by a running game (152 yards). Still, he wasn’t able to get the ball to his playmakers. Davis, who had two touchdowns in Week 1, was held to two catches for 8 yards.

“I just have to tell myself, ‘Hey, I can’t be gun-shy,'” he said. “I have to sling it around and I still have to be aggressive down the field, especially when we’re down. And I have to take care of the ball.”

“It feels good. Obviously it’s hard to win in the NFL. We’ll get better,” Jones said. “I think everybody, including anyone who watched the game, could agree that the offense can play better. And we will. The defense did a great job creating the turnovers.”

Jones also found a way to contribute in other areas, hustling down the field and helping push running back Damien Harris over the goal line on his 26-yard touchdown run in the third quarter, and later chopping down a defender on a 16-yard run by receiver Kendrick Bourne.

Jones also shared the words of advice he gave to Wilson after the game.

“I think Zach’s a really good player. As a rookie quarterback, this is what I told him after the game: We just have to continue to get better. It’s just part of the game,” he said. “Our defense is really good, so it’s a tough defense to go against. I’ve gone against them in practice, and probably thrown a lot of picks too. So it sucks. Zach is going to be a great player and he’s a really hard worker. He kept his head up. We just had some brief words there. He’s definitely going to continue to grow, just like I will too.”