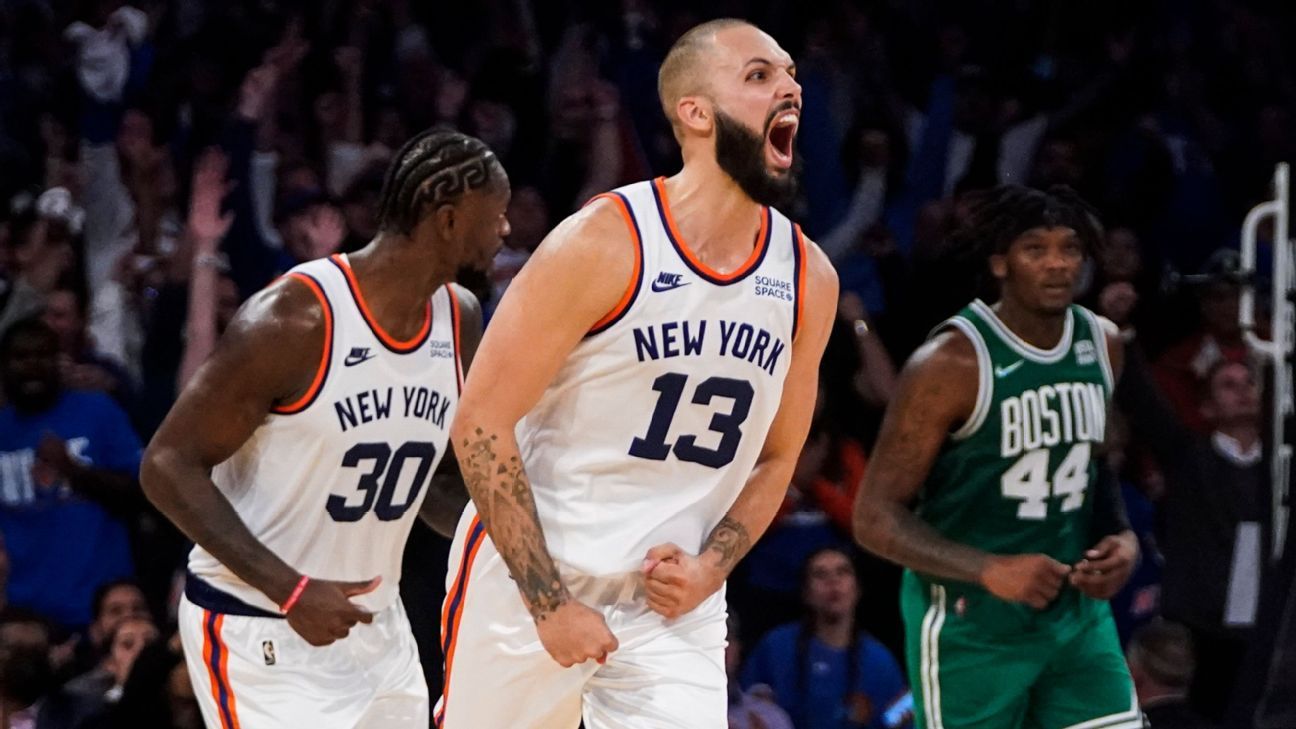 NEW YORK — When the Knicks took a four-point lead with nine seconds to go in Wednesday night’s season opener against the Boston Celtics at Madison Square Garden, it appeared the home team was on the verge of a feel-good win to start Kemba Walker‘s Knicks career.

It turned out the Knicks were, in fact, going to win the game — it just wasn’t in the way anyone could have envisioned.

After an insane final nine seconds of regulation that saw the Celtics hit two 3-pointers in the final five seconds to tie the score, plus a pair of frenetic overtimes, New York eventually emerged with a 138-134 victory, snatching a win from the jaws of what would’ve been an excruciating season-opening defeat.

“The good thing, at the end of the day is we got the win,” Knicks coach Tom Thibodeau said.

Getting it, though, took a lot more work for New York than it initially appeared.

The trouble started after the other former Celtic starting in the Knicks’ backcourt, Evan Fournier, got free for a layup to push New York’s lead to 114-110 with nine seconds to go, sending the partisan fans inside MSG into a celebratory frenzy in anticipation of a win.

But then Jaylen Brown, who finished with 46 points, buried a 28-foot 3-pointer to pull the Celtics to within a point. After Julius Randle hit a pair of free throws to push the Knicks’ lead back to 116-113 with 4.9 seconds to go — and with Boston not having any timeouts — the plan was for the Knicks to foul.

“We had a play where we wanted to catch Jayson [Tatum] moving on the run,” Ime Udoka, coaching his first regular-season game Wednesday for Boston, said afterward of Boston’s plan.

The plan went awry, however, after Tatum grabbed the inbounds pass, slipped and fell. Instead of grabbing him, the Knicks players froze, allowing Tatum to get up and fire a pass to a wide open Dennis Schroder in the middle of the court. With everyone then scrambling to catch up, Schroder dribbled into the frontcourt, drew Walker toward him and swung a pass to Marcus Smart, who buried the game-tying 3-pointer as the buzzer sounded, leaving the building in shocked silence and sending the game to overtime.

“I just tried to get it up and I slipped,” Tatum said. “And then I saw [Fournier] came and doubled, threw it to Dennis and he found a wide-open Smart. He knocked it down and gave us a chance.”

From there, both teams spent the next 10 minutes of game action looking like exhausted heavyweight fighters trying to make it through the final rounds of a championship bout. After the teams each scored 12 points in the first two minutes of the first overtime, they combined to miss all 10 shots they took while going scoreless during the rest of it. That included an ugly miss by Tatum after he held the ball for a final shot.

“Sometimes you’ve gotta laugh at yourself,” Tatum said of his ugly shooting performance, shaking his head. “I guess I’m good for one of those a season.

The second overtime then devolved into a true slog, with each team only scoring once over the opening three minutes. But after Tatum pushed Boston into the lead with a nifty drive and an and-one finger roll, the Knicks responded with a Fournier 3-pointer and a floater by Derrick Rose on back-to-back possessions in the final minute providing New York’s final margin of victory.

“It was crazy,” Fournier, who finished with 32 points, said with a smile. “The atmosphere, the fans, the game itself — it was fun to go to OT, but I wish we had killed that game in the first 48 minutes.

“But it was a dogfight, really, especially toward the end. I’m sure you guys could see we were both tired.”

The craziness of the ending overshadowed the original reason Wednesday night’s game was significant: It was Walker’s debut as a Knick. The Bronx native with a certified legendary New York City basketball background — between his time at Harlem’s Rice High School and his exploits at the University of Connecticut in this arena — said he couldn’t believe he was hearing his name being called during pre-game introductions.

“So much was running through my mind,” said Walker, who flashed an “X” for his home borough, The Bronx, as he came out onto the court to a raucous ovation. “Just really couldn’t believe it. Really just playing for the home team.

“I’m really a kid from the Bronx, born and raised in this city. To put that jersey on for the first time, for the real regular season, and being announced, man … it was definitely an amazing feeling.”

Walker’s performance itself was a mixed bag. He finished with 10 points, eight rebounds, three assists and four turnovers, including two ghastly ones on back-to-back possessions in the final 30 seconds of regulation that allowed Boston to begin creeping back into the game. He played 35 minutes and wound up being subbed out for Rose for the second overtime.

Walker, who was traded away by the Celtics this offseason, said he spent time with his former teammates after the game. He said it wasn’t weird playing against them in his first game as a Knick.

“Maybe if I was somewhere else it would’ve been weird,” Walker said. “But being that I’m with the home team, nah, it wasn’t weird. I just felt like everybody just kind of had my back, you know? My teammates, the city, the fans, everybody. It wasn’t weird. I have a lot of love for those guys. You could see it before the game. I have a great relationship, man.

The feelings were mutual from the other side, as well.

“That’s my guy, man,” said Brown, whose 46 points were the most ever scored by a Celtics player in a season opener, surpassing Hall of Famers Paul Pierce and Bob Cousy (35). “Can’t say enough good things about Kemba Walker. He’s just one of those guys that you like to be around, man.

“Kemba was great for me and my time in Boston. He was warm, he was accepting, he allowed me to be myself. Some guys get envious or things like that. Not Kemba Walker, man. So I’m very grateful for the time I spent and things I got to learn. It was great sharing the floor with him. I’m happy for him being in his hometown. I said hello to his family, his mom was at the game, so it was great.”