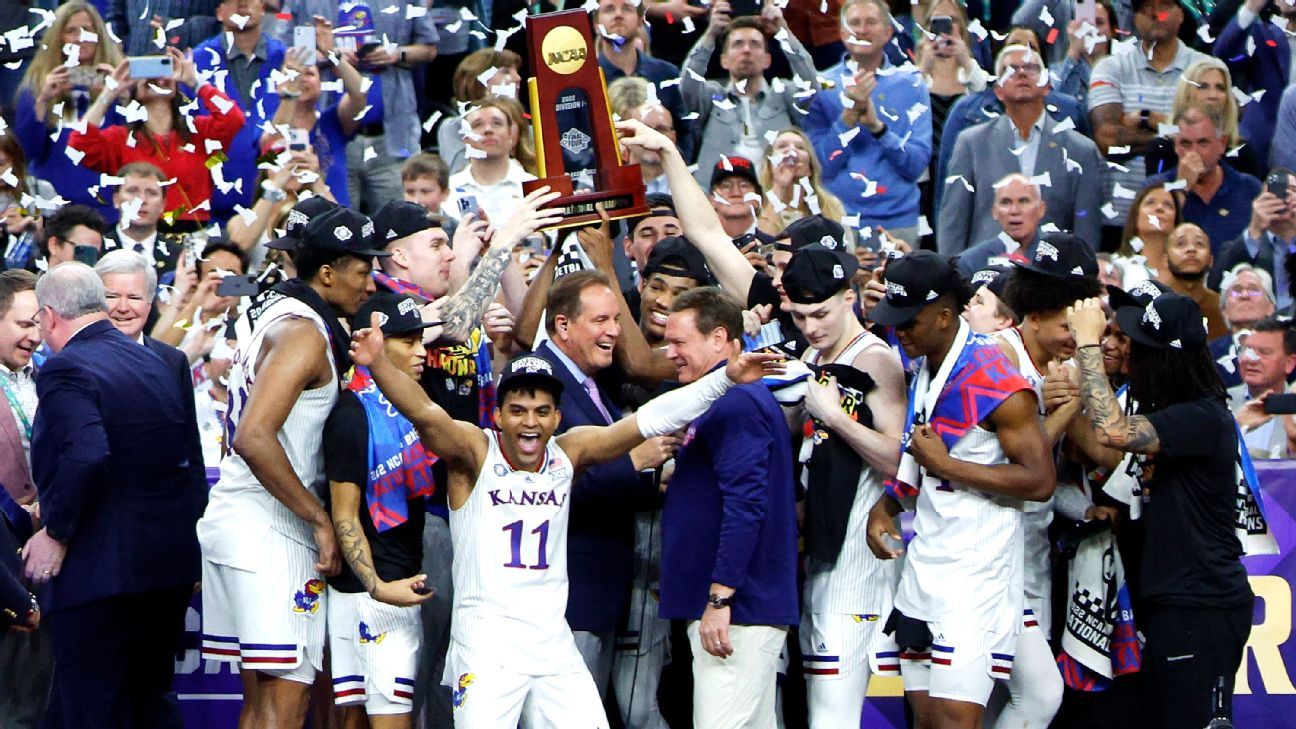 NEW ORLEANS — As Kansas entered its locker room down 15 points to North Carolina in Monday’s men’s national championship game, David McCormack was smiling at his teammates.

Fifteen-point deficit? Title on the line? Smiling in the locker room?

“I was like, why are you smiling, dude? We’re down 15,” Braun said. “He was telling me, keep your head up, keep going, we’ll be all right. I was like, man, I don’t know if I’ve ever been here before. Down 15 in a national championship game. I’ve definitely never been there.”

But McCormack backed up his confidence, hitting the two biggest baskets of the game for Kansas and helping the Jayhawks overcome a 16-point first-half deficit to beat North Carolina 72-69 for the program’s fourth national championship and first since 2008.

The 16-point deficit was the largest ever overcome to win a national championship, surpassing the previous record of 15 points set by Loyola Chicago against Cincinnati in 1963.

Concerns about North Carolina coming out flat after the emotional semifinal win over Duke on Saturday seemed warranted in the opening minutes. Kansas scored the game’s first seven points, with the Jayhawks’ two Saturday stars — Ochai Agbaji and McCormack — carrying their momentum over. Agbaji hit a 3 to start the game and McCormack was making an impact at both ends of the floor, even beating Armando Bacot to a loose ball by diving on the floor.

The 9-3 start, combined with Bacot’s labored pregame movement, gave the impression this was Kansas’ title to lose.

That was one of the final times the Jayhawks had any sort of momentum in the first half.

Bacot, who had suffered an ankle injury late in the second half of Saturday’s game, started to get loose and come to life. He had a jump hook coming out of the under-16 timeout and assisted a Leaky Black layup two possessions later after R.J. Davis and Bacot each saved the ball from going out of bounds. Remy Martin‘s banked 3-pointer with 10:27 left gave Kansas an 18-14 lead — but North Carolina outscored the Jayhawks 25-7 the rest of the half. Kansas made just three shots from the field over that span and finished the half making 4 of 14 layup attempts.

Agbaji cut Carolina’s lead to 13 with a pull-up jumper with 23 seconds left, but in a play indicative of the first half, Puff Johnson grabbed an offensive rebound and laid the ball in as the first half came to a close.

According to the NCAA, North Carolina’s 15-point edge at the break was tied for the fourth-biggest halftime lead in championship game history. It ended up being the largest halftime deficit overcome in a national title game.

Entering Monday, Kansas had trailed at halftime just once in this year’s NCAA tournament. It was in the Elite Eight against Miami, when the Jayhawks turned a six-point halftime deficit into a 26-point win. They outscored the Hurricanes 47-15 in the final 20 minutes of that one. After that game, coach Bill Self said the big point he made at halftime was simply, “We need to play better.”

On Monday, there was a similar lack of inspiration. Self said he asked his team one question at the final timeout before halftime: “Which would be harder, being down nine with two minutes left or being down 15 with 20?”

It was a reference to Kansas’s last national championship, when the Jayhawks came from nine points down with 2:12 left to beat Memphis in 2008.

“He obviously challenged us and he was amped up in there,” Agbaji said. “It was a matter of us playing our game and taking away what they were getting at in the first half.”

Kansas came out of halftime on a tear, with McCormack dunking it emphatically on the Jayhawks’ opening possession. After two Caleb Love buckets pushed the lead back to 12 and seemed to slow Kansas’ momentum, the Jayhawks went on a 12-1 run to get within one. It could have been worse for the Tar Heels, too. Agbaji was fouled by Black on back-to-back possessions — resulting in Black’s third and fourth fouls — but made just one of his five free-throw attempts.

The Jayhawks were finding success in the open floor. North Carolina turned it over four times in the first eight minutes of the second half, while also forcing jumpers leading to long rebounds, and Kansas had six quick fast-break points after getting only two in the first half.

An Agbaji three-point play with 10:53 left tied the score at 50, and Kansas extended its lead to six after a Martin 3 and a Jalen Wilson three-point play. It ultimately was a 31-10 run to start the second half.

Carolina’s response was highlighted by the unlikeliest of players. Johnson, who scored eight points total over the previous four games, buried a corner 3 off a Davis drive to tie the score at 57. With Black on the bench, Davis needed someone from the Tar Heels’ short and sparingly-used bench to step up and make plays at both ends of the floor — and Johnson filled that role. At one point in the second half, he scored seven straight Carolina points.

“My whole thing this whole year has been just to stay ready whenever your number is called,” said Johnson, who left the game late in the second half after vomiting on the court. “I can honestly just say that I gave it everything I had.”

Kansas’ second-half catalyst was also a bench player, Martin. Martin has been someone who divides opinions throughout his college career. Inarguably a talented offensive player, there were questions whether he would be able to translate his game from Arizona State, where he was a two-time All-Pac-12 player and averaged 19.1 points in both 2020 and 2021, to Kansas, where his scoring wouldn’t be needed as often.

After scoring in double figures in 10 of his first 12 games in Lawrence, he had a 21-game stretch in which he missed 10 games through injury and averaged 3.2 points in the other 11 games. He then came alive down the stretch of the season, scoring 12 points in the Big 12 title game and averaging 19.3 points in the first three NCAA tournament games.

Back in December, after a win over St. John’s, Self was asked by ESPN to reflect on the Martin experience after one month.

“He’s got a flair about him; when the game’s tight, he likes it,” Self said. “I like that. I think he’ll fight back. I think the experiment is going to work out fine.”

On Monday night, Martin looked tentative early. His first three shots didn’t come close to going in, and he hesitated on a wide-open 3 in the first half. The banked-in 3-pointer in the first half gave him some confidence, though, and he was arguably Kansas’ best player in the second half. Martin had 11 points after halftime, including three 3-pointers and three go-ahead baskets.

“This year has been a tough year individually for me, just injuries and just hard to find a groove sometimes. But it felt great,” Martin said. “In the second half, I just came in there, tried to make something happen and shot the shots with confidence and just tried to make plays.”

Whichever team made the final run was going to win the national championship.

McCormack hit a jump hook with 1:20 left following an offensive rebound to give Kansas a one-point lead. On Carolina’s next possession, Bacot looked to drive past McCormack, but injured himself after slipping and had to leave the game. Unlike the semifinal game against Duke, Bacot wouldn’t return on Monday and needed to be helped on and off the podium for the postgame news conferences.

With Bacot out of the game, Kansas went right back to McCormack, and he hit another jump hook with 22 seconds left to push the lead to three.

Love and Johnson missed game-tying 3-point attempts, and Brady Manek‘s pass after an offensive rebound rolled out of bounds. But Carolina would have one more chance, as Dajuan Harris Jr. stepped out of bounds with 4.3 seconds left after catching Kansas’ inbounds pass.

Love, who had hit big shot after big shot all tournament, had a contested 3-point attempt over Braun, but it fell short as time expired.

Carolina’s backcourt duo of Love and Davis had been so effective all tournament but struggled to get in a rhythm on Monday night. They shot a combined 10-for-41 from the field, including 1-for-13 from 3-point range. Bacot had 15 points and 15 rebounds, becoming the first player in NCAA history with six double-doubles in one tournament.

Meanwhile, McCormack and Wilson each finished with 15 points, but it was Agbaji (14 points) who took home Most Outstanding Player honors.

“He’s the most accomplished player that we have had at our university since Danny [Manning],” Self said.

Over the past week, Self and his players have talked about how part of the motivation for this season’s Final Four run has been trying to win one for the 2020 Kansas team. Before the NCAA tournament was canceled due to the coronavirus pandemic, the Jayhawks were the best team in the country and would have been the favorites to cut down the nets.

Agbaji and McCormack were starters on that team, while Braun was a key reserve.

During the celebrations after Monday’s win, Self went over to the section of former Kansas players in the crowd. He hugged everyone — Drew Gooden, Paul Pierce, Mario Chalmers, etc. — as well as Devon Dotson, the star point guard and leading scorer on that 2020 Kansas team.

Unlike the other players in that section, Self gave Dotson one of the national champion hats this year’s coaches and players received.

“After the way these guys played in the last month, I think this team can play with any team Kansas has ever put on the floor.”