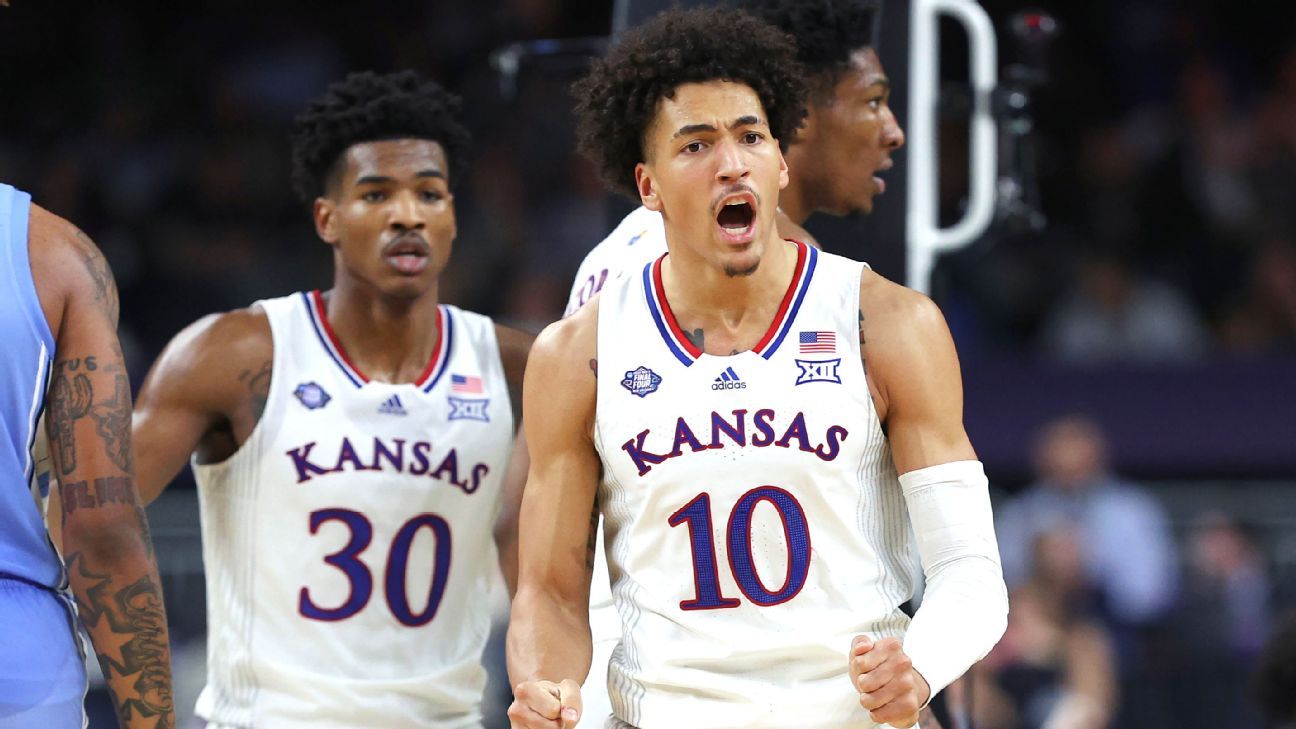 NEW ORLEANS — Entering Monday, Kansas had trailed at halftime just once in this year’s NCAA tournament. It was in the Elite Eight against Miami, when the Jayhawks turned a six-point halftime deficit into a 26-point win. They outscored the Hurricanes 47-15 in the final 20 minutes of that one.

“I told them we need to play better,” coach Bill Self said after that game. “And the lid was going to come off eventually.”

He might have reused his halftime speech from just over a week ago on Monday.

Kansas erased a 15-point halftime deficit to come back and beat North Carolina 72-69 in the national championship game.

It is the Jayhawks’ fourth national championship and the program’s first since 2008.

David McCormack hit a jump-hook with 1:20 left following an offensive rebound to give Kansas a one-point lead, and after a turnover by North Carolina on the following possession, McCormack hit another jump hook with 22 seconds left to push the lead to three.

Caleb Love and Puff Johnson missed game-tying 3-point attempts, and Brady Manek‘s pass after an offensive rebound rolled out of bounds. But Carolina would have one more chance, as Dajuan Harris Jr. stepped out of bounds with 4.3 seconds left after catching Kansas’ inbounds pass.

Love’s 3-pointer in the final seconds came up short, though.

Concerns about North Carolina coming out flat after the emotional win over Duke on Saturday seemed warranted in the opening minutes. Kansas scored the game’s first seven points, with the Jayhawks’ two Saturday stars — Ochai Agbaji and David McCormack — carrying their momentum over. Agbaji hit a 3 to start the game and McCormack was making an impact at both ends of the floor, even beating Armando Bacot to a loose ball by diving on the floor.

The 9-3 start, combined with Bacot’s labored pregame movement, gave off the impression this was Kansas’ title to lose.

That was one of the final times the Jayhawks had any sort of momentum in the first half.

Bacot, who suffered an ankle injury late in the second half of Saturday’s game, started to get loose and come to life. He had a jump-hook coming out of the under-16 timeout and assisted a Leaky Black layup two possessions later after R.J. Davis and Bacot each saved the ball from going out of bounds.

Carolina calmed down and looked more comfortable at both ends of the floor. McCormack’s early success began to hit a wall. Kansas was looking to get him a post touch nearly every possession, but Bacot was holding his ground and forcing McCormack to score over him or through traffic. After an early five points, Agbaji struggled to get clean looks against Black, who has been one of the tournament’s best defensive players.

The Tar Heels also began to dominate the offensive glass. They had five offensive rebounds and 12 second-chance points through 11-plus minutes, which also helped get McCormack and Mitch Lightfoot into foul trouble.

Remy Martin‘s banked 3-pointer with 10:27 left gave Kansas an 18-14 lead — but North Carolina outscored the Jayhawks 25-7 the rest of the half. Kansas made just three shots from the field over that span and finished the half making 4 of 14 layup attempts.

Agbaji cut Carolina’s lead to 13 with a pull-up jumper with 23 seconds left, but in a play indicative of the first half, Puff Johnson grabbed an offensive rebound and laid the ball in as the first half came to a close.

According to the NCAA, North Carolina’s 15-point edge at the break was tied for the fourth-biggest halftime lead in championship game history.

Kansas came out of halftime on a tear, with McCormack dunking it emphatically on the Jayhawks’ opening possession. After two Caleb Love buckets pushed the lead back to 12 and seemed to slow Kansas’ momentum, the Jayhawks went on 12-1 run to get within one. It could have been worse for the Tar Heels, too. Agbaji was fouled by Leaky Black on back-to-back possessions – resulting in Black’s third and fourth fouls – but made just one of his five free-throw attempts.

The Jayhawks were finding success in the open floor. North Carolina turned it over four times in the first eight minutes of the second half, while also forcing jumpers leading to long rebounds, and Kansas had six quick fast-break points after getting only two in the first half.

Carolina’s response was highlighted by the unlikeliest of players. Puff Johnson, who scored eight points total over the last four games, buried a corner 3 off a Davis drive — and-kick to tie the game at 57. With Black on the bench, Davis needed someone from the Tar Heels’ short and sparingly-used bench to step up and make plays at both ends of the floor — and Johnson filled that role. At one point in the second half, he scored seven straight Carolina points.

All setting up a final 90 seconds with the national championship in the balance.