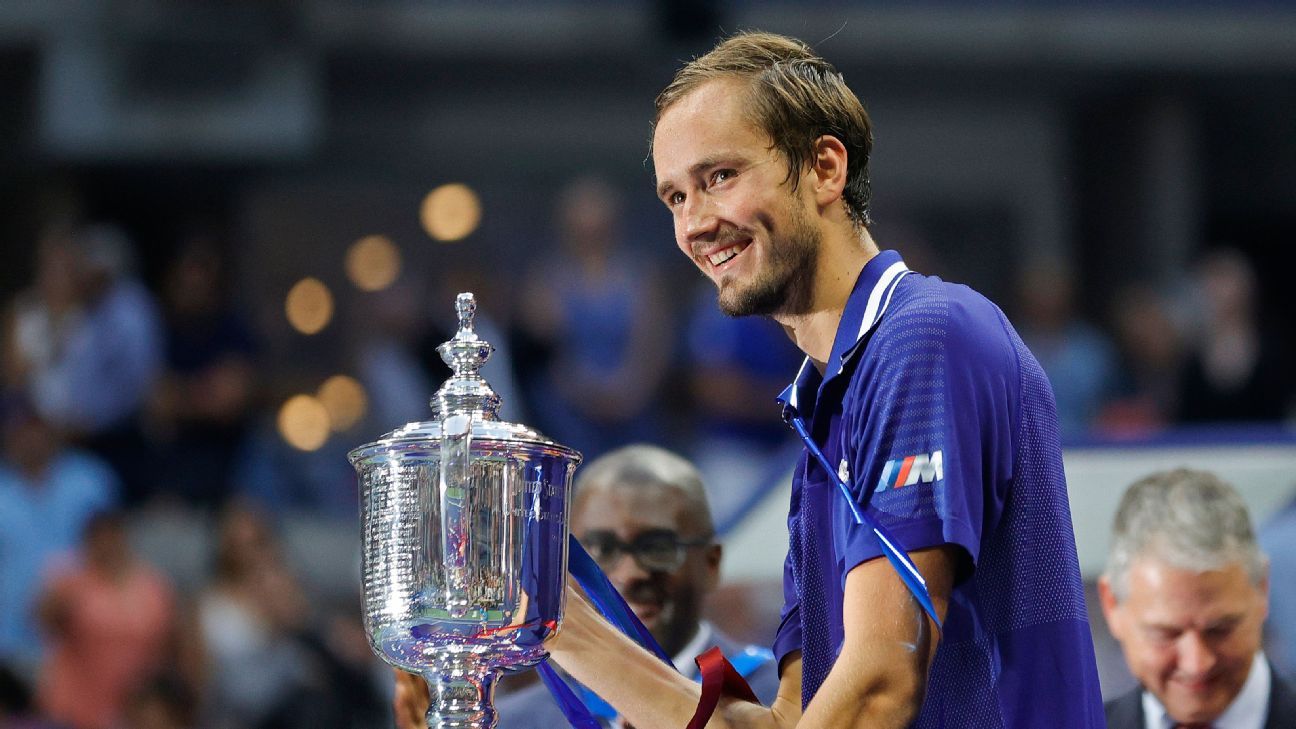 NEW YORK — Daniil Medvedev earned his first major title by beating Novak Djokovic at his own game in a stunning upset Sunday in the US Open men’s final.

Medvedev denied Djokovic a victory that would have given him the first calendar-year Grand Slam in men’s tennis since 1969, beating the No. 1-ranked player 6-4, 6-4, 6-4.

“First of all, I want to say ‘sorry’ for you fans and Novak, because, I mean, we all know what he was going for today,” said Medvedev, a 25-year-old from Russia who lost to Djokovic in this year’s Australian Open final and to Rafael Nadal in the 2019 US Open final.

Then, turning toward Djokovic, Medvedev offered praise for “what you accomplished this year and throughout your career” and added: “I never said this to anybody, but I’ll say it right now. For me, you are the greatest tennis player in history.”

Djokovic made a lot of mistakes in the match and admitted as much afterwards. But a lot of his issues had to do with Medvedev, who used his 6-foot-6 frame to chase down everything and respond with seemingly effortless groundstrokes — much the way Djokovic wears down foes — and delivered pinpoint serving.

Medvedev won 20 of his first 23 service points, establishing a pattern. He finished with 16 aces and 38 winners in all, 11 more than Djokovic. After overcoming multiple double faults on match point, Medvedev finally finished the job, then toppled over to the court on his side — a tribute to the “dead fish celebration” in the famous soccer video game FIFA.

“Russians know how to celebrate,” Medvedev said. “Hopefully I will not get in the news. If I get, it’s going to be in a good way. But I’m going to definitely celebrate the next few days.”

The last man to complete a true Grand Slam by going 4 for 4 at the majors in a single season remains Rod Laver, who did it twice — in 1962 and 1969 — and was in the stands Sunday. The last woman to accomplish the feat was Steffi Graf in 1988.

After a five-set win over Tokyo Olympics gold medalist Alexander Zverev in the semifinals Friday night, Djokovic looked ahead to what awaited in the final and declared, “I’m going to put my heart and my soul and my body and my head into that one. I’m going to treat the next match like it is the last match of my career.”

But he came out a bit cold Sunday, double-faulting in each of his initial two service games and mixing in enough groundstroke miscues — bowing his head or rolling his eyes after some — that 12 minutes in, Medvedev was a point from a second break and a 3-0 lead. Djokovic eventually used a couple of aces at 117 and 124 mph to hold there, but it was Medvedev who stole the show in the early going.

“Every match was different just because [Djokovic’s] so good that every match is different,” Medvedev said of his game plan heading into the match. “He changes his tactics, he changes his approach. Was he at his best? Maybe not today. He had a lot of pressure.

This was the fifth consecutive match in which Djokovic dropped the first set — and 11th in Grand Slam play this year. Unlike in the other instances, he could not come back.

Medvedev, who lost only one set in the entire tournament, didn’t allow it.

“For the confidence and for my future career,” Medvedev said, “knowing that I beat somebody who was 27-0 in a year in Grand Slams … he was going for huge history, and knowing that I managed to stop him it definitely makes it sweeter and brings me confidence for what is to come on hard courts so far, but let’s see about other surfaces.”