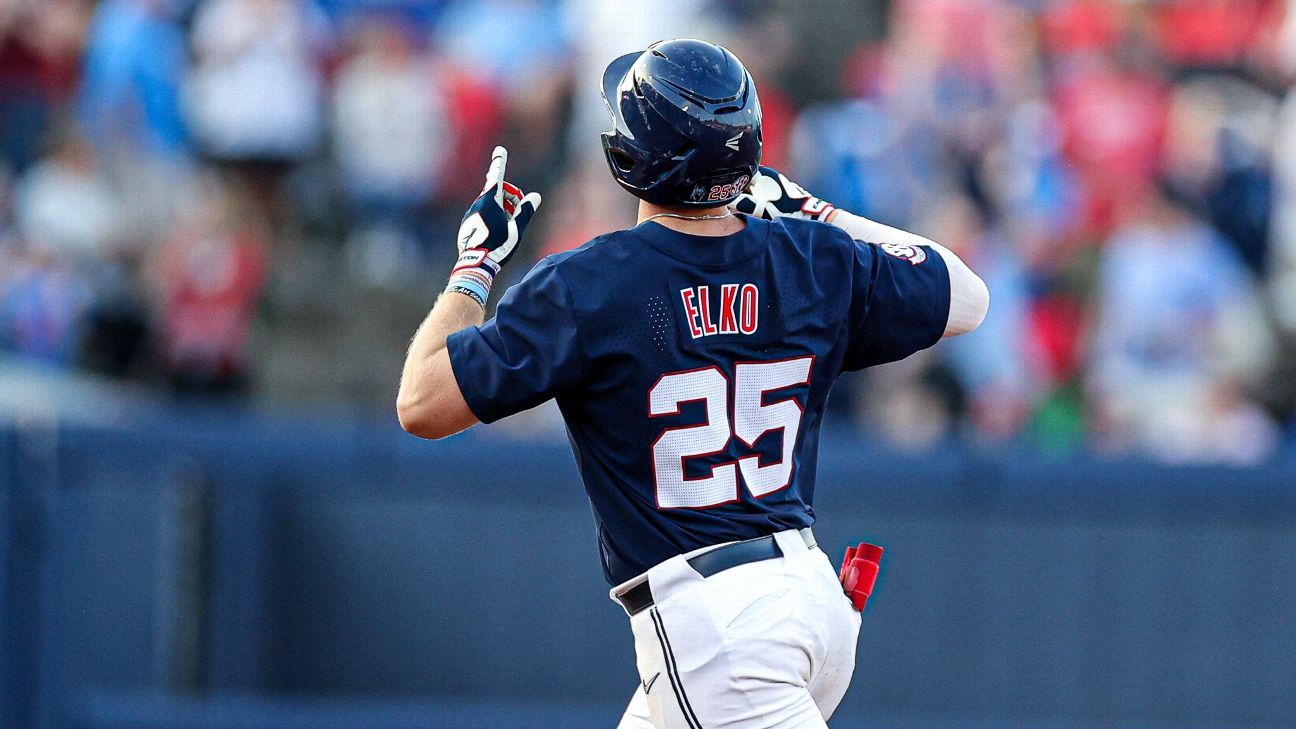 The Oklahoma Sooners enter the three-game series after rolling through three games undefeated in Omaha, Nebraska, while the Ole Miss Rebels used a dominant pitching performance to advance to Saturday.

What was key for these two teams reaching this point?

Chris Burke: The keys to these two teams reaching the finals are pitching and defense. The numbers speak for themselves: Oklahoma is 3-0 with a 3.67 ERA, 34 K’s and only six walks. Couple that with only two errors and you have a team that has limited base runners, which is always a good formula for success. Ole Miss has been even better on the mound and almost as good defensively. In four games the Rebels have allowed only seven earned runs (1.75 ERA) while issuing a measly six walks against 38 K’s. The defense has been rock solid with only three errors: add that up, and it’s pretty clear to see why these two are left standing for the finals.

Mike Rooney: OU is the most improved team in the country since the beginning of the season. The Sooners check every box, and there is no glaring weakness for this team.

Ryan McGee: Not to go full sportswriter psychologist on everyone, but both of these teams had full buy-in all season. Ole Miss went from No. 1 to vanished to “Fire the coach!” to “Last Four In” to a now a near-perfect postseason record. Oklahoma wasn’t in the preseason top 25 and flew low all season, and now it has had a gutsy all-away-games postseason run and is 3-0 in Omaha. Both clubhouses never stopped believing they could get to these finals, even when the rest of us did not.

Oklahoma wins the national championship if …

McGee: The Sooners hit it like they did a week ago. They opened with a 13-8, 11-hit win over Texas A&M and followed that by posting an 8-1 lead over Notre Dame after an inning and a half. They have more rest than Ole Miss and more starters ready to go than Ole Miss. If they can give those starters yet another big lead to work with, this could all end very quickly.

Burke: Oklahoma wins the title if it can continue to get heavy lifting from their starters. The formula of the starters handing the ball to their closer, Trevin Michael, has gotten the Sooners to this point. If they can keep getting the ball to Michael late in the games, I like their chances.

McGee: It can hold it together on the mound Saturday night. Warm everyone up. See if any bullpen alums in the grandstands have any eligibility left and warm them up, too. Throw nine guys over nine innings. Do whatever you have to do to get to your ace starters, Elliott and DeLucia, after they have recharged.

Rooney: It can extend this series to a Game 3 (when DeLucia might be available).

Burke: If its offense can get some production from the bottom third of its lineup. Right now, the trio of Dunhurst, Chatagnier and McCants is 4-35 (.114) in Omaha. If the goal is to get into the middle relief of the Sooners’ bullpen, then Ole Miss will need quality at-bats from the bottom of the lineup that drive up pitch counts and flip over the order. If they can get that, the Rebels will be in business.

Most must-watch player on Oklahoma?

Mcgee: I’m gonna give you a position to watch. Outfielder. All three of them. It’s a true joy to watch the way Kendall Petti, Tanner Treadaway and John Spikerman go about their business. They have that three-man mind-meld thing going. And they can hit.

Burke: Peyton Graham might be the most talented player in this MCWS field, and he has certainly produced at a level worthy of all the buzz. He has reached base in 10 of 15 trips to the plate and scored four runs while swiping two bases as well. Graham is the first player in OU history to hit 20-plus homers and have 30-plus stolen bases in the same season; something tells me he will be right in the middle of the action in the finals as well.

Rooney: Graham also solidified the middle of the field for OU.

Most must-watch player on Ole Miss?

McGee: Dylan DeLucia. He was dominant in Mississippi’s Thursday afternoon win that propelled it into the finals. The good news? He gave the bullpen a sorely needed game off. The bad news? He threw 113 pitches in the complete game shutout. If Ole Miss loses the Saturday opener, he could be called upon to save the series Sunday.

Burke: Kevin Graham. The senior left fielder leads the Rebels in hits so far in Omaha and has a knack for coming up big in big spots. Sitting right behind Tim Elko in the order, Graham is often overlooked, but he is dangerous in the cleanup spot. Watch out for KG. When he’s hot, he can carry the Rebs.

Rooney: He provides power and outstanding bat-to-ball skills. His run production will be a key ingredient in these finals.

Who wins it all?

Burke: This series is sure to be full of high drama. The way each team is pitching and defending it seems like these games are setting up to be very close and potentially low scoring. Hard to say who ends up on top, but I will be shocked if it doesn’t go three games.

McGee: The Sooners are rested and ready to go. Sometimes that’s bad, giving a team too much time off in Omaha and forcing players to shake off some rust for the start of the title series. But this is the new MCWS format. A few days of rest isn’t as long as some teams would have in the old bracket, and these game turnarounds have been tight this week, so rest is more crucial than ever. Fresher arms plus more arms equals a big Sooners advantage.

Stoops on Calipari football dig: ‘I stay in my lane’