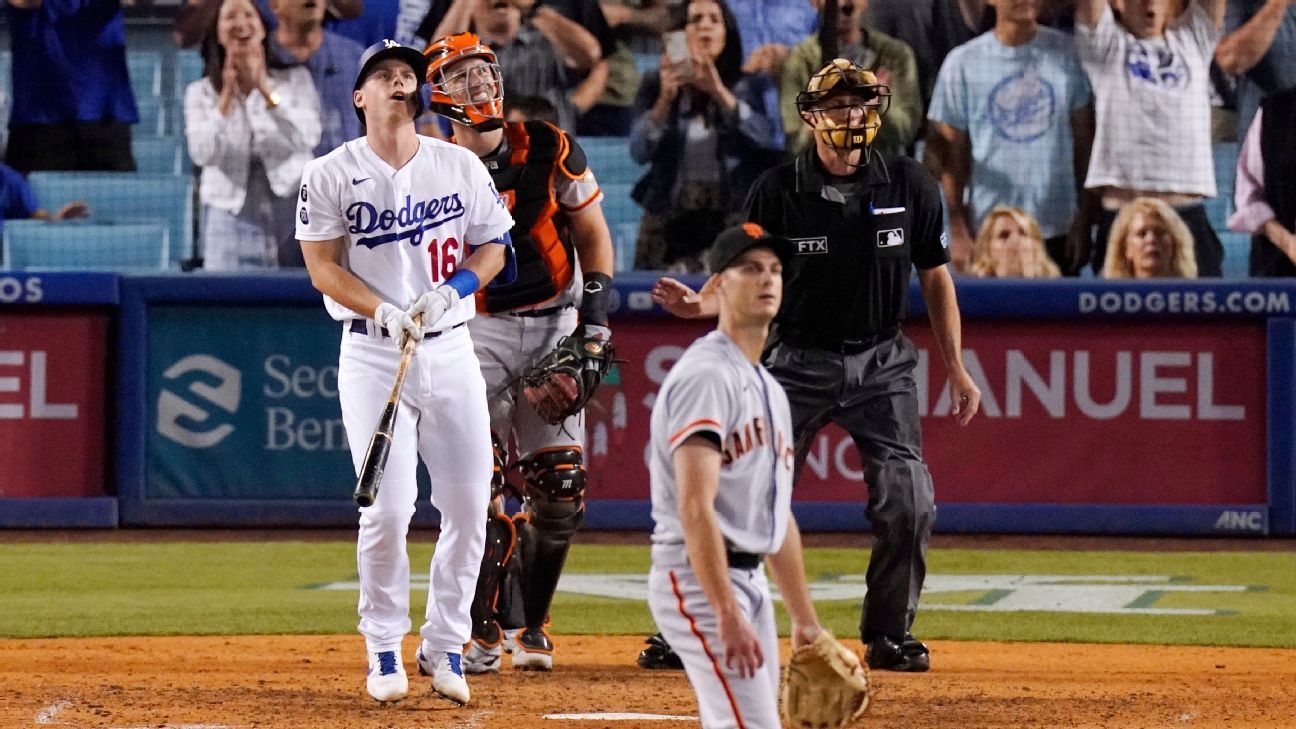 Which team is better: the San Francisco Giants or the Los Angeles Dodgers? If you’ve followed our MLB Power Rankings, you’ve seen them flip back and forth, just about all season long, between the No. 1 and No. 2 spots in all of baseball.

The argument for the Dodgers? They’re the defending World Series champions and are positively loaded with star power!

The Giants? They held off L.A. and won the division!

Whichever side you’re on, though, we’re about to find out the answer — at least as far as 2021 is concerned — as the two National League West powerhouses meet up in the NL Division Series after the Dodgers beat the Cardinals in a walk-off on Wednesday night. As we get set for a series that will leave the victor as the favorite to win the pennant, ESPN baseball experts Alden Gonzalez and Tim Keown break down what this matchup means and what each team needs to do to win — and give their picks for who will come out on top.

Gonzalez: Put it this way: I can’t imagine how there could possibly be a better one. Start with the fact that this is one of the most historic rivalries in baseball history, featuring two teams that had previously never faced off in the postseason, then think about how it all ended — with the Dodgers surging down the stretch, fighting fervently to chase down their ninth consecutive division title, and the Giants refusing to cede. The Dodgers went 43-13 after the start of August, yet they made up only two games on the Giants. Wild.

Keown: This question is too limiting. Purely from a record standpoint, this would be the most epic World Series matchup ever in the 162-game era. Two teams have never exceeded 105 wins in the same season — ever — which is a testament to the talents of these two teams and the futility of many others. Add in the divisional rivalry and the tight matchups this season (10-9 Giants) and the only problem with this series is that we don’t get to see it play out over seven games.

Is this the best rivalry in baseball right now?

Keown: I can only assume you mean besides Dodgers-Padres? (Ah, memories.) Right now, there’s nothing that compares to this one. There are the historical and geographic aspects of the rivalry, sure, but there’s something more elemental at work: The Giants have been crafted, at least in part, by two people (president of baseball operations Farhan Zaidi and manager Gabe Kapler) who also helped to devise the roster-building philosophy that has led to the Dodgers’ recent run of dominance. And they’ve done it in San Francisco very quickly and very similarly, with an emphasis on depth and versatility. These two teams have been so evenly matched this season, with so many fantastic games, that (again) we deserve a seven-game series. Which reminds me: Is there still a dent in the ground in front of the Dodgers’ dugout where Dave Roberts spiked his cap after Darin Ruf‘s (non)check swing?

Gonzalez: Ah, yes, the check swing. Crazy how the division might have been decided by that call, or Sheldon Neuse not stretching on a close play at second base, or Mike Tauchman robbing Albert Pujols of a walk-off home run. Heading into the final regular-season series between these two teams, the Dodgers and Giants had not only split their first 16 games against each other but the combined score was 68-68. The Giants wound up taking two of three, but we deserve more of these games. The only thing that might have kept this from being the best rivalry going was that it became a slow burn. We anticipated that the NL West would come down to Dodgers-Padres, and it seems as if most of America didn’t concede to the Giants being at that level until the regular season concluded.

The Giants will win the series if … ?

Gonzalez: Kris Bryant gets hot again. The Giants’ offense isn’t reliant on one player, of course. Far from it. But Brandon Belt‘s absence leaves a major power void in this lineup. And Bryant is especially capable of filling it. Since the start of September, he’s batting only .245/.353/.347. But he can turn it on quickly. And he’ll need to against a Dodgers pitching staff with an abundance of power right-handed arms.

Keown: I’m tempted to write something facile like, If they continue to be one game better than the Dodgers, but a five-game series is not the same as a 162-game season. To win three of the next five, the Giants need their starting pitchers to go postseason deep — five to six innings — in each game. The bullpen has been phenomenal, and the cometlike emergence of 22-year-old closer Camilo Doval gives them another inning of depth, but it will limit the early- to middle-inning variables if Kevin Gausman, Logan Webb and Anthony DeSclafani (presumably) can work their way through the Dodgers’ lineup three times each. It will also indicate an ability to keep the Dodgers from rolling out four- and five-run innings, a particular specialty of theirs. However: Even this prediction is squishy because the Giants have won games so many different ways, and with so many different contributions (and contributors), that it feels pointless to get too granular about any of it.

The Dodgers will win the series if …?

Gonzalez: Kenley Jansen closes the door. Given how closely matched these two teams have been, it might truly be that simple. The biggest ripple effect of Clayton Kershaw‘s injury might be that Julio Urias will remain a traditional starting pitcher in the postseason — he’ll take the ball in Game 2 — and Roberts won’t have the flexibility to use him in that hybrid bullpen role he has thrived in during prior Octobers. Urias, if you remember, recorded the last out of the World Series last year, not Jansen. Now, though, the ninth inning will belong to Jansen. He has had a very good year — 2.22 ERA, 1.04 WHIP, 30.9 strikeout percentage — but two of his five blown saves came against the Giants.

Keown: It’s equally difficult to be reductive on this side, but Max Muncy‘s elbow injury throws a big bright light on Cody Bellinger. He has been one of the worst offensive players in baseball, and he seems particularly susceptible to swings of confidence. Muncy’s injury leaves Corey Seager as the Dodgers’ only marquee left-handed bat against the Giants’ three right-handed starters (presumably Gausman, Webb and DeSclafani.) Granted, the Dodgers’ offense is good enough at the top and deep enough at the bottom to withstand an injury, even one this major. But Bellinger and his subterranean 45 OPS+ might end up playing first base, which also serves to degrade L.A.’s outfield defense while adding another pitcher-level hitter to the order. Another option at first: Pujols, whose range is roughly his wingspan and who stands a chance of becoming the first player in an NLDS to hit into a 7-4-3 ground ball double play.

Is the winner of this LDS going to the World Series?

Gonzalez: The Brewers were my pick to win the World Series, but then Devin Williams, one of their two most important relievers, broke his hand punching a wall. And one reliever usually doesn’t make that big a difference, but it should, given how good the Dodgers and Giants are. In short — yes, the winner of this series is going to the World Series — assuming the team doesn’t completely exhaust its pitching just to survive what should be a remarkably close LDS.

Play for FREE and compete to win $9K of prizes throughout the MLB postseason!
Make Your Picks

Keown: Without question. What’s wild about these two teams is how they’ve been forced to play playoff baseball for nearly half a season. How do you win 106 games and finish second? How do you win 107 and be pushed to the final day? One way is by treating nearly every game like Game 7 — or, in the unfortunate reality of our current discussion, Game 5 — and along the way finding out exactly what works and what doesn’t. For this season at least, these two teams have nailed down the formula.

Prediction time! Who ya got and why?

Gonzalez: I predict that the series will be decided in the 15th inning of Game 5. And given how this matchup has played out, I predict that whatever prediction one makes is bound to look foolish in hindsight.

Keown: Giants in five, mostly because betting against them this season, while popular, has proved to be both foolish and unfulfilling. They win, whatever way they can, and scoff at your predictions.