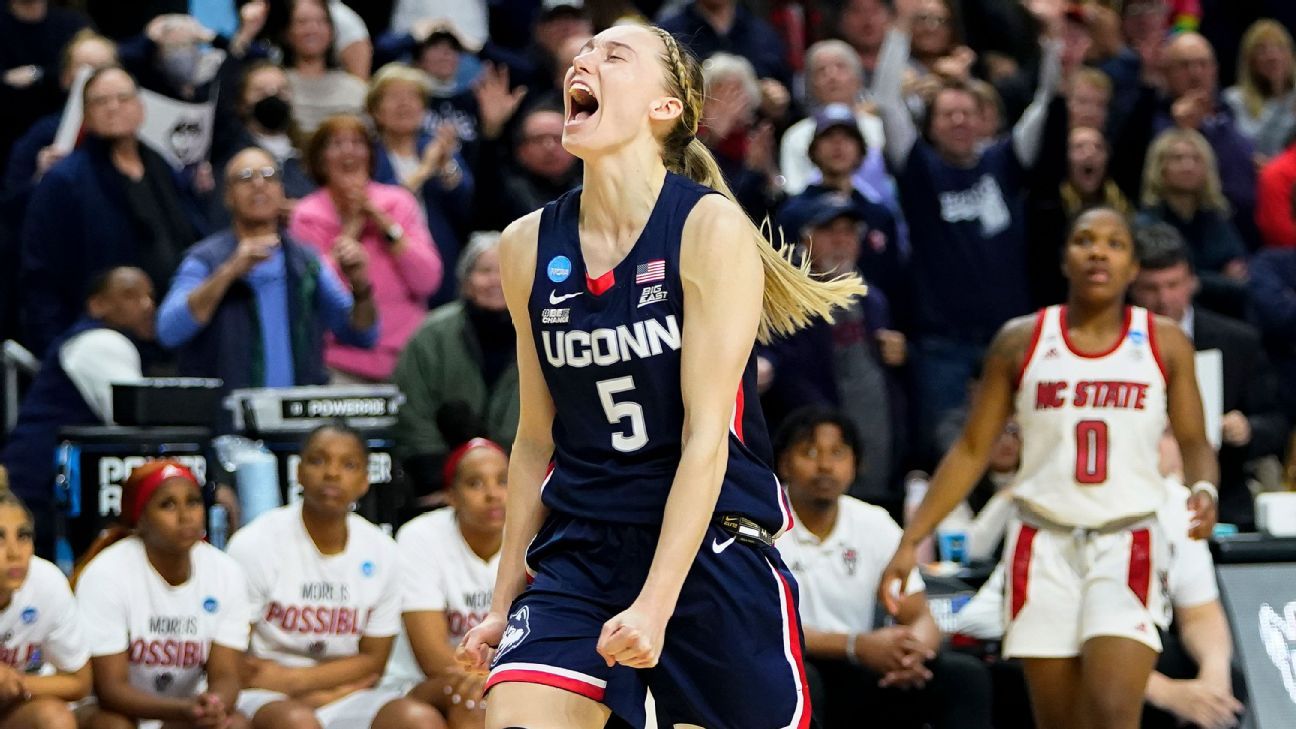 MINNEAPOLIS — When Paige Bueckers walked into the family ballroom at the UConn hotel in Minneapolis, she headed straight for Tara Starks. Bueckers’ former AAU coach knew what was coming, and turned just as she leaped toward her, colliding with her side. It’s a traditional greeting for the two, even if Starks sometimes wished it wasn’t.

“I always tell her, ‘My knees are bad. My back is bad. What’s wrong with you?'” Starks said. “But it’s almost like the same kid I would sit and talk to in 11th grade. She’s not any different.”

Bueckers grew up in St. Louis Park, a suburb east of Minneapolis, 10 minutes from Target Center, where the women’s Final Four will be played Friday. She played at Hopkins High School in Minnetonka. She has won a state championship at the University of Minnesota’s Williams Arena — known in the Twin Cities as The Barn — and lost at Target Center. There’s even a mural of Bueckers in the form of a Gatorade ad in Mall of America.

Bueckers led the Huskies to the Final Four with an incredible performance in a double-overtime thriller against NC State in the Elite Eight. The sophomore poured in 27 points and snagged six rebounds in the 91-87 victory that earned the Huskies their 14th consecutive Final Four berth. And she did it while continuing to work her way back from surgery to repair a tibial plateau fracture and torn meniscus in her left knee.

“Our program is not going to win this game,” UConn coach Geno Auriemma said, addressing reporters after the win against NC State on Monday night. “Programs can get you to this game, but somebody needs to be big. Without a performance like that, there is no [Final Four].”

Nearly four months ago, it looked doubtful that Bueckers — and UConn — would make it here at all.

At Gampel Pavilion on Dec. 5, Bueckers dribbled up the floor with UConn up 70-52 over Notre Dame. As she bounced the ball with her right hand and shuffled her feet to get by a defender, she stumbled. After a few more steps, Bueckers crumpled into a heap on the hardwood in front of the UConn bench with 38.5 seconds left in the game.

Bob Bueckers, Paige’s father, finished watching the game on TV from his home in Maryland. Then he silenced his phone and just laid down, heartbroken.

“I felt so terrible for her,” Bob said. “All the work she put in, and then just some freak little accident. And all of a sudden, she’s injured.”

Bueckers underwent surgery to repair her left knee Dec. 13. That month was rough for the Huskies. In addition to Bueckers, freshman Azzi Fudd and sophomore guard Nika Muhl were out with foot injuries. Saylor Poffenbarger and Mir McLean transferred. UConn traveled down to Atlanta and encountered a suffocating Georgia Tech defense, losing 57-44 in its first defeat to an unranked team in 239 games.

Fudd, one of Bueckers’ closest friends, knows what it was like to be sidelined for an extended period. She tore her ACL and MCL playing against Bueckers during a 3-on-3 tournament in April 2019. Soon after her return to the court, the COVID-19 pandemic started, and even as she fit in some AAU games, she injured her foot before arriving in Storrs.

After the Huskies lost to Arizona in last year’s Final Four, Bueckers underwent surgery on April 30 to repair an osteochondral defect in her right ankle. She spent the whole summer in a boot, months before the knee injury in December. Fudd uniquely understands those frustrations her friend and teammate endured.

“The biggest thing was at the beginning when it seems like your world has come to an end,” Fudd said. “She didn’t really know what was in store for her. But I was there to remind her of the little things, the small milestones for her to look forward to. Reminding her that she’s still Paige Bueckers, and keeping her spirits high.”

Bueckers missed 19 games. In that stretch, UConn lost four. Her first game back was Feb. 25 against St. John’s. She played 13 minutes and scored eight points in the Huskies’ rout. In her first five games back before the NCAA tournament, Bueckers averaged 6 points, 2.6 assists in 18.8 minutes per game. In the NCAA tournament, Bueckers is averaging 17.5 points, 2.5 assists in 33.75 minutes per game.

The Elite Eight proved that Bueckers, who was the first freshman to be named national player of the year in 2021, can still take over a game.

Bueckers has never won a championship at Target Center. The last time she played there was as a sophomore in March 2018, in the Minnesota High School League state tournament. Bueckers and Hopkins lost to Eastview by five points. Bueckers scored 37 points. It was the third consecutive state championship loss for Hopkins.

“[The team didn’t lose] three years in a row because of her lack of trying,” said former Hopkins head coach Brian Cosgriff.

When Bueckers did finally get her first state championship the following season, it was at The Barn. “I think there’s a reason why I’m back here, and why I’m getting the opportunity again,” Bueckers said. “It’s crazy what God does in your life.”

Bueckers’ impact on Minnesota basketball has culminated in the mural that went up in Mall of America this week. Fans, especially young fans, used to crowd her games at Hopkins, clamoring for pictures and autographs.

When UConn takes the floor against Stanford on Friday night, Bueckers will be running out onto a court that already has a piece of her. She will be looking to hoist a trophy in Target Center for the first time with her Huskies teammates. And she’ll be playing in front of her hometown crowd — with her family and close friends watching.