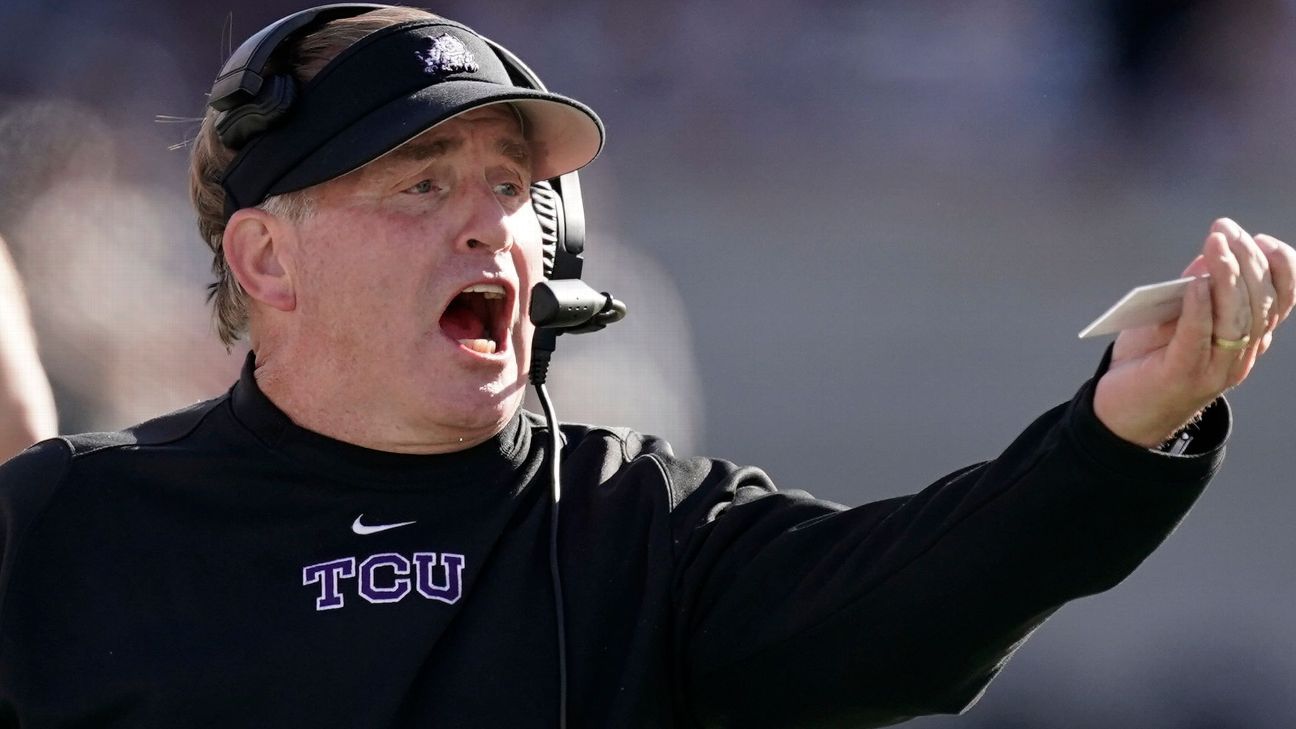 Gary Patterson is out at TCU after 20 years as coach of the Horned Frogs, the school’s athletic director Jeremiah Donati told ESPN’s Heather Dinich on Sunday night.

Patterson’s family also confirmed to ESPN’s Chris Low that he will not coach rest of the year. Jerry Kill, a top assistant on Patterson’s staff, has been named interim head coach of a team that is 3-5 overall, and 1-4 in the Big 12 this season.

TCU has lost three in a row, all in conference, including Saturday’s 31-12 defeat at Kansas State. That decision, in what turned out to be Patterson’s finale, was a microcosm of the problems that have plagued a proud program of late: The Horned Frogs can’t get off the field on defense, and can’t muster up enough offense in a points-heavy conference.

Skylar Thompson threw for 242 yards and a touchdown while also running for a score, and Deuce Vaughn added 109 yards and two touchdowns on the ground, as Kansas State rolled.

Horned Frogs quarterback Max Duggan was just 9 of 13 for 73 yards before getting benched in the third quarter, and Chandler Morris was 9 of 14 for 111 yards in relief. Kendre Miller ran for 102 yards, but most of it came on a 61-yard scamper.

Frustrations began to mount for TCU in the loss, and that didn’t likely help Patterson’s situation. Tempers flared midway through the third quarter when the Horned Frogs’ Josh Foster delivered a big hit on Thompson as he stepped out of bounds. Players from both teams joined the melee as TCU coaches tried in vain to intervene; two of their players and one from Kansas State were ejected for throwing punches.

The Horned Frogs’ frustration probably stemmed from the fact that they actually drove inside the Kansas State 5 on three occasions — two times in the first half and one in the second — and came away with a total of three points.

Later Sunday night, Donati released a statment, spanning Patterson’s tenure and the rise of the Horned Frogs to a succesful Power 5 program.

“The story of Gary Patterson and the rise in the fortunes of the TCU football program over the last 20 years is clearly one of the most remarkable in the history of college football. We are grateful to Gary and Kelsey Patterson and appreciate everything they have meant to TCU and the Fort Worth community,” he wrote. “Under his leadership, TCU has become a nationally recognized brand name in football and in collegiate athletics.”