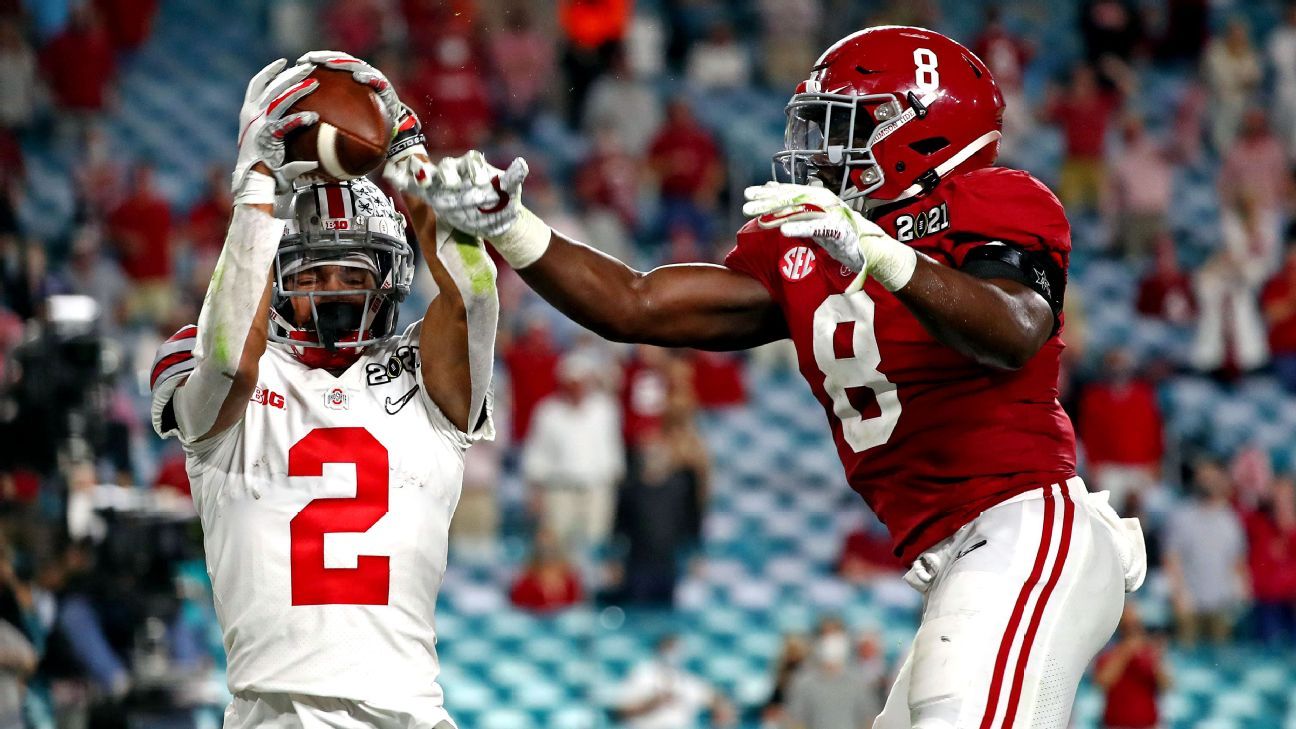 After a 2020 season and then an offseason like no other, college football is finally back.

As much as things might have changed off the field with name, image and likeness, talk of an expanded College Football Playoff (we think), and Oklahoma and Texas jumping from the Big 12 to the SEC sometime in the near future, not a lot should change on the field. Once again, there’s still plenty of distance between the haves and have-nots in the upper echelon of the FBS.

Defending national champion Alabama, Clemson, Ohio State and Oklahoma will be right back in the CFP mix, with Georgia, Texas A&M, Oregon and others trying to chase them down.

Here are my predictions for each of the Power 5 leagues:

Three bold predictions for the ACC

Clemson wins the ACC (again) but misses the CFP: If the Tigers don’t beat Georgia in Saturday night’s opener in Charlotte, they still have a great chance of running the table in the ACC, which they’ve done three times in the previous six seasons. But because of the Tigers’ remaining nonconference schedule (FCS program South Carolina State, UConn and South Carolina) and the fact they don’t play North Carolina, Notre Dame or Miami during the regular season, they might not reach the CFP for a seventh straight season, especially if teams like Alabama, Georgia, Ohio State and Oklahoma finish unbeaten or with only one loss.

Miami loses to Alabama and falls off a cliff: The Crimson Tide have not only beaten ACC teams badly in neutral-site openers since 2013, they’ve sucked the life out of them for the rest of the season. In four such openers against Virginia Tech (2013), Florida State (2017), Louisville (2018) and Duke (2019), the Tide won by an average of 29.5 points. The Seminoles were the only team that stayed within three touchdowns, losing 24-7 in Atlanta. Each of those four ACC teams went on to lose at least five games. With tricky nonconference games against Appalachian State and Michigan State coming next, the Hurricanes better not let the opener get out of hand.

Mike Norvell takes Florida State bowling again: After three straight losing seasons, including a 3-6 record in Novell’s first campaign, the Seminoles should be much improved in Year 2. FSU might open the season playing two quarterbacks (UCF transfer McKenzie Milton and Jordan Travis), but Norvell figures to settle on one of them before too long. FSU went into the transfer portal often to shore up a defense that surrendered 36 points and 456.3 yards per game in 2020. Former Georgia linebacker Jermaine Johnson and South Carolina defensive lineman Keir Thomas should provide immediate help. The slate is difficult with nonconference games against Notre Dame and Florida and ACC crossover games against Miami and North Carolina. Legendary FSU coach Bobby Bowden liked where the program was headed under Norvell, and that should be good enough for all of us to believe.

Check out highlights from Texas RB Bijan Robinson as he looks to have a strong sophomore campaign with the Longhorns.

Three bold predictions for the Big 12

This will be the last Big 12 season for Oklahoma and Texas: It’s going to get downright uncomfortable for the Longhorns and Sooners on the road during Big 12 play this season. The Longhorns’ road trips to TCU and Baylor could be very unpleasant, as well as the Sooners’ short ride to Oklahoma State for the Bedlam game on Nov. 27. I’m sure the Pokes would like nothing more than to knock the Sooners out of the CFP hunt. Even Rice’s Marching Owl Band (MOB) must be licking its chops for a Sept. 18 game in Austin. Although administrators from both OU and Texas have said they intend to honor their commitment to the Big 12 through May 2025, I’m betting they both end up in the SEC sooner than that for everyone’s sake.

Oklahoma makes the CFP but loses again: The Sooners have reached the CFP four times, losing once under Bob Stoops and three times under Lincoln Riley. OU came close to winning a semifinal game after the 2017 regular season, when Georgia came from behind to win 54-48 in two overtimes at the Rose Bowl. Of course, there’s no shame in losing to No. 1 seed Clemson in 2015, No. 1 seed Alabama in 2018 and No. 1 seed LSU in 2019, but those games weren’t very competitive. Oklahoma is getting closer and closer to narrowing the gap in terms of defensive talent, but they’ll come up short again in the semifinals this season.

Two Big 12 players will be invited to New York for the Heisman Trophy ceremony: Oklahoma quarterback Spencer Rattler is widely considered the Heisman favorite heading into the season, after passing for 3,031 yards with 34 total touchdowns in 11 games as a first-time starter in 2021. He’ll undoubtedly put up eye-popping numbers again. But Robinson, the ultra-talented Texas running back, might end up being the most valuable offensive player in the league. Last season, he averaged 8.2 yards per carry, a Texas single-season record. Unfortunately, Tom Herman committed coaching malpractice by limiting Robinson to only 86 carries — 27 fewer than quarterback Sam Ehlinger and six more than Roschon Johnson. Robinson had 355 rushing yards with six total scores in the last two games of 2020.

Jim Harbaugh saves his job: The Wolverines won’t beat Ohio State (again), but they’ll do enough to ensure that Harbaugh returns for an eighth season in 2022, which will be widely celebrated in the rest of the Big Ten. The Buckeyes will defeat the team from up north for a ninth straight time, which will equal the longest winning streak in the series (the Wolverines also won nine in a row from 1901-09). Michigan’s last victory over OSU was a 40-34 win on Nov. 26, 2011 — only 3,567 days ago if anyone is counting.

Nebraska won’t go bowling: Scott Frost knows his homecoming at Nebraska hasn’t gone as expected. The Cornhuskers under Frost are 12-21 after Saturday’s loss to Illinois, haven’t had more than a two-game winning streak and haven’t gone bowling in four years — their longest such streak in six decades. He told Nebraska fans this summer, “Starting to feel like The Charlie Daniels Band — used to be really big, now he just plays county fairs and stuff like that.” Actually, Scott, Charlie Daniels hasn’t played in quite a while (check the internet). Last month, new athletics director Trev Alberts didn’t look happy about an NCAA investigation into improper workouts during the COVID-19 shutdown (especially when the Cornhuskers didn’t seem to get any better). Sounds like Frost was in a bind because he was way behind so he was willing to make a deal. Frost even tried to dodge a game against Oklahoma. He’s certainly not upholding the spirit of the ’71 Huskers, aka the best there’s ever been.

Wisconsin will be a serious CFP contender: Few teams were as hampered by COVID-19 as the Badgers last season, and people might be sleeping on their CFP chances this season. Wisconsin’s Big Ten schedule is very favorable; it plays Penn State, Michigan, Iowa and Northwestern at home, and Illinois, Purdue, Rutgers and Minnesota on the road. Plus, it doesn’t play Indiana or Ohio State during the regular season. Wisconsin’s offense has to be better after averaging its fewest yards and points in 17 years last season. If quarterback Graham Mertz stays healthy, and tailback Jalen Berger is as good as he looked in spurts last season, the Badgers are going to be difficult to beat.

Three bold predictions for the Pac-12

A Pac-12 team makes the CFP: Pac-12 teams have grabbed only two of the 28 spots that were available in the first seven editions of the CFP. A Pac-12 team hasn’t been selected to compete in the CFP since Washington was trounced by Alabama 24-7 in a semifinal at the Chick-fil-A Peach Bowl in 2016. Pac-12 football, which seemed to be on life support at times the past few years, finally gets a much-needed jolt this season. Any one of five Pac-12 teams — Arizona State, Oregon, USC, Utah or Washington — will catch lightning in a bottle, finish 12-1 and be the No. 4 seed, after a few of the CFP favorites lose a couple of times.

Hey, remember Chip Kelly: It has been 11 years since Kelly guided Oregon and its high-flying offense to the national championship game, where the Ducks lost to Auburn 22-19 on Wes Bynum’s 19-yard field goal as time expired. Kelly spent two more seasons at Oregon, bolted for the NFL and then came back to the league at UCLA in 2018. So far, we hardly knew he was there. The Bruins went a combined 10-21 in his first three seasons, 10-15 in the Pac-12. In Kelly’s defense, he inherited a mess of a roster from Jim Mora Jr., but the 2021 team is loaded with super seniors and more talented players. If the Bruins get more consistent quarterback play, they could be a legitimate sleeper. They’ll give the Pac-12 a jolt of much-needed credibility when they stun LSU at the Rose Bowl on Saturday night.