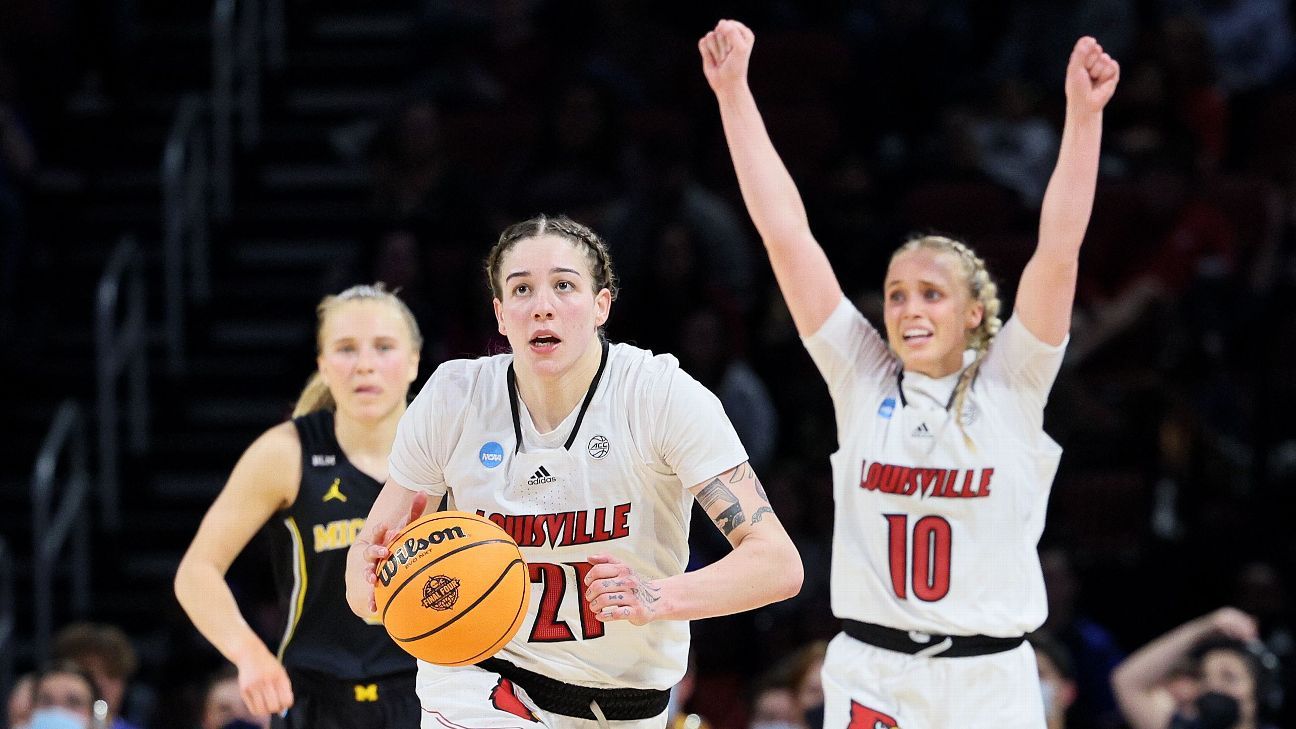 The UConn Huskies, Louisville Cardinals, South Carolina Gamecocks and Stanford Cardinal have advanced to the 2022 women’s Final Four, which will be played on Friday and Sunday at Target Center in Minneapolis.

As March Madness prepares to crown a champion, we’re ranking the players who have made the biggest impact and put in the best performances of the 2022 NCAA tournament.

How do the players stack up against their own teammates, and against the other three schools? What do the rankings tell us about each team’s depth and how both their stars and their role players have performed in the tournament?

ESPN projected the top 25 players in the country in November prior to the start of the season. The players were re-ranked in January, then against heading into the NCAA tournament and prior to the Sweet 16.

ESPN’s Charlie Creme, Alexa Philippou and Mechelle Voepel count down the 25 players one last time this season, Final Four edition. Stanford leads the way with seven players in our rankings.

Follow this link to check your Women’s Tournament Challenge bracket.

Physical, but agile. Powerful, but nimble. Those characteristics make Boston so dominant in the low post. Her physical transformation since her freshman season has produced incredible results. Boston is the best player left in the tournament and the best player in the country. — Creme

After a quiet outing in Stanford’s first-round game against Montana State, coach Tara VanDerveer told reporters that “to go where we want to go, we’re going to need more Haley [Jones].” Jones gave the Cardinal just that in their stint in Spokane, taking home the regional’s Most Outstanding Player award after compiling back-to-back double-doubles, scoring at least 17 points in each game. She also totaled 10 assists over the past two games, and her ability to get to the free throw line (10 for 11) against Texas’ pressure defense helped make the difference Sunday. — Philippou

Brink’s foul trouble has hurt her playing time at points this tournament, but there’s no denying how effective she is when she is on the floor. Case in point: Re-entering the game to start the second half against Texas on Sunday, Brink rattled off 10 points on 4-for-5 shooting from the field (and made 1 of 2 3-point attempts!), while also coming away with three blocks, three rebounds and a steal, all in the third quarter alone. She joined teammates Jones and Lexie Hull (featured below) as members of the Spokane Regional all-tournament team. — Philippou

After a somewhat quiet start to the tournament, Bueckers saved her best for the Huskies’ biggest stage to date, coming through with not just her best outing since return from injury, but arguably the best individual performance of her career, UConn’s Elite Eight win over 1-seed NC State. She scored 27 points on 10-for-15 shooting from the field, which included a run after halftime in which she hit eight consecutive shots and went 6-for-6 from the free throw line. She was named the Bridgeport regional Most Outstanding Player. — Philippou

She has led Louisville in scoring all four games of the NCAA tournament and tied her season high in assists with six against Tennessee in the Sweet 16. She is a spirited emotional leader for the team. And after saying that the Cardinals didn’t need Jimmy Fallon’s bracket (he didn’t pick Louisville for the Final Four), she later added that she was joking and would be happy to be on his show sometime. — Voepel

Hull’s 22.0 points per game throughout the NCAA tournament (on 52.4% shooting from the field, no less) paces a Stanford team that looks poised to potentially cut down the nets once more in Minneapolis. She and Jones combined for all 14 of the Cardinal’s fourth-quarter points Sunday against Texas to seal their win and spot in the Final Four — including an emphatic and-one finish through multiple defenders with 2:29 to play that effectively shifted the momentum in Stanford’s favor for good. — Philippou

The New Yorker has made the most of her season at Louisville after transferring from Syracuse, fitting in perfectly. She has led Louisville in rebounding all four games of the NCAA tournament. Her dynamic defense gets praise from coach Jeff Walz, who calls her the best Cardinal at reading passing lanes since program legend Angel McCoughtry. — Voepel

She is one of the quickest guards in Division I, and she has been a good floor general for the Gamecocks, leading them at 3.9 assists per game. She doesn’t have to score a lot to be an elite weapon for South Carolina; performances like the 13 and 12 points she had in the Sweet 16 and Elite Eight are big. — Voepel

Williams, another member of the Bridgeport Regional all-tournament team, has come through for UConn as another go-to scorer alongside Bueckers and Azzi Fudd. While Bueckers might get much of the attention from the NC State game, Williams was the one who got the Huskies started with nine of the team’s 16 first-quarter points, and she scored five straight in the second overtime to clinch the win. Her ability to attack off the bounce, and when she’s at her best hit outside shots and play tough defense, have made UConn a much more threatening team in March. — Philippou

Fudd has had some freshman moments throughout the tournament, but her 3-point shooting early on and her ability to score via her pull-up jumper or get to the rim are big reasons why the Huskies made it to Minneapolis. Perhaps most impressively, Fudd has gone 11-for-12 from the free throw line throughout the tournament, with many of those trips coming in close-game situations against UCF in the second round and NC State in the Elite Eight. Her poise and maturity in those moments make her seem well beyond her years. — Philippou

She had one of her best games of the season in the Elite Eight with 11 points and 11 rebounds, and she is averaging 11.5 boards in this NCAA tournament. As she was last season, Saxton has been a dependable sidekick to Aliyah Boston inside. — Voepel

Perhaps the dunk in the first round makes this obvious, but Belibi plays much bigger than 6-1. Her activity on the boards has been instrumental in Stanford’s four wins. Belibi’s 9.0 rebounds per game in the tournament is nearly double her regular-season average. — Creme

As good as Boston and Kamilla Cardoso are as shot-blockers, Beal is South Carolina’s defensive enforcer. She frequently draws the toughest assignment and is the face of the Gamecocks’ toughness. Her 4.9 PPG hardly represents her true value. — Creme

Cooke’s offense can be hot and cold at times, as evidenced by 15 points in the Sweet 16 and none in the Elite Eight. But she’s averaging 10.7 PPG for the season and is always one of the most solid defensive players on an incredible defense. — Voepel

Edwards really struggled at the beginning of the season, but she has managed to turn things around so that she’s now playing her most impactful basketball at the right time. Her physicality and energy, along with her ability to dominate the glass and occasionally hit some midrange jumpers, have made her indispensable, even more so now that Dorka Juhász is out with a wrist fracture. — Philippou

Her dad, John Smith, is coach of Cal Poly’s men’s team, and Smith plays like someone from a basketball family. She a steady leader who does whatever the Cardinals ask and can still go off for 20-plus points if needed. — Voepel

A transfer from Syracuse, she played alongside Louisville’s Emily Engstler last season when they were the Orange’s top two rebounders. Now they will meet in the Final Four. Cardoso is averaging 5.7 points and 5.3 rebounds off the bench and is an intimidating rim protector. — Voepel

If All-America voting were based solely on intangibles, Wilson would be on every list. Her numbers are never going to tell the whole story, or even a small part of it, but Wilson has been vital to Stanford’s 2021-22 success. — Creme

Her toughness and strength inside are huge assets, and coach Jeff Walz says the Cardinals wouldn’t be able to win without her. The black eye she got during Sweet 16 game didn’t stop Cochran. She is Louisville’s second-leading rebounder and fourth-leading scorer. — Voepel

Hall spent four seasons at Vanderbilt and then played her “super senior” season this year at Louisville. Talk about a great way to finish your college career; Vandy hasn’t been to the NCAA tournament since 2014, but Hall is now going to the Final Four. She started every game and is second on the team in steals. — Voepel

Nelson-Ododa’s scoring numbers won’t wow you, but her defense, rebounding and facilitating abilities make her a difference-maker. Physically, she got the best of Elissa Cunane much of the NC State game, and she came away with seven rebounds and had a team-high four assists. Her and Edwards’ offensive rebounding was a critical element to UConn’s success in Bridgeport. — Philippou

Westbrook has taken her new role of coming off the bench in stride and has a knack for stepping up with a big play when UConn needs one, whether it be a steal-and-score, assist or 3-pointer. Her defense, ballhandling abilities and experience make her another player Geno Auriemma can lean on when the team needs a spark. — Philippou

The little things define Lacie Hull’s game: a hand in the passing lane, a key defensive rebound, an accurate backdoor pass, a grinder approach to defense. If Hull is scoring, it’s a bonus, but Stanford wouldn’t win as much without her. — Voepel

With a team this deep, you have to be ready for anything, and Jump has been, even though her minutes fluctuate. She is the Cardinal’s top 3-point shooter (82) and fourth-leading scorer (9.3 PPG). She was their top scorer with 15 in Stanford’s tournament opener over Montana State. — Voepel

Robinson is the only non-transfer among the Cardinals’ seniors; the Kentucky native has spent her whole career at Louisville. Her specialties are defense and moving the ball in the offense. She has been on the ACC All-Defensive Team the past two seasons. — Voepel