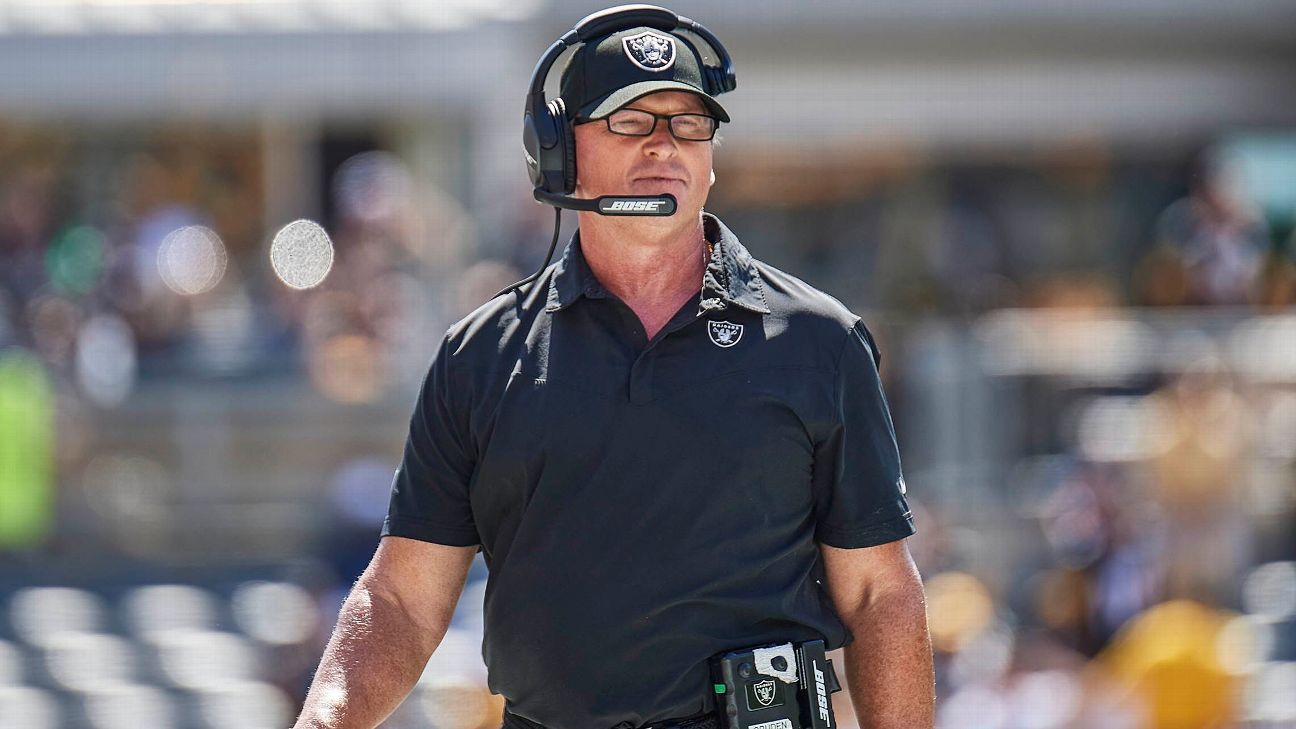 The NFL has found no other current team or league personnel to have sent emails containing racist, anti-gay or misogynistic language similar to messages written by Jon Gruden that led to his resignation as Las Vegas Raiders coach, a person familiar with the documents told The Associated Press on Friday.

The person said the league “did not identify other areas and other individuals it has to contact at club leadership or league leadership levels.” The person spoke on condition of anonymity because the league has not publicly released what is in the 650,000 emails the independent investigators collected during an investigation of sexual harassment and other workplace conditions at the Washington Football Team.

“The NFL did not identify any problems anywhere near what you saw with Jon Gruden,” the person said. The person did not address any other areas of potential issues found in the emails beyond similarities with Gruden’s comments.

Gruden resigned Monday as Raiders coach after the denigrating comments expressed in emails written during 2011-18 to then-Washington club executive Bruce Allen were reported. Gruden worked as an analyst for ESPN during those years before joining the Raiders in 2018.

“Our players deserve a full accounting of any other NFL misconduct, which is why we once again call for the league to release all of the emails from the Washington investigation,” Smith wrote. “Any evidence or knowledge that this has been suppressed must be brought to light.”

The NFL also has categorized comparisons of Gruden’s correspondences with Allen to those by top league counsel Jeff Pash as a mischaracterization.

The emails between Pash and Allen show Pash reassuring Allen on controversies involving the Washington franchise and discussing league issues and other topics, including politics, according to the New York Times and the Wall Street Journal.

The person said the league finds those emails “in a different category” from Gruden’s and “appropriate” as a part of Pash’s job. Pash has been a conduit between the NFL office and teams for years.

There were a number of topics Pash discussed with Allen in emails, but the NFL found the attorney had not been “too chummy” with the Washington team president, nor was there anything that “led to any sort of undue influence that resulted in any gains by the Washington Football Team,” the person said.

That franchise was docked $36 million in salary cap room in 2012 and ’13 by the league, with Pash heavily involved in the probe leading to that discipline.

The timeline of when the NFL was made aware of the content of the emails also has come into question. Such knowledge came toward the end of the investigation of the Washington franchise, with the investigating firm viewing the emails as beyond the scope of their probe.

When the league became aware of some emails potentially of concern, it began to review those. That led to the Gruden emails.

Confidentiality has been cited by the NFL and by the investigating firm in the Washington Football Team case for not publicly releasing specifics. The majority of those who participated in the investigation were promised they would remain anonymous. But the league certainly is upset that detailed emails to and from Allen have been leaked, though the only comments it has made have been on the content of Gruden’s emails.

“The league definitely is concerned about it, not happy what is viewed as confidential emails and part of confidential investigations show up in the newspaper,” the person said.

NFL Players Association chief DeMaurice Smith again called for the league to release every email from the investigation.

“Our players deserve a full accounting of any other NFL misconduct,” he said on Twitter, adding “any evidence or knowledge that this has been suppressed must be brought to light.”