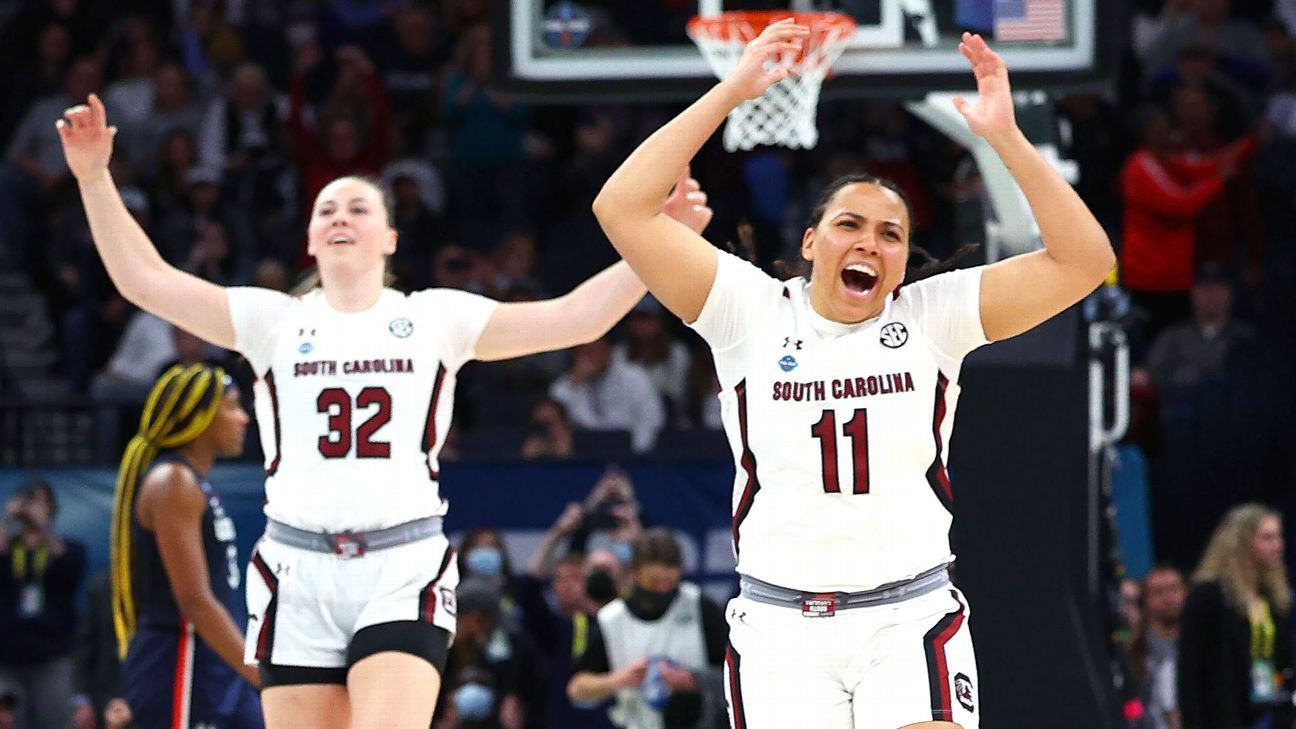 MINNEAPOLIS — One year after a heartbreaking loss in the Final Four to eventual champion Stanford, No. 1 seed South Carolina found redemption, earning the program’s second national championship with a 64-49 victory over 2-seed UConn on Sunday at Minneapolis’ Target Center.

South Carolina is also the 12th team to go wire-to-wire as No. 1 in the AP poll and win it all.

South Carolina’s 35 wins are the most in a single season in program history; seven of them were over national championship-winning coaches, and two were over UConn’s Geno Auriemma, as the Gamecocks had previously beaten the Huskies 73-57 on Nov. 22 in the Bahamas.

South Carolina coach Dawn Staley is also now 2-0 in NCAA national championship games after leading her squad past Mississippi State for the 2017 title.

After going 11-0 in his previous national championship appearances, Auriemma was handed his first loss in the title game.

The Huskies, whose 11 titles are tied for the most in Division I basketball, are still in search of their first title since taking home four straight from 2013-16. Their five straight NCAA tournaments without a championship is the longest the program has gone since earning its first title in 1995.

Henderson’s 3 22 seconds into Sunday’s game gave the Gamecocks a lead they wouldn’t relinquish.

South Carolina started hot, scoring 13 of the game’s first 15 points and jumping out to a 30-12 advantage early in the second quarter off a Henderson 3. UConn eventually settled in, using a 15-5 run to cut the deficit to as few as seven and then 35-27 entering halftime. Top-ranked 2021 recruit Azzi Fudd played just five minutes in the first half for UConn after dealing with a stomach bug heading into the game.

South Carolina got going early once more after the break, pulling back ahead by 16 midway through the third off a Cooke layup. Then the Huskies rattled off a 10-0 run, featuring their first 3s of the game, to make it a 43-37 affair. The Gamecocks scored the final three points of the frame, and six of the first eight of the fourth, to cushion their lead. Fudd’s and Bueckers’ 3s made it a 10-point game with 3:18 to play, but they wouldn’t be able to pull any closer.