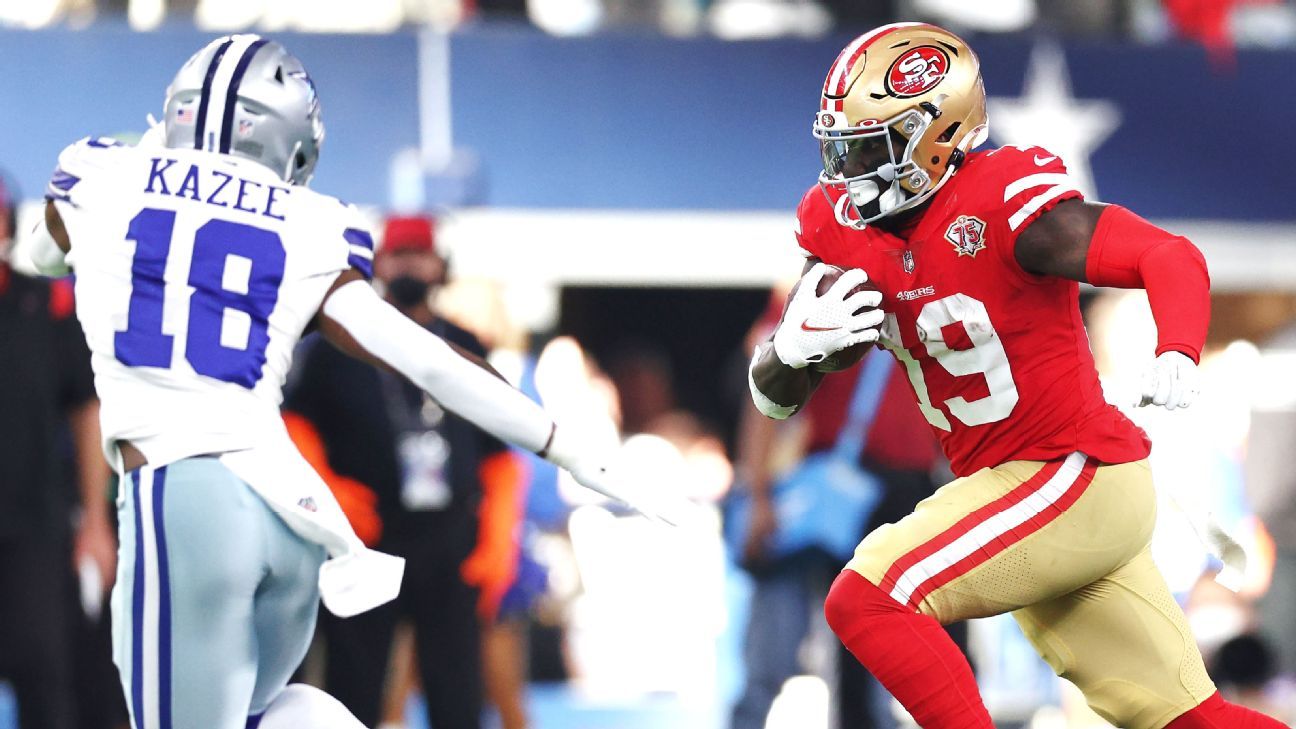 ARLINGTON, Texas — Nursing a 9-point lead in the third quarter, the San Francisco 49ers finally got the game’s first takeaway. They wasted no time making the Dallas Cowboys pay for the mistake.

After cornerback K’Waun Williams came up with an interception of Cowboys quarterback Dak Prescott at Dallas’ 26, Niners coach Kyle Shanahan did what he has done so many times this season, putting the ball in the hands of receiver Deebo Samuel out of the backfield.

Samuel took a handoff from quarterback Jimmy Garoppolo, looped behind him and sprinted to his right, looking for a hole. After he waited a beat, the bodies in front of him parted, and Samuel cut inside and raced untouched 26 yards for a touchdown. The touchdown put the 49ers up 23-7 with 5:50 left in the third quarter.

Including the regular season, it was Samuel’s ninth touchdown of the season when lined up in the backfield. He became the first receiver to lead his team in rushing touchdowns in the modern era with his eight in the regular season. The score was Samuel’s fourth rushing touchdown from 20-plus yards on the season, tied with running back Raheem Mostert (2019) for the most in a season by a Niner.

Samuel gained 22 yards over expectation on his 26-yard rushing TD. In the regular season, 46% of his rush yards were over expectation, second highest of any RB or WR with 50-plus rushes. — Nick Wagoner

ARLINGTON, Texas — Maybe it’s hyperbole to say the Dallas Cowboys‘ season was on the line on their first drive of the second quarter, trailing 13-0 to the San Francisco 49ers in a wild-card playoff game. But Dak Prescott and Amari Cooper made sure it ended in a good way for the home team.

Facing their first third-down play of the drive, Prescott floated a perfect 20-yard pass to the end zone for Cooper, who blew past cornerback K’Waun Williams to cut the 49ers’ lead to 13-7 with 5:19 left in the first half.

The Cowboys entered that drive with 7 yards on their first eight plays of the game, but offensive coordinator Kellen Moore went to the run game on the first five plays of the scoring drive. Ezekiel Elliott picked up 10 yards, Tony Pollard picked up 9 and CeeDee Lamb picked up 5. That calmed the Cowboys down and put them in scoring position, then Prescott and Cooper connected for a touchdown for the second time in three playoff games together.

According to NFL Next Gen Stats, it was Cooper’s second receiving touchdown from the slot this season. It was also the 14th straight touchdown the Cowboys have scored on red zone possessions. — Todd Archer

Amari Cooper wins the 1-on-1 matchup for SIX. #DallasCowboys #SuperWildCard