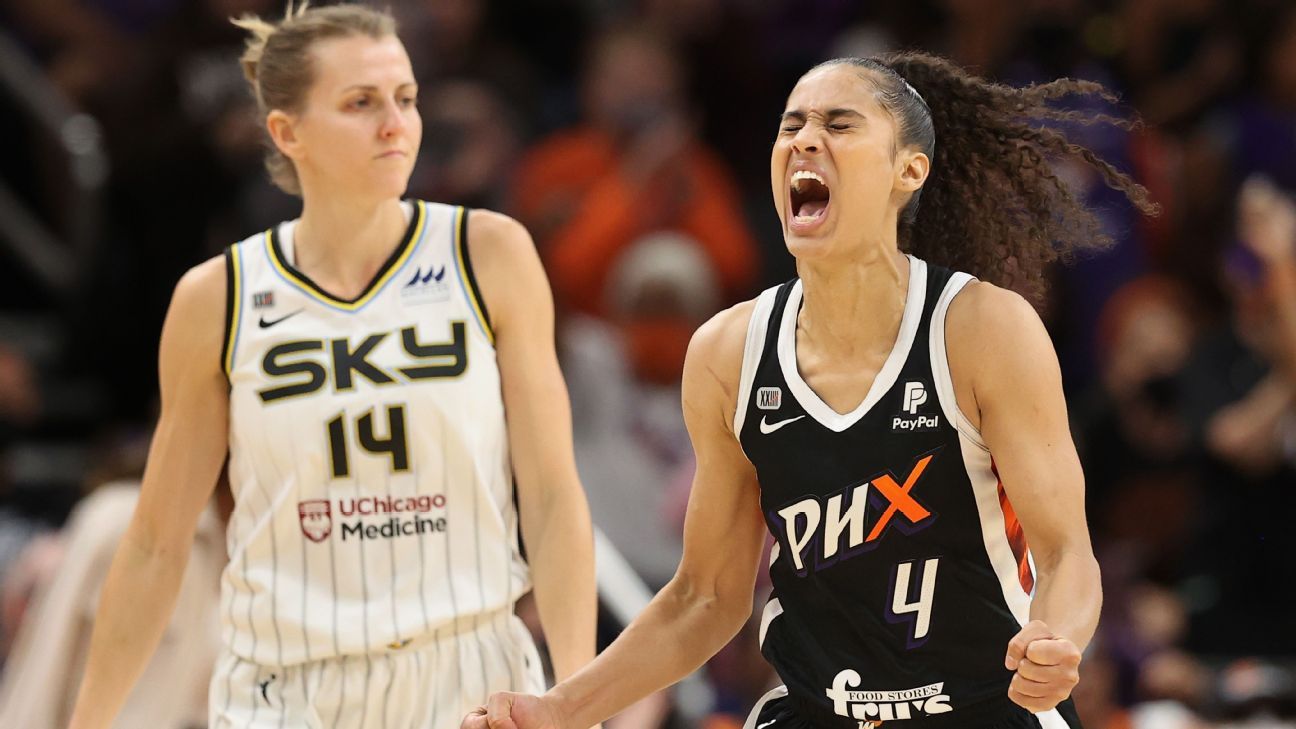 PHOENIX — In the closing seconds of overtime, with the Phoenix Mercury clinging to a three-point lead, Skyler Diggins-Smith glanced toward Diana Taurasi, prepared to pass the ball to her teammate. But Taurasi shook her head to say, “Keep it.”

That was all Diggins-Smith needed.

She drove to the basket for a layup with 12.8 seconds left in overtime, giving the Mercury their final five-point cushion in a thrilling 91-86 Game 2 victory Wednesday in the 2021 WNBA Finals. It evened the series with the Chicago Sky, who will host the next two games in the series. Game 3 is Friday (9 p.m. ET, ESPN2/ESPN App).

“I had about five or seven (shots) that I freaking should have made,” said Diggins-Smith, who shot 5-for-18 from the field Wednesday. “Missed some makeable layups, but I knew I would have another chance, and my team told me that, too: ‘Just keep going, keep trying to be aggressive, get downhill.'”

Diggins-Smith finished with 13 points, 12 assists and seven rebounds in a must-have game for the Mercury. Had they lost, they would be headed to a sold-out Wintrust Arena in Chicago down 2-0. Instead, they battled back to earn the tie in regulation and then executed better than the Sky in overtime.

Center Brittney Griner was the workhorse star Wednesday for the Mercury, with 29 points and nine rebounds. Taurasi struggled to find her offense at times before becoming money, as usual, late and finishing with 20 points. Sophie Cunningham, who had been out with a calf strain since getting injured in Game 3 of the semifinals, returned to action with nine points, five rebounds and her usual radiant energy. Brianna Turner was the heart of the defense, and Shey Peddy scored 10 points off the bench.

But Diggins-Smith was a crucial part of sending 13,685 Mercury fans at Footprint Center home happy. In her second season in Phoenix and eighth WNBA season overall, she wanted to come to the Mercury for games like this.

“Skylar would probably say, ‘I’ve missed too many shots,’ but I thought with her ability to facilitate and just give us some easy baskets … we needed that,” Mercury coach Sandy Brondello said. “It’s not very often you look and Diana has zero [assists], but that’s why they complement each other.

“Dee is a 3-point shooter, a scorer, she’s a great passer as well, but [Chicago] put a lot of pressure on her. So we put her in being more of a screener, and put the ball more in Sky’s hand. And she made some pretty good decisions.”

Diggins-Smith has been doing that a long time, going back to her days growing up in South Bend, Indiana, and then playing for Notre Dame. When the Finals return to Chicago on Friday, she won’t be far from her hometown. She brought the swagger to the Irish, and she has brought an extra level of intensity to the Mercury.

Skylar Diggins-Smith shows no fear and drives on Courtney Vandersloot to extend the Mercury’s lead.

“I’ve been around this game a long time, and there’s not too many people that compete the way Skylar competes every single day,” Taurasi said. “We’ve gotten to work out (together) for two offseasons. Every day is the same. Every day is Game 5 for her.

“That’s kind of ignited my passion for the game a little bit. What she did today was Skylar taking it to a different level. The way she just impacted the game every single possession, probably one of the best games I’ve ever seen her play.”

Earlier this year, Diggins-Smith made her first Olympic team and won her first gold medal, and now she is appearing in her first WNBA Finals. She turned 31 in August during the Summer Games in Tokyo, and said she has been looking to Taurasi and Griner for guidance as they already had Olympic and Finals experience.

“You have to compartmentalize a little bit,” Diggins-Smith said of the joys and challenges of this season and the Olympics. “You keep focus on, ‘What do I have to get done today?’

“I know to help this team, I don’t necessarily have to have 20 points. I can do other things: going after 50/50 balls, getting in the lane and creating opportunities. Those are things that can make a big difference in games like this.”

As for the “edge” she always competes with, Diggins-Smith laughed and said it’s out of necessity. And it’s just what the Mercury needed.