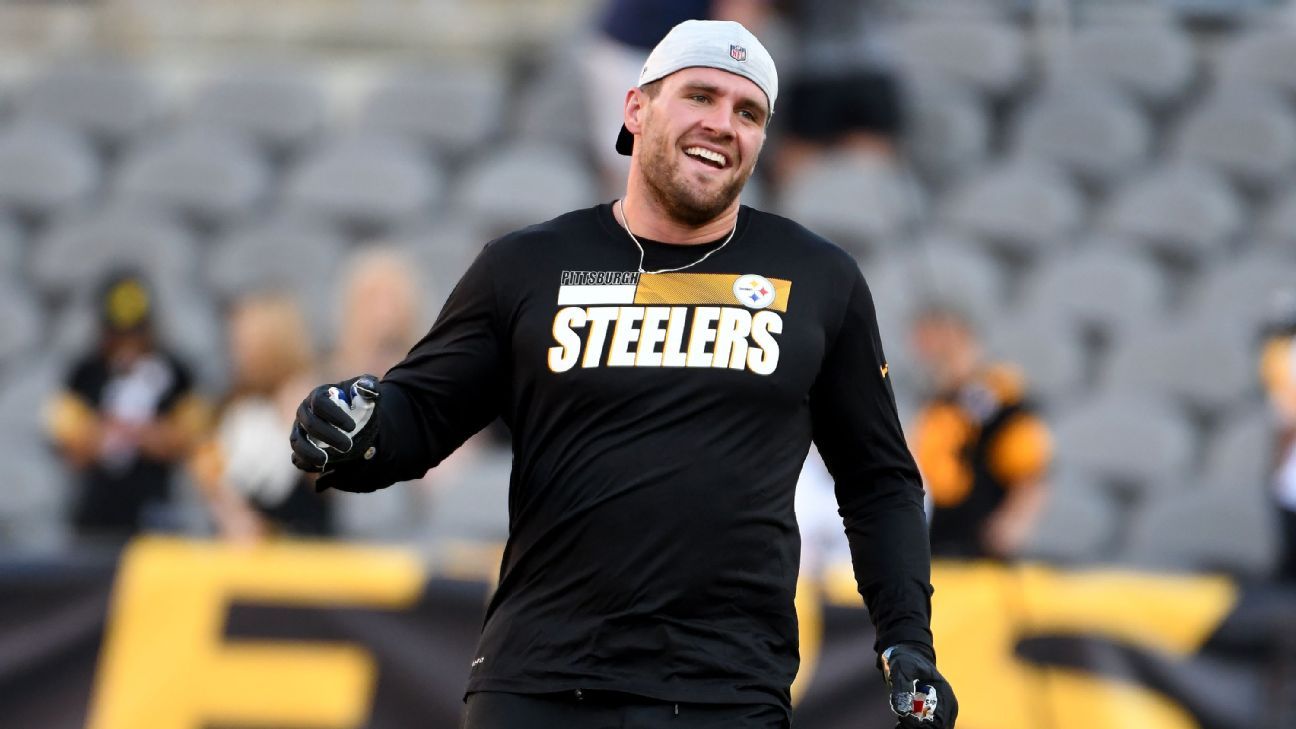 PITTSBURGH — After a contract negotiation that lasted throughout training camp and into the first week of the regular season, the Pittsburgh Steelers and outside linebacker T.J. Watt broke from their traditions to come to terms on a megadeal on Thursday.

Watt overruled his agents, who believed they could get more money on Thursday, marching into the office of Steelers president Art Rooney II and telling him they had a deal, according to Schefter. Watt then excused himself and announced he had to go work out, Schefter reports.

If it’s ok with Yinz, I’d like to stay a while!! LETS GO PITTSBURGH!!!! pic.twitter.com/itjnF7XNLd

“This is a guy who was more than deserving of this contract,” Steelers defensive captain Cam Heyward told ESPN on Thursday afternoon. “It’s great to know his future is here in Pittsburgh.”

Watt’s deal also outpaces that of Chicago Bears outside linebacker Khalil Mack, who was previously the highest-paid player at the position with a six-year, $141 million contract signed in 2018. Mack’s deal averages $23.5 million average annually and has $90 million guaranteed.

“I could cry,” cornerback Joe Haden tweeted, reacting to the Watt news. “U deserve every penny!! I got to Pittsburgh your rookie year and you have done nothing but display professionalism and play at the highest level in the league!!”

With the Steelers’ self-imposed contract deadline of the season opener nearing, negotiations pushed into Week 1 as the two sides worked to find common ground on the contract’s guarantees.

The Steelers usually guarantee only the signing bonus, but not much else. Throughout the life of the contract, though, the Steelers will typically restructure and give more guaranteed money and security later, rather than up front.

Watt’s case, though, shattered that mold.

Previously, the most guaranteed money given out on a contract by the Steelers was Ben Roethlisberger‘s current $67.5 million guaranteed, according to ESPN Stats & Information research.

Watt’s teammates made a public push for the edge rusher to get a megadeal throughout the week. Both Roethlisberger and Heyward advocated for Watt to get whatever amount he wanted.

“He’s arguably the best football player in the game right now, not just on defense, just in general,” Roethlisberger said Wednesday. “I’ve been through negotiations here with contracts. One of the reasons I took less money was for guys like him to get paid, and he needs to get paid.

“He deserves every penny that he wants and asks for. T.J. Watt is that guy that should get whatever he wants.”

Watt isn’t the first member of his family to make record-setting money. Older brother J.J. Watt, now with the Arizona Cardinals, signed a six-year, $100 million extension with the Houston Texans in 2014. J.J.’s $51.8 million guaranteed and $16.6 million average were both records for an NFL defensive player at the time.

.@_TJWatt should I send those outstanding IOU’s to your accountant or do you want to just Venmo me?

Watt finished second to the Los Angeles Rams‘ Aaron Donald in Defensive Player of the Year voting after his 15-sack campaign in 2020. He also added an interception and two forced fumbles to go with 53 total tackles.

Watt has racked up double-digit sacks in each season beginning in 2018, subsequently recording 13, 14.5 and 15 sacks. His two forced fumbles in 2020 were his fewest since recording just one his rookie season. He had six in 2018 and eight — along with four fumble recoveries — in 2019. He finished third in Defensive Player of the Year voting to New England Patriots cornerback Stephon Gilmore and Arizona linebacker Chandler Jones in 2019.

“T.J. is visiting from another planet, to be quite honest with you,” coach Mike Tomlin said during the 2020 season. “He has freakishly unique talent coupled with freakishly unique work habits and mindset, and it produces what you guys witness every week, which in my opinion is Defensive Player of the Year quality.”

The Steelers parted ways with fellow outside linebacker Bud Dupree in free agency, signaling that they were moving forward with Watt as the cornerstone of the defense and planned to sign him to a monster deal. This year, he’ll anchor the left side of the pass rush and be part of a rotation that includes former Chargers outside linebacker Melvin Ingram and second-year edge rusher Alex Highsmith.

The Steelers dealt with a tight cap in 2020 and 2021 in part because of Roethlisberger’s contract, but they restructured his deal and released longtime right guard David DeCastro before camp, freeing up space to sign veteran free agents and ink Watt to a megadeal.

After this season, though, the Steelers are projected to be in a much different cap situation with Roethlisberger’s contract voiding after the season. That gave them the space to sign Watt to his deal.

Though he attended every practice, Watt didn’t fully participate in training camp while the two sides negotiated the blockbuster payday. Instead, Watt worked individually with strength and conditioning coaches on the sideline at Heinz Field during team periods.

After holding-in for the preseason, Watt rejoined the team periods at practice on Wednesday. He greeted his teammates on the field with celebratory fist bumps before their first snap.

“T.J.’s a professional,” said inside linebacker Joe Schobert, who played with Watt at Wisconsin. “I trained with him in the offseason back in Waukesha [Wisconsin]. He takes the job extremely seriously. … Put him in parking lot, wherever. He’s going to be ready to play a football game.”

Speaking to the media this week prior to Watt finalizing his extension, Tomlin and Butler each expressed optimism that Watt would play in Sunday’s season opener.

With the deal now completed, Watt will almost certainly make his debut as the NFL’s highest-paid defensive player alongside the rest of his team against the Buffalo Bills.