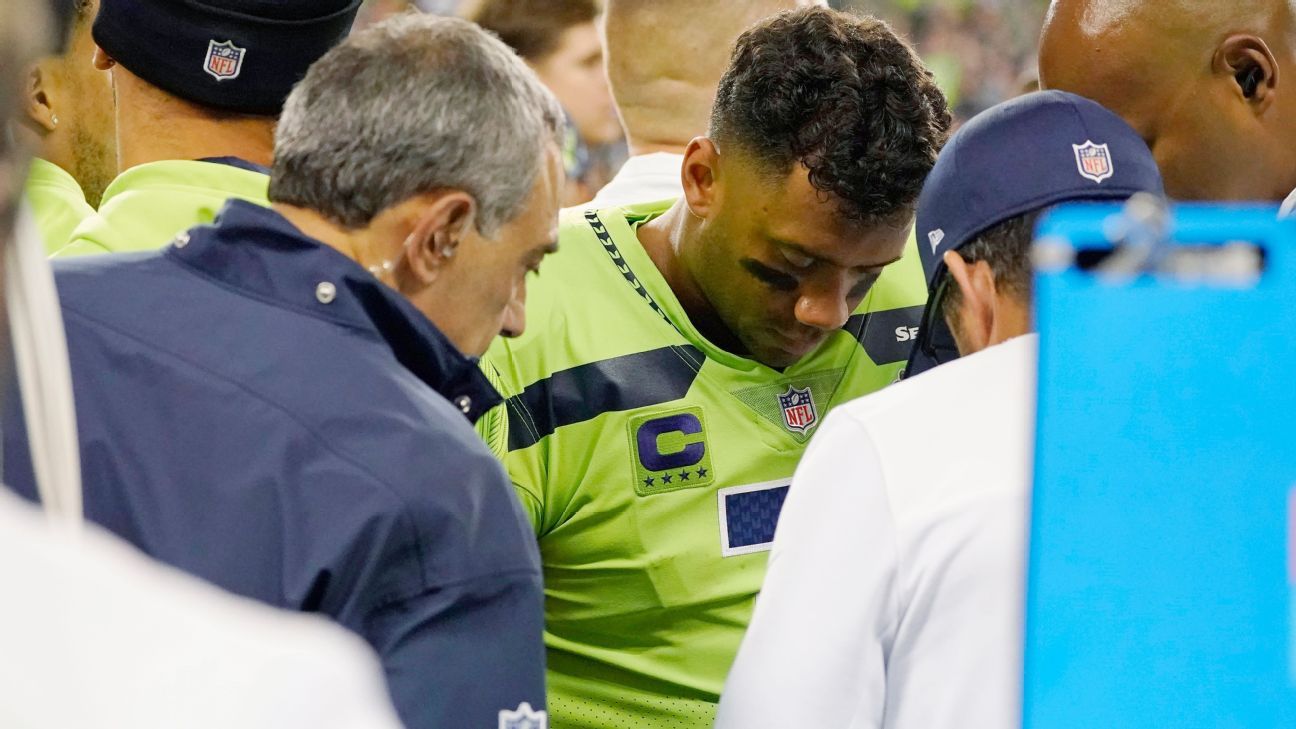 The Seattle Seahawks are bracing for quarterback Russell Wilson to miss at least a month and possibly up to eight weeks with a ruptured tendon in the middle finger of his right hand, sources tell ESPN’s Jeremy Fowler.

He flew from Seattle to Los Angeles earlier in the day to meet with a hand specialist after injuring the middle finger on his throwing hand Thursday night in a loss to the Los Angeles Rams.

The decision to have surgery was made with Wilson’s long-term health in mind, sources told Fowler. It will sideline him for the first time in his NFL career when the Seahawks play the Pittsburgh Steelers next Sunday night, ending his streak of 149 consecutive starts.

And it will force the Seahawks (2-3) – already two losses behind the Rams and Arizona Cardinals in the NFC West — to turn to Geno Smith to keep their playoff hopes alive.

Speaking with reporters and on his weekly radio show Friday morning, coach Pete Carroll said he wouldn’t know how much time Wilson may have to miss until he met with the hand specialist, nor would he discuss the results of X-rays Wilson had postgame.

Wilson’s streak of 149 consecutive starts is the longest by an active quarterback. According to Elias Sports Bureau, only Peyton Manning (208) has started more consecutive games to begin his career among quarterbacks since the 1970 merger.

Wilson has played through some notable injuries, including a sprained ankle and sprained MCL in 2016. But Carroll said “everyone was together” Thursday night in the decision to insert Smith once it became clear that Wilson couldn’t grip the ball well enough to throw it. Carroll was adamant Friday that the issue is not one of pain management.

“Nobody should question his toughness,” he said. “Nobody should question his resolve. If he could have thrown a football and held onto it, he would have done it. Anybody that says otherwise doesn’t know what they’re talking about. So you can deal with all kinds of stuff with your hands and you can still throw the football, and he tried last night and did not have … the control of the ball. So if he could have, he would have.”

Wilson was injured in the third quarter when his hand banged against Aaron Donald‘s arm just as he released a deep throw. The broadcast showed the tip of Wilson’s finger unnaturally bent downward. He was examined for several minutes on the sideline by the Seahawks’ team doctor and members of their athletic training staff, who watched Wilson grip a football and then bandaged his finger.

Wilson returned for one series, throwing a short pass on a three-and-out, then was replaced by Smith for the remainder of the game.

Smith gave Seattle hope with a touchdown pass to DK Metcalf, capping a 98-yard drive on which he went 5 for 5. He was intercepted on a throw to Tyler Lockett, who fell down, to all but seal the Rams’ win. Smith finished 10 of 17 for 132 yards.

“I thought Geno did a marvelous job last night,” Carroll said. “Geno’s been practicing with us for all this time and waiting for his opportunity if called upon. The patience that he’s show with us and to stay with it and his relationship with Russ and the coaches, he’s been impeccable. And when he went out, he executed like he can. He’s a very talented football player. He’s got a great arm, he’s got great sense and he knows the system really well.”

The Seahawks’ defense, already ranked last in the NFL heading into Week 5, allowed 476 yards to the Rams.

“I totally trust that Geno can do this and I think you saw it last night in a really difficult situation – hurry-up, all that kind of stuff, he was really good at it,” Carroll said. “He really understands the system so we’ll be able to stay with the preparation and that’ll help everybody. Geno makes guys around him feel confident and feel comfortable and I thought that was a great showing.”

The 30-year-old Smith is in his third season with Seattle. Before Thursday, his only action with the Seahawks was in mop-up duty. His last start came in 2017 with the New York Giants.

Carroll said Smith has the makeup required to excel as a backup quarterback despite rarely getting reps.

“It’s not the makeup that Geno would like to be proud of – that I’m really good at backing up – because everyone wants to be a great starter and I’ve always talked to him like that, that he is and that’s what he will be when the time comes,” Carroll said. “So now he’s going to get a chance and I’m thrilled for him.”