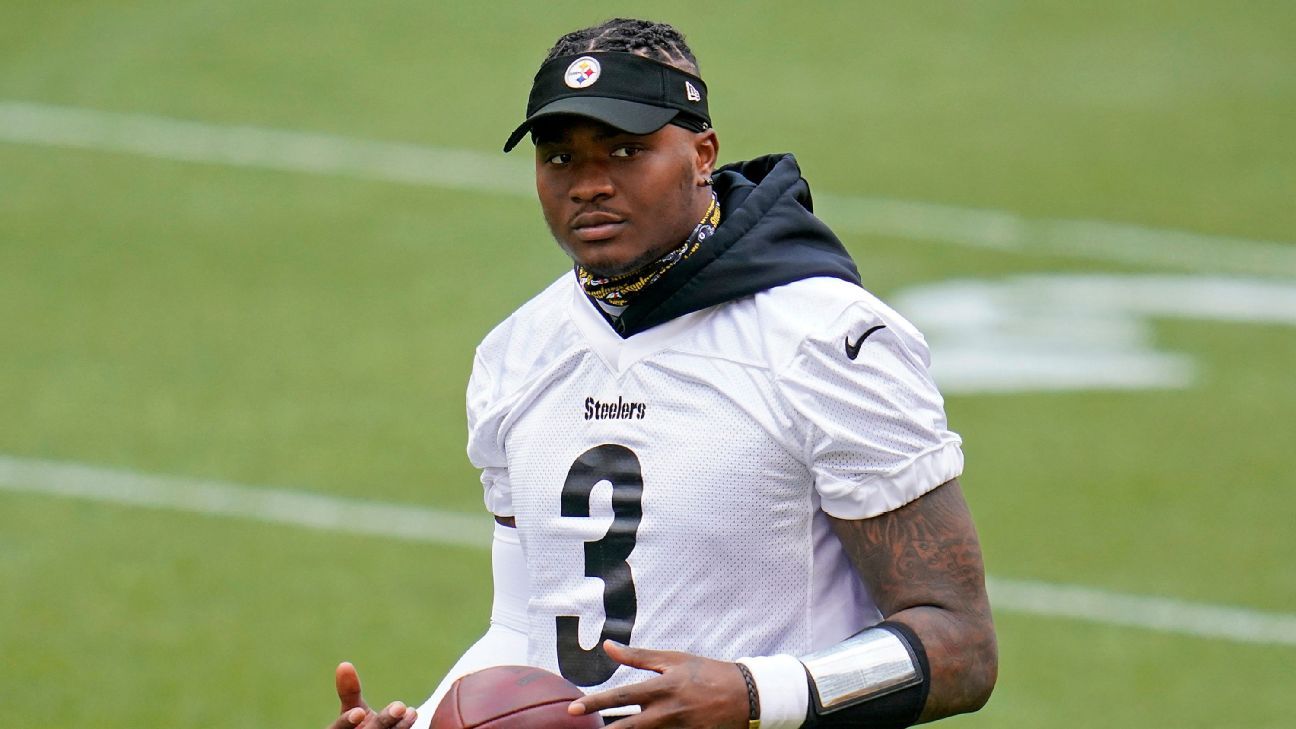 Pittsburgh Steelers quarterback Dwayne Haskins died early Saturday morning after he was struck by a dump truck while he was walking on a South Florida highway. Haskins was 24 years old.

“He was attempting to cross the westbound lanes of Interstate 595 when there was oncoming traffic,” Miranda said in an emailed statement.

She didn’t say why Haskins was on the highway near Fort Lauderdale at the time. The accident caused the highway to be shut down for several hours, and Miranda said it’s “an open traffic homicide investigation.”

Haskins was training in South Florida with other Steelers quarterbacks, running backs and wide receivers.

“I am devastated and at a loss for words with the unfortunate passing of Dwayne Haskins,” Steelers coach Mike Tomlin said in a statement. “He quickly became part of our Steelers family upon his arrival in Pittsburgh and was one of our hardest workers, both on the field and in our community. Dwayne was a great teammate, but even more so a tremendous friend to so many. I am truly heartbroken.

“Our thoughts and prayers are with his wife, Kalabrya, and his entire family during this difficult time.”

After a standout 2018 season at Ohio State, Haskins was selected 15th overall by the Washington Commanders in the 2019 draft.

“We are devastated to hear the news of the tragic passing of Dwayne Haskins Jr.,” Commanders owners Daniel and Tanya Snyder said in a statement. “He was a young man with a tremendous amount of potential who had infectious personality. To say we are heartbroken is an understatement. Our hearts and prayers are with the members of Dwayne’s family and all of those who knew him and loved him.”

“Dwayne was a talented young man who had a long life ahead of him,” Commanders coach Ron Rivera said in a statement. “This is a very sad time and I am honestly at a loss for words. I know I speak for the rest of our team in saying he will be sorely missed. Our entire team is sending our heartfelt condolences and thoughts and prayers to the Haskins family at this time.”

Haskins played in 15 games over two seasons with Washington, compiling a Total QBR of 29.4 — the league average during that time was 63.5. He threw 12 touchdown passes to 14 interceptions.

Haskins’ time in Washington started somewhat controversially, as the scouts and coaches lobbied against drafting him with the 15th pick — but Snyder wanted him. Haskins was a big name locally, having starred for three seasons at Bullis High School in Potomac, Maryland.

Haskins started seven games in his rookie year and the first four games the following season, but was benched after a 30-10 loss to Baltimore. Haskins was released by Washington later that season and went unclaimed on waivers. He signed a reserve/future contract with Pittsburgh in January 2021.

Saying he was humbled by the decision, Haskins stressed he was eager to work hard and absorb as much as he could from Ben Roethlisberger and Mason Rudolph. He made the roster as the third-stringer but dressed only once, serving as the backup in a tie with Detroit after Roethlisberger was placed into the COVID-19 protocol the night before the game.

Roethlisberger remembered Haskins in a tweet, writing, “I only had the privilege to know D-Hask for a short time, but in that time I got to meet a young man that didn’t seem to ever have a bad day. He came to work everyday with a smile on his face and energy and love in his heart. … Wish we ha more time together on this earth, but I will cherish the time and the laughs we had!”

In response to the news of Haskins’ death, Rudolph simply tweeted, “Devastated.”

The world lost a great person today. When Dwayne first walked into the locker room I could tell he was an upbeat guy. He was always making people smile, never taking life for granted. His impact on me will last a forever.

“I spent your final moments with you and I can’t help but think about how selfless you were in those moments,” Claypool wrote in his tweet. “All you cared about was making sure that everyone around you was okay and I can’t thank you enough for that. You are what I strive to be.”

Tomlin and general manager Kevin Colbert both praised Haskins for his improvement since joining the team, and the Steelers re-signed him to a one-year deal as a restricted free agent in March. He was expected to compete with Rudolph and Mitch Trubisky for a spot.

“We’re excited to see what Dwayne can provide, either from competition, or maybe he evolves as a starter,” Colbert said in January.

Haskins had his greatest on-field success at Ohio State. After spending his first two seasons behind J.T. Barrett, Haskins beat out Joe Burrow to be the Buckeyes’ starting quarterback going into the 2018-19 season.

The record-setting year led to Haskins being named a Heisman Trophy finalist and a third-team AP All-American.

In his final game as a Buckeye, Haskins threw three touchdown passes and for 251 yards in a Rose Bowl victory over Washington.

“The loss of Dwayne is beyond tragic and extremely difficult to process,” current Ohio State coach Ryan Day, who was Haskins’ position coach as well as the Buckeyes’ acting head coach in 2018, posted to Twitter. “For those who knew him closely, he was much more than a great football player. He had a giant heart, old soul and an infectious smile. The Ohio State community and our entire football program are heartbroken.”

The school also released a statement: “The Ohio State Department of Athletics is terribly saddened to learn the death of Dwayne Haskins Saturday morning. We are thinking of the entire Haskins family during this most difficult time. Our prayers are with the family, and with his current and former teammates, coaches, friends and relatives.”

“Heartbroken to hear of the loss of Dwayne Haskins Jr.,” former Buckeyes coach Urban Meyer tweeted Saturday. “My thoughts and prayers go out to his incredible family. One of the greatest QB’s in Ohio State history, but an even better son, teammate, and friend. God Bless!!”

The Pittsburgh Penguins held a moment of silence in honor of Haskins before their Saturday afternoon game against the Washington Capitals.

Information from ESPN’s John Keim and The Associated Press was used in this report.