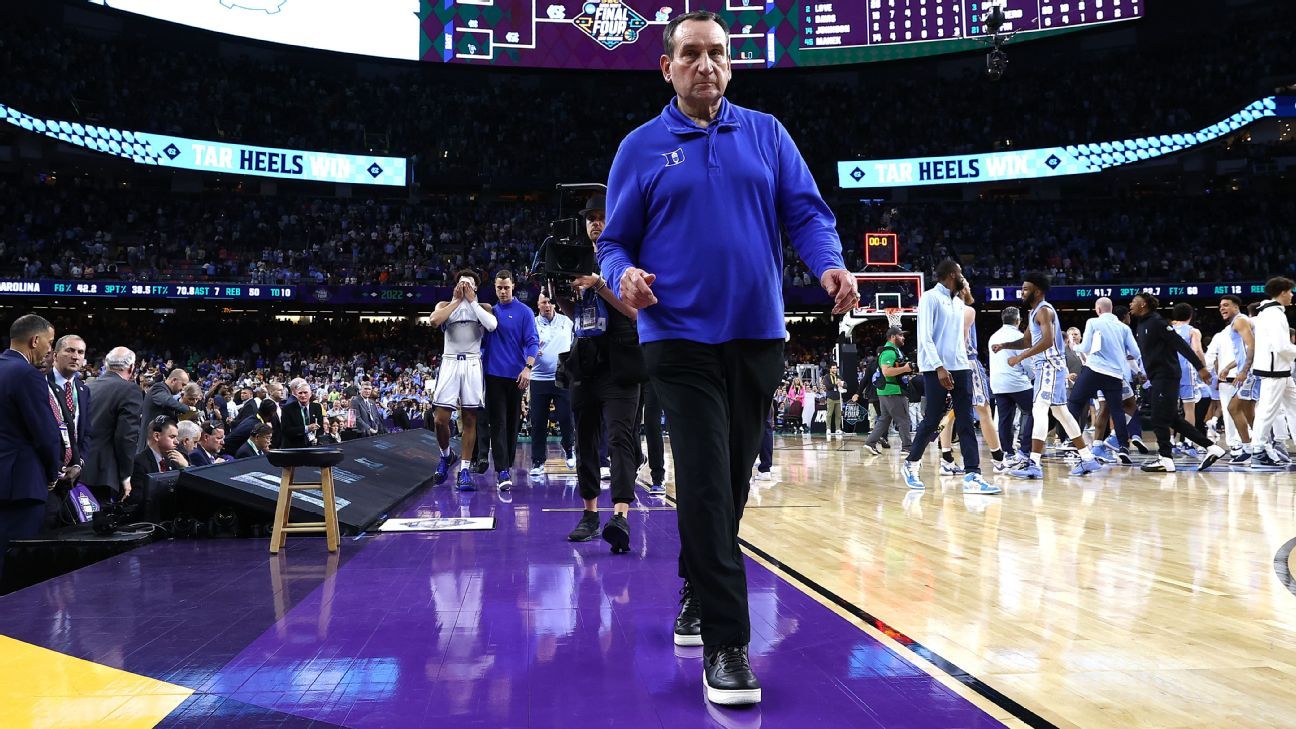 NEW ORLEANS — As Mike Krzyzewski limped off the Superdome court at 10:07 p.m. local time Saturday night, he clasped the left hand of his wife, Mickie, with his right hand.

As they reached the threshold where the exit of the arena floor ends and the tunnel to the locker room begins, Krzyzewski broke stride. He stopped to console freshman guard Trevor Keels, hugging the star Duke freshman as he wept openly. That moment unfolded in front of a Final Four mural painted on the wall that provided the backdrop of both the scene and the night for Duke and Krzyzewski: The Road Ends Here.

Krzyzewski’s final loss as Duke’s head coach sent him into retirement with a thunderclap that somehow combined both the end of Krzyzewski’s Hall of Fame career with one of the best Final Four games the sport has ever seen. The looming history, stakes and tension from Duke bowing to rival North Carolina, 81-77, all converged for one of the most compelling showcases the sport has ever seen.

After 1,202 wins, 13 Final Fours and a career that redefined the bounds of coaching success in college basketball, Krzyzewski’s career ended amid a frenzied loss in a storied game against his bitter rival. The road ended here, one exit short of a shot at ecstasy, with a jarring screech of brakes and the accompanying blender of emotion.

Distilling the confluence of history that unfolded on Saturday night is tricky. Not even noted Carolina bard Thomas Wolfe could have crafted a plot line where first-year UNC coach Hubert Davis bested 42-year Duke coach Krzyzewski in a game that will resonate for generations as a dueling coda for both programs. All of it unfolded amid the programs’ first-ever NCAA tournament game after 257 meetings and a century of competition.

Along with the stakes, the stage and the decades of animosity fostered in this rivalry, the victory also delivered Davis’ second indelible win over his rival in the last four weeks. He also spoiled Krzyzewski’s final game at Cameron Indoor Stadium with an unflinching performance that foreshadowed the cool-hand execution the Tar Heels would hallmark throughout this tournament.

On Saturday night, Krzyzewski’s career hung in the balance through a Dramamine-inducing 12 ties, 18 lead changes and Duke ultimately squandering a seven-point second-half lead. It played out amid a New Orleans-worthy bacchanal feel, as referee whistles couldn’t be heard courtside and a relentless throaty din provided the soundtrack. Krzyzewski himself pointed out that the crowd of 70,602 stood for most of the game.

Even in defeat, Krzyzewski found an appreciation of the caliber of game.

“I’ll be fine,” he said. “I’ve been blessed to be in the arena. And when you’re in the arena, you’re either going to come out feeling great or you’re going to feel agony, but you always will feel great about being in the arena.

As the game unfolded and leads kept changing, the players exchanged dynamic shot-making — Brady Manek corner parabolas followed by Paolo Banchero bull charges in the lane and capped by a flourish of Caleb Love scoring six points to seal the game in the final 25 seconds. It finished as the rare collegiate moment where the game exceeded outsized expectations, a seminal moment for a sport in need of a jump start.

In the end, Krzyzewski veered away from his own story line to shift the focus to the players. It was a seemingly well-intentioned plan, as the specter of retirement loomed larger than any story in college basketball this season, perhaps in this generation. “I’m not thinking about my career right now,” he said to an audience of media that was myopically focused on the topic.

In re-directing the attention of the moment to an attempt to uplift his devastated players, Krzyzewski did offer a pinch of insight into his psyche. It included a sincere appreciation to compete in moments like this.

“If I was in the arena alone, I would always come out with agony,” he said. “So whenever I’ve gone into the arena, I’ve brought these guys or a U.S. team, or whatever.

“So as a coach, you are allowed to go into that arena with amazing competitors. People who want to achieve at the highest level. And if you can teach them to achieve together at that highest level, then you come out of there in good shape.”

This last appearance in the arena included the type of scenes that accompany uncomfortable exits from big stages. There were the cocoons of media tracking every step of Krzyzewski around the arena, paying attention to every step more than a Kardashian in Hollywood.

The locker rooms of Duke and UNC were awkwardly positioned across the hall from each other in the arena tunnels. That meant the distinct juxtaposition of UNC’s Manek and RJ Davis bounding down the hall arm-in-arm, as if auditioning for a buddy movie, amid the pensive Duke supporters mourning the end of a season and an era.

Perhaps the most jarring scene came from former Suns owner and longtime USA Basketball managing director Jerry Colangelo, who wept in the hallway when stopped to discuss with ESPN the end of his friend’s career. “It’s not the way he wanted it to end, and the same with me,” Colangelo said, his voice quivering. “I thought it was going to go on forever. It had the makings of a double-overtime, incredible last-second shot.

“It was two really good teams. I told him a couple nights ago, ‘You don’t have to win anything more. The story has already been written.’ But I wanted…” Colangelo’s voice trailed off, and he politely ended the interview and walked away. The takeover of emotion underscored the kaleidoscope of joy, finality, history, appreciation and heartbreak that flowed through the entrails of the arena on Saturday night.

Colangelo’s desire for his friend to go out on top mimicked the common sentiment around the country, as Krzyzewski potentially winning his last dance provided the type of red meat story line that would have given Monday night the billing as one of the most anticipated NCAA title games in history. Perhaps the highest compliment of the breadth of Coach K’s career is that an NCAA final featuring Kanas and North Carolina — both of which bleed different hues of fluorescent blue — will be viewed as a disappointment in terms of ratings and the caliber of spectacle.

Considering that Krzyzewski’s time at Duke stretches back to Jimmy Carter’s presidency, he’s had thousands of at bats in the arena. And his 76 percent winning percentage at Duke has assured him an etching on the sport’s Mount Rushmore.

LaPhonso Ellis and Seth Greenberg shed some light on UNC’s thrilling win over Duke in the NCAA tournament.

But that twinge of regret that Colangelo expressed late Saturday was a verbalization of the pall cast around the Duke program. There was a distinct sense of a golden opportunity lost, as Duke had the game’s most talented player (Paolo Banchero), a superior roster and was favored by four points. Duke was the betting favorite to leave New Orleans with the title, but got outplayed in the final 90 seconds.

Krzyzewski leaves college basketball with five national titles, more than any coach not named John Wooden. But there will be some career twilight regret, as Krzyzewski could have delivered — and some could argue should have delivered — title No. 6 in recent years. This Duke team didn’t have the same talent advantage of the Zion Williamson-led team in 2019 that lost in the Elite Eight to a relatively pedestrian Michigan State team.

Krzyzewski’s last title game in 2015, and all the subsequent one-and-done reloads mostly kept Duke in the conversation atop the sport — with last year’s 13-11 the notable exception — but ultimately failed to deliver the biggest prize.

Krzyzewski accidentally encapsulated the moment, amid the dim lights and drab slate color schemes of the Superdome’s bowels. As he hobbled onto a golf cart after the final official press conference of his career, he offered a suggestion that doubled as a suggestion for a more aesthetic ending.

“Maybe you can all,” he said, “superimpose a sunset.”