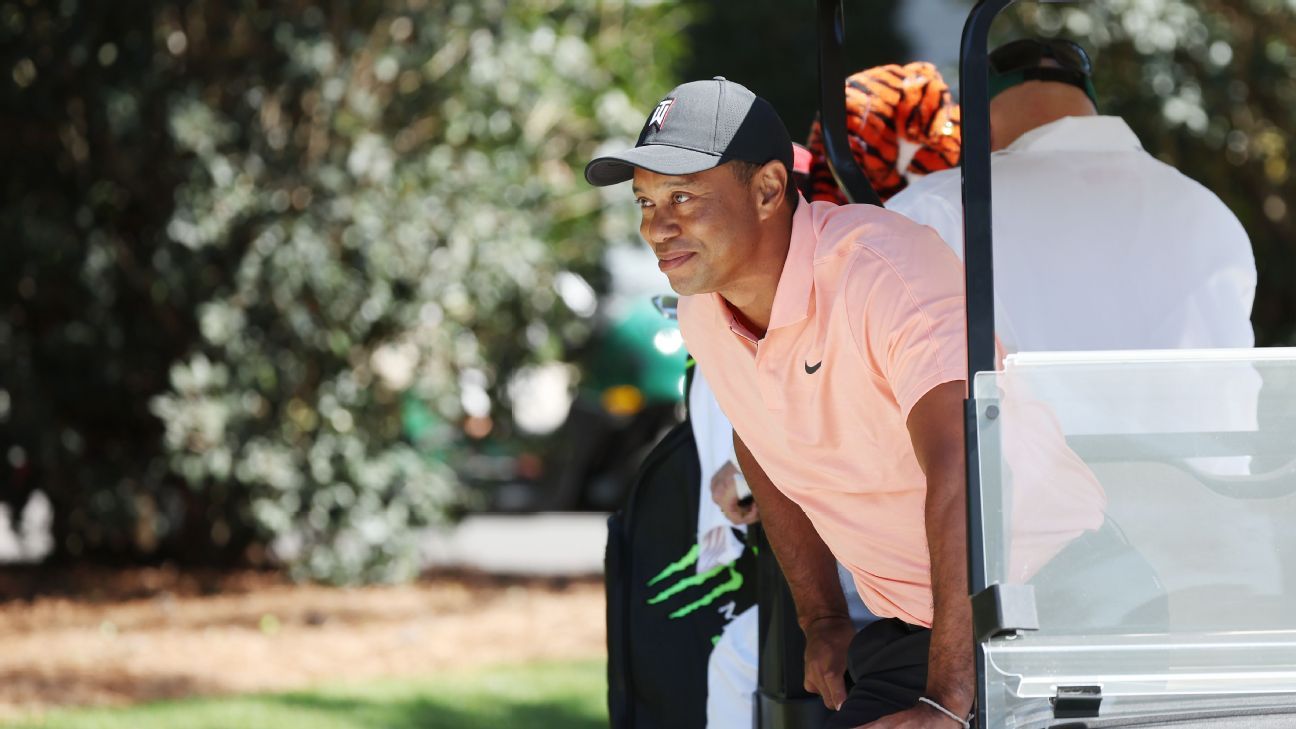 Tiger Woods wasn’t ready to officially say on Sunday that he’ll play in the 86th Masters, which is scheduled to begin Thursday at Augusta National Golf Club. But in a statement on Twitter, Woods did say that he would be arriving here Sunday to continue practicing and preparing to play. Later Sunday, he showed up at Augusta National to get some practice in.

Woods, a five-time Masters champion, said it will be a “game-time decision.” It would be his first appearance in a regular PGA Tour event in more than 17 months, after he was seriously injured in a car wreck outside Los Angeles on Feb. 23, 2021. He said doctors nearly had to amputate his right leg.

A little after 1:30 p.m. ET, Woods arrived on the practice putting green at Augusta National. He rolled a few there, under the watchful eye of friend and associate Rob McNamara. Then he moved on to the chipping area, with McNamara and caddie Joe LaCava at his side. Then it was on to some full swings.

The plan is for Woods to play nine holes; he went out and played the second nine Sunday afternoon and Monday he is expected to go around the first nine.

Patrons cheering and flocking to cram around the putting green ⛳️

And it’s only Monday at @TheMasters 👀

As he did Sunday, Woods showed up in FootJoy golf shoes. This time, he went with a white pair.

What the players are saying

The interview room at the Masters was up and running on Monday. Guess who was the topic of conversation?

Here’s what other players had to say about Woods and his possible return this week:

Billy Horschel: “With everything he’s gone through, with all the injuries and with all the personal stuff, he’s always — he still has that drive and that fire within him to still play golf. I was talking to a good friend of mine, Mark Noble, he plays for West Ham Football Club over in England, a team I support, and we were FaceTiming each other last night and we were saying, here’s a guy who’s made butt-loads of money. He’s got more money than anyone would need in your life, and after everything he’s gone through with the back surgery, before the accident, and now with the car accident coming back, he could have said, you know what, I’ve done a lot in this game, I don’t need to do anything more, but it just shows you how much he loves the game of golf, how much he loves being out here, and how much fire is still within him to play.

“To see him hitting golf balls at Augusta at the Masters, getting ready to play, I don’t know if he’s playing, I don’t know that answer, but to me if I was in his shoes, I wouldn’t be doing everything that I am to get ready to try and play this tournament and not play. I think the only reason he’s not going to play is if he doesn’t feel ready or if there is — just his foot, leg, back, whatever it may be sort of kicks up and then he just doesn’t feel ready to play.”

“But there’s just another level of buzz to see him and see him play. Shoot, I’ve thought about it in the past, and I may be on the first tee watching him tee off if my tee time works out and everything just because it’s such a special moment.”

Brooks Koepka: “I’m happy he’s becoming healthier and able to play golf. We need him, the game needs him, everybody needs him, the fans need him — all that stuff. But, at the end of the day, everybody is just out here competing. I’m worried about myself and I’m sure everybody else is worried about themselves.

“Look, I was in somewhat of his shoes trying last year two weeks after surgery. This place isn’t exactly an easy walk. I understand what he’s up against. It’ll be difficult. But if anybody can do it, it’s him.”

Webb Simpson: “As a player, we love it. I think we’re all Tiger fans. I learned my lesson to never count him out a few years ago when he came — he’s come back so many times from injury. So he’s an inspiration to all of us. Even when I hurt my neck earlier this year, I thought about it stinks right now but I can come back, I can make a full recovery, but he had a lot worse injury. I love that he’s going to give it a go.

“Any time anybody asks me can Tiger contend, the answer is yes. Just an amazing will inside of him, whether he’s hurt or sick or struggling with his golf swing or whatever it is. So it’s really cool that he’s making this week the push to come back after that car wreck. I hope he tees it up Thursday.”

Patrick Cantlay: “Yeah, great to see him. I’m sure he’s been preparing hard the last little bit, and living in Jupiter, heard rumblings when I would go to Medalist that he had been out there.

“I think he’s a good example of life’s not always perfect, and so it’s really exciting to see him on his highs. And so I hope that he is able to tee it up this week and play well, and obviously that’s the greatest thing for our sport. There’s definitely a different feel in tournaments that he tees it up in.”

Everyone wanted a glimpse of Woods when he arrived at Augusta National on Sunday. Cameron Davis was one of the few that saw him up close. Smith played a few holes with Woods on Sunday. On Monday, he talked about it.

“He ended up behind me and just joined up with me because it was a little slow in front of us,” Davis said. “Yeah, trying to pick his brain a little bit, but at the same time, just enjoying being in his presence. I’ve met him a couple times. It was the first time I’ve played any golf with him.”

“That was an enjoyable first go-round here tournament week. No fans or anything, just quiet. I hit with Tiger. It was nice.”

Max Homa, a three-time PGA Tour winner, said Tiger Woods‘ comeback from his serious injuries in a February 2021 car wreck reminds him of late NBA star Kobe Bryant working his way back from a torn Achilles tendon in 2013.

“It reminds me of the documentary ‘The Muse’ with Kobe Bryant after he pops his Achilles,” Homa said Monday. “It’s just him picking up marbles with his toes and putting it in, and he’s doing it way more than anyone else would do. That’s what I imagine Tiger is doing, just like the most reps you possibly can to get ready. It’s remarkable really.”

After Woods returned from multiple back surgeries and knee injuries, Homa said nothing surprises him about the 15-time major champion — not even Woods returning to play in a major championship just over 14 months after the wreck. “I’d be surprised if it was anyone else that’s ever lived,” Homa said. “So, no, I’m not surprised. I am amazed. It is a true testament to his work ethic because we all know what he does on the golf course, how hard he works, and the stories and the legend. But sitting there and doing all that [physical therapy], that’s got to be just boring at the very least, let alone hard.”

Is he here yet?

The buzz about Tiger Woods and the possibility he plays in this Masters was evident during a morning stroll around Augusta National. A few patrons wandering down the right side of the 13th fairway had a lengthy exchange.

“Nobody has seen him yet, right?”

“I heard somebody say they saw Joey [Woods’ caddie, Joe LaCava] out getting yardages.”

There are other players on the course. There are other storylines to consider. But one name — and one name only — is dominating this week at Augusta National: Tiger Woods.

Reporters weren’t the only ones waiting for Woods at the tournament practice area Sunday.

His caddie, Joe LaCava, was there about an hour before Woods. When reporters tried to pry information from LaCava, he responded, “Not even, ‘Hey, Joe, how’s your family? How’s your health?'”

A few minutes later, Ireland’s Shane Lowry, the 2019 Open Championship winner, walked from the parking lot to the practice area.

“I take it I’m not the person you’re all waiting for?” he joked to reporters.

Around 2:40 p.m., Augusta National Golf Club officials began to escort patrons out of the area because the course was closed to the public.

Woods showed up about 40 minutes later, wearing a peach Nike shirt, black pants, black shoes and a black hat. He fist-bumped PGA Tour pro Kevin Na and got a hug from Billy Horschel.

As Woods hit nearly a full bag of balls, Sungjae Im, who was working to the right of him in the practice area, kept taking peeks to see how Woods was doing. Canada’s Mackenzie Hughes, Max Homa and Jason Kokrak were also in the practice area with him.

Twenty minutes later, Woods was done. He and LaCava, along with Woods’ friend and associate, Rob McNamara, were whisked away in a golf cart. He was apparently headed to the course to play; it was closed to the media so it’s unclear how much on-course work he planned to put in.

What’s with the shoes?

Woods hasn’t yet said whether he’s actually playing in the Masters, but he has already caused a stir because of what was on his feet in the practice area Sunday.

“Like golf fans around the world, we are delighted to see Tiger back on the course,” Nike said in a statement to ESPN. “He is an incredible athlete, and it is phenomenal to see him returning to the game at this level. His story continues to transcend sport and inspire us all. As he continues to retrun, we will work with him to meet his new needs.”

Tracking Woods’ plane has become a thing. The letters and numbers on the tail of his private airplane — 517TW — were charted all day Tuesday as he worked his way to Augusta. It happened again Sunday after he announced he was headed to the site of the year’s first major.

🚨THE GOAT IS BACK🚨

So, tracking his plane is over. Now it is about tracking his steps and swings as Thursday’s first round approaches.

So you are saying there’s a chance

All week, the will-he, won’t-he questions kept coming. Once it was discovered that Woods flew in from Florida, with son Charlie, and played a practice round at Augusta National Golf Club on Tuesday, the speculation started. And with each passing day, the frenzy increased. Finally, on Sunday, Woods provided the first official indication of his thinking,

I will be heading up to Augusta today to continue my preparation and practice. It will be a game-time decision on whether I compete. Congratulations to 16-year-old Anna Davis on an amazing win at the @anwagolf and good luck to all the kids in the @DriveChipPutt.