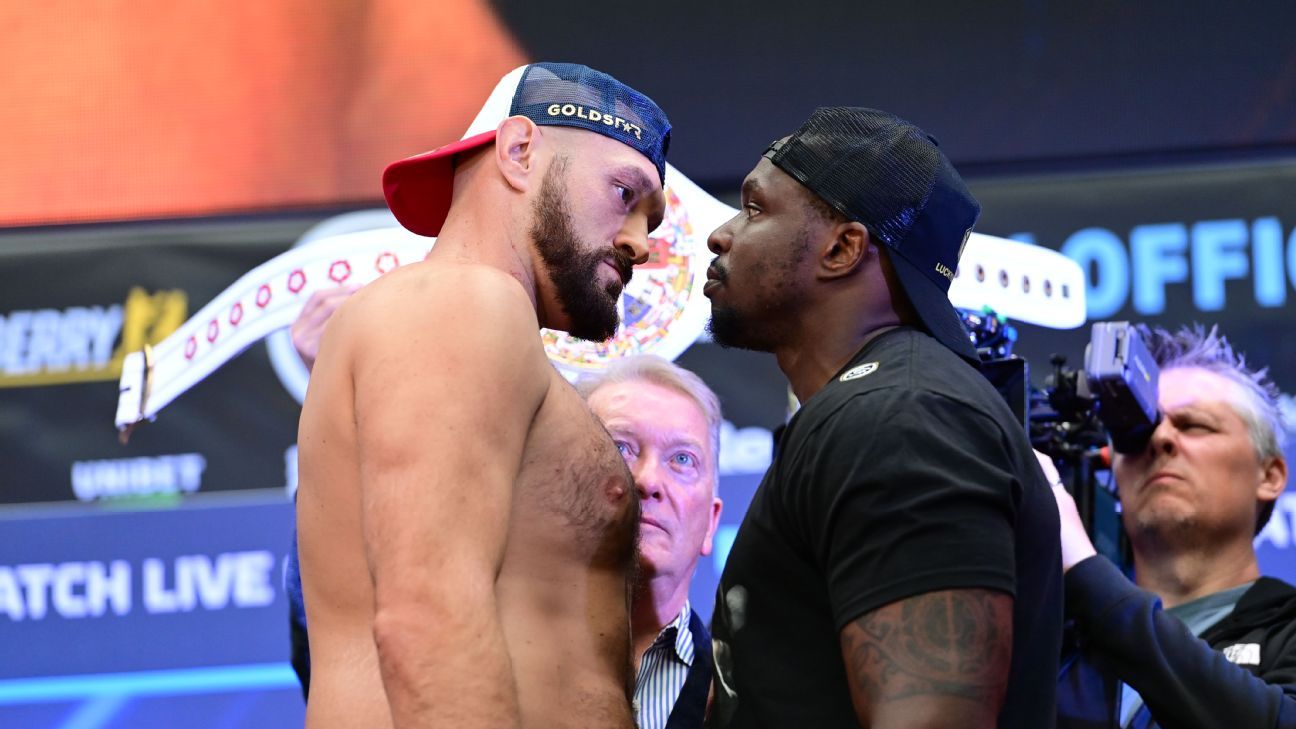 Tyson Fury returns to England to defend his WBC and lineal heavyweight titles against longtime mandatory challenger Dillian Whyte at legendary Wembley Stadium in London on Saturday (ESPN+ PPV, 2 p.m. ET with prelims at 1 p.m. on ESPN+). A U.K. record of 94,000 fans for a boxing event is expected.

Fury, 33, of Manchester, England, said he could retire after the fight, but if he wins, a potential unification fight for the undisputed heavyweight championship against the winner of the July 23 Anthony Joshua-Oleksandr Usyk fight could entice him to stay.

Whyte (28-2, 19 KOs) has been the WBC mandatory challenger for more than four years and is finally getting his shot at a major title. He last fought in March 2021, a fourth-round TKO victory in a rematch against Alexander Povetkin. Beyond Povetkin, Whyte, 34, of Jamaica but based in London, has beaten title contenders such as Dereck Chisora (twice), Joseph Parker and Oscar Rivas.

“It’s been an amazing journey,” Fury said during Wednesday’s news conference. “From where I started all those years ago to the ups and downs and being away from boxing and being fat as [392 pounds]. To coming back and being mentally out, a druggie and an alcoholic — all of the rest of the stuff… And now being back in England after all these years, four years away, and now I’m fighting my old pal Dillian Whyte back at home for all the glory…. Who would have thought it? We’re looking forward to an awesome, memorable night. This will break all records.”

For Whyte, fighting at home for the heavyweight championship is a dream come true.

“It means everything. It’s massive. It’s a moment I’ve been waiting for,” Whyte said. “It’s a big fight. Like Tyson said, we didn’t expect to be here. But I’m here, but I’ve taken risks time and time again. I’ve had a couple slip-ups along the way, but I’m here and I’m ready to go.”

Follow along as Mike Coppinger recaps the action from ringside in London and/or watch the fights on ESPN+ PPV.

Itauma goes to 7-0 with TKO win

Karol Itauma, with a second-round TKO of Michal Ciach, improved to 7-0 (with five knockouts) in the final undercard bout before the ESPN+ PPV begins.

Itauma, a 21-year-old Englishman, connected with a right hook that floored Ciach, prompting the referee to wave off the light heavyweight contest at 2:27 of Round 2.

The 18-year-old southpaw, in just his second professional fight, outpointed Constantin Radoi via shutout after the referee scored the bout 40-36.

Barney-Smith, who signed a promotional deal with Frank Warren’s Queensberry Promotions, said Thursday that he aims to become the youngest junior lightweight champion in British history. Radoi (0-11), a 23-year-old native of Romania, put up little resistance over the four-round showcase bout.