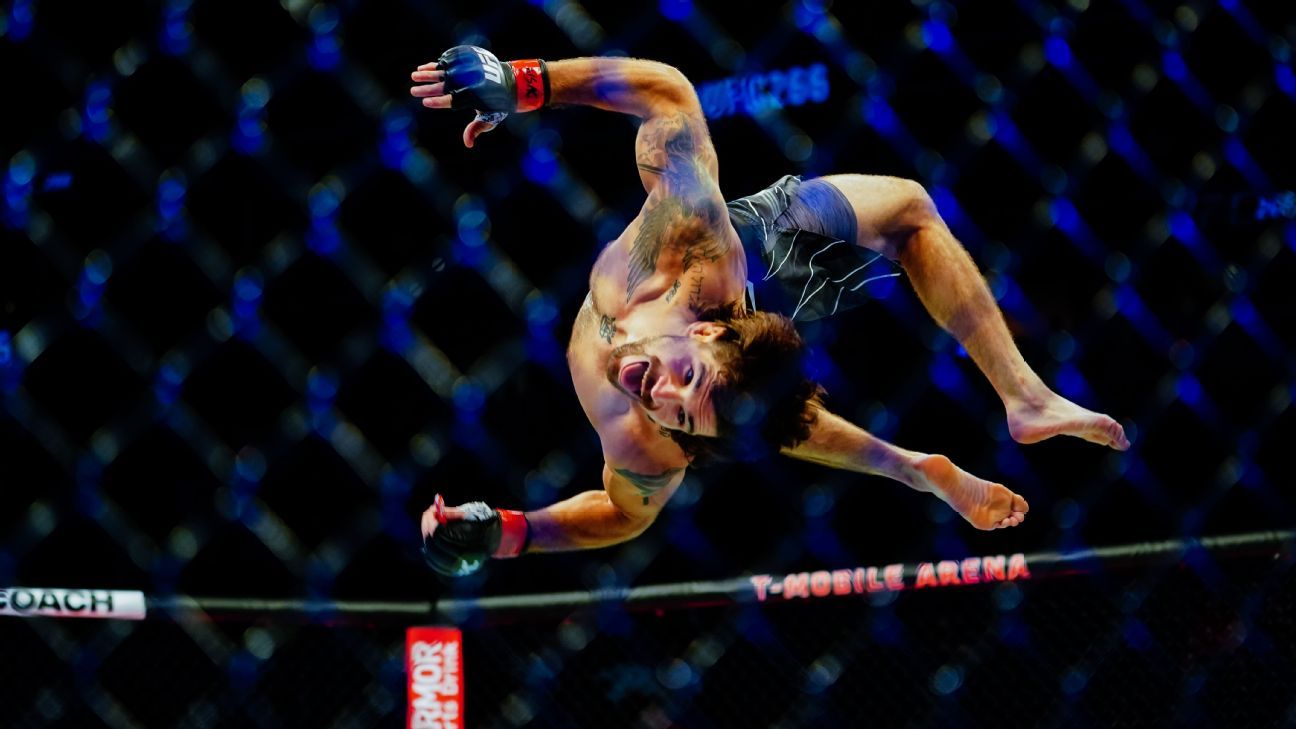 LAS VEGAS — Alexander Volkanovski is usually a cool customer. He has never really had any personal issues with an opponent. Until now, that is.

It’s clear Brian Ortega got under the skin of Volkanovski when they were coaching opposite one another on The Ultimate Fighter over the summer. On Thursday during their news conference stare-down, Volkanovski brought up Ortega’s 2014 positive drug test. The tensions were extremely high.

On Saturday, the two men will finally settle their differences when Volkanovski defends his UFC featherweight title against Ortega in the main event of UFC 266 in Las Vegas. The bout was initially scheduled for UFC 260 in March, but Volkanovski tested positive for COVID-19, forcing things to be pushed back.

Volkanovski (22-1) has won all of his nine UFC fights. The Aussie is coming off a split decision win over Max Holloway at UFC 251 in July 2020, his first title defense. That was a close one and many thought Holloway was the true winner. Volkanovski, 32, hasn’t lost since May 2013, his fourth pro fight. He beat Holloway to win the title at UFC 245 in December 2019.

Ortega (15-1, 1 NC) is coming off a unanimous decision win over Chan Sung Jung last October, a comeback victory for Ortega, who had been out nearly two years. The California native has only one career loss and that also came in a featherweight title fight, against Holloway at UFC 231 in December 2018. Ortega, 30, holds a 7-1 (1 NC) record in the UFC.

In the co-main event, Valentina Shevchenko will try to continue her dominant run as UFC women’s flyweight champion against challenger Lauren Murphy. Shevchenko (21-3), a 33-year-old Kyrgyzstan native fighting out of Las Vegas, is ESPN’s No. 2-ranked women’s fighter in the world. Her only UFC losses have come against Amanda Nunes, the pound-for-pound queen and double champion. Murphy (15-4), a 38-year-old Alaskan fighting out of Houston, has won five in a row.

Also on the card, Nick Diaz returns after a layoff of more than six years to take on old rival Robbie Lawler in a five-round middleweight bout. Diaz and Lawler fought way back in 2004, with Diaz winning by second-round knockout at UFC 47. Diaz (26-9, 2 NC), a 38-year-old from California, is a wildly popular former Strikeforce champion looking for his first win since 2011. Lawler (28-15, 1 NC), a 39-year-old fighting out of Florida, has dropped four straight. He is the former UFC welterweight champion.

Chris Daukaus finishes Shamil Abdurakhimov in Round 2 of their bout at UFC 266.

Daukaus (12-3) added a clip to the old highlight reel in this one, as he demolished Abdurakhimov (20-6) with a vicious right hand in the second round.

Daukaus, of Philadelphia, nearly finished the fight in the opening round, after he dropped Abdurakhimov with a left hook and then moved into full mount. Time ran out, however, before he could secure the finish — but it only delayed the inevitable. Daukaus went on to detonate a right hand on Abdurakhimov’s chin to earn the TKO at the 1:23 mark.

It probably should have been a clean knockout rather than a TKO, as referee Mark Smith allowed the heavyweight fight to continue even though it was obvious the right hand put him away. Daukaus followed him to the floor and dropped a few follow up shots to ultimately get the stoppage.

It was a blistering finish for a bout that moved at a slow pace early on. Both heavyweights stood in front of each other throwing punches, but struggled to land consistently. Once Daukaus broke the ice though, he never looked back.

Daukaus, who turned 32 years old on Saturday, is now 4-0 in the UFC and likely on the cusp of a top-10 ranking. Abdurakhimov, of Dagestan, suffered his second consecutive loss.

The UFC is looking for legitimate contenders for Valentina Shevchenko, perhaps its most dominant champion. Santos has a chance to be one of them.

Santos dominated Modafferi via unanimous decision (30-27, 30-27, 30-27) in a complete performance. Santos was the better fighter on the feet, dropping Modafferi twice, and actually surprisingly beat Modafferi, a grappling specialist, on the ground, too.

Rather than trying to exploit the striking advantage, Santos took Modafferi down early in the first round and kept that strategy throughout. In the second round, Santos cracked Modafferi with a one-two that dropped her. The right hand opened up a cut on Modafferi’s hairline. Santos dropped Modafferi with a left in the third round and then continued with damage from ground and pound.

Santos, 28, has won three straight, all by unanimous decision. The Brazil native has only one loss, her UFC debut against Mara Romero Borella in 2019. Modafferi, a 39-year-old fighting out of Las Vegas, is the most experienced women’s MMA fighter in the world with 44 pro fights going back to 2003. She has lost two straight, her first losing streak since 2013.

Turner is a striker, first and foremost, and he used his standup tools — both punches and kicks, to both body and head — to hurt Medic as they traded against the cage. But when the fight went to the ground, Turner took command and sank in a rear naked choke to get his second straight submission.

The end came at 4:01 of the first, after Medic went down to his knees amid a barrage of punishment, mostly to the midsection. Turner, who had earlier looked sharp in controlling position on the ground, followed his opponent to the mat to seize the finish. It was the third straight victory overall for the 26-year-old Californian, all finishes.

Medic, a 28-year-old Serbian who fights out of Alaska, came in undefeated but was playing catch-up right from the start of this one. He was outmatched everywhere the fight went.

Maximov (7-0), a teammate of UFC veteran Nate Diaz, picked up his first win in the promotion with a unanimous decision over Cody Brundage.

The California middleweight leaned heavily on his wrestling to secure the win. He took Brundage down repeatedly in the fight, or held him against the fence when he couldn’t drag him down. He took Brundage’s back a handful of times, and cruised to a clear 29-28 victory on all three judges’ scorecards.

Brundage, of Colorado, took the fight on short notice when Maximov’s original opponent withdrew. He came out loose, with no problem letting his hands go early, and even leaped into a flying knee. The wrestling grind of Maximov eventually wore on him, however, and even though he managed to win the third round, he was already in a hole.

Maximov is a former contestant on Dana White’s Contender Series. The UFC originally did not sign him to a contract but ultimately added him to the roster after he won on the show.

Team Diaz is not off to a great start.

Semelsberger absolutely starched Sano with a monstrous knockout at 15 seconds of the first round. This is Semelsberger’s second consecutive quick KO in three fights. He knocked out Jason Witt in 16 seconds in his UFC debut in March. This was the UFC debut for Sano, a longtime teammate of Nick Diaz.

“It felt amazing,” Semelsberger said in his postfight interview. “But honestly, man. I’ll take the quick knockout. But … I was coming in ready for a war.”

Afterward, Semelsberger said he’s coming up on the final fight of his contract.

What. A. Punch! from @SemiTheJedi

“I’m ready for whatever you throw at me,” he said. Semelsberger, 28, is now 3-1 in the UFC. The Maryland native is a grappler, but he clearly has one-punch knockout power that must be reckoned with.

Sano, a 30-year-old California native, is winless in four straight.

Pearce went right after Morales at the start, but was met by a couple of sharp left jabs and a straight right hand. So Pearce went to Plan B, and he wore down his opponent with relentless grappling to earn his second straight finish.

Pearce, who is 29 and from Tennessee, trapped Morales against the cage for much of the rest of the fight, taking him down and, when Morales worked his way back to his feet, taking him down again. By midway through Round 2, it appeared that Morales was unable to put up much resistance. While on Morales’ back while standing, Pearce sank in a rear-naked choke to get the tapout at 3:31.

Morales, a 35-year-old Venezuelan fighting out of South Florida, has lost two of his past three after winning the first 10 fights of his career.