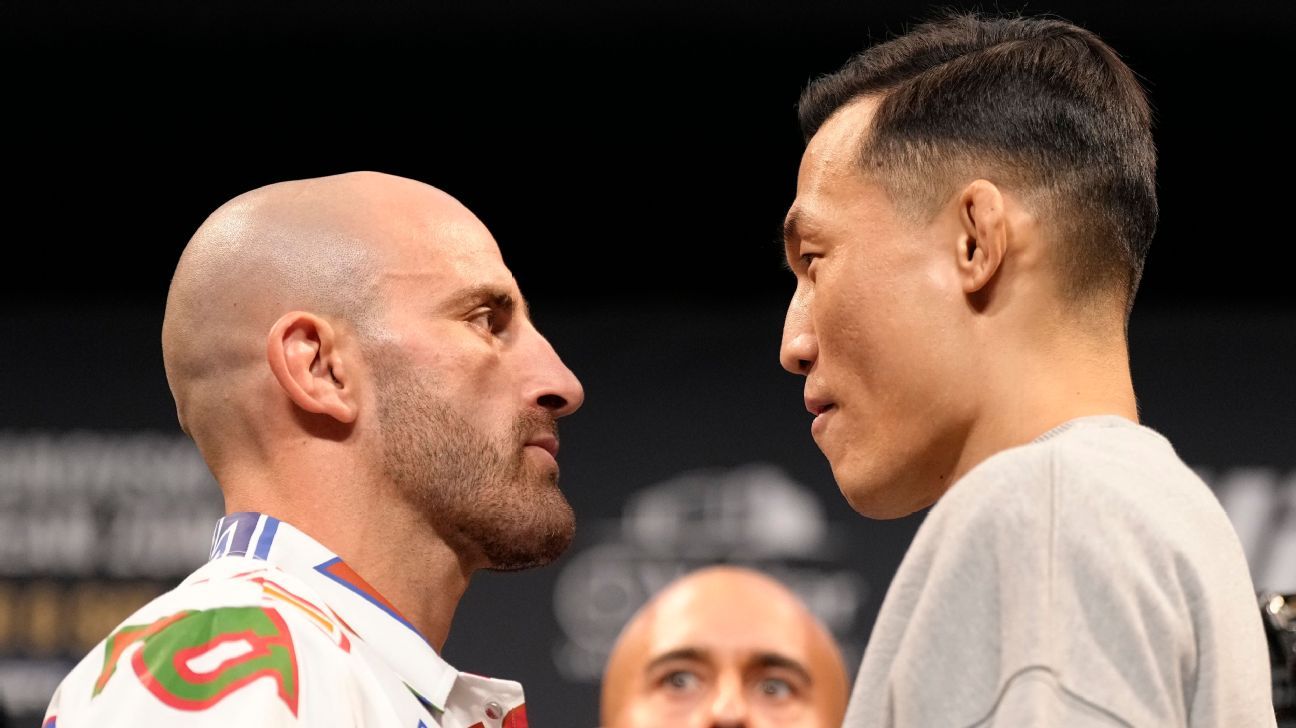 JACKSONVILLE, Fla. — Chan Sung Jung knows this might be his last chance.

“The Korean Zombie” first challenged for the UFC featherweight title in 2013. On Saturday, Jung will be back with a chance at the belt against champion Alexander Volkanovski in the main event of UFC 273 at VyStar Veterans Memorial Arena.

ESPN ranks Volkanovski as the No. 4 pound-for-pound fighter. At featherweight, Volkanovski is ranked No. 1 and Jung is No. 9. Max Holloway, whom Volkanovski has defeated twice in title fights, was the originally scheduled opponent for Volkanovski before withdrawing because of injury.

Volkanovski (23-1) has won 10 straight to start his UFC career and 20 in a row overall. The Australia-born fighter defended his title against Brian Ortega via unanimous decision at UFC 266 last September and now has two successful title defenses. Volkanovski, 33, beat Holloway to win the belt at UFC 245 in December 2019.

Jung (17-6) has won three of his past four. The South Korea-born fighter is coming off a unanimous decision win over Dan Ige last June. Jung, 35, will pass Dan Henderson on Saturday as the UFC fighter with the most time between title fights. Aldo beat Jung at UFC 163 on Aug. 3, 2013.

In the co-main event, Aljamain Sterling and Petr Yan will unify the UFC bantamweight title. Sterling won the title via disqualification when Yan hit him with an illegal knee at UFC 259 in March 2021. Yan is the interim champion, following a win over Cory Sandhagen at UFC 267 last October.

Also on the card, former title challenger Gilbert Burns and red-hot, undefeated prospect Khamzat Chimaev will meet in what could be a welterweight title eliminator. Plus, Mackenzie Dern will face Tecia Torres in a women’s strawweight contender matchup and top prospect Ian Garry will meet Darian Weeks.

Follow along as Brett Okamoto, Marc Raimondi and Jeff Wagenheim recap every fight, or watch the fights on ESPN+.

It’s been nearly four years since Pennington challenged unsuccessfully for the UFC’s bantamweight title. If she keeps this up, she might get another crack at it.

Pennington, of Colorado Springs, picked up her fourth win in a row by thoroughly out-pointing the 27-year-old Ladd. All three judges awarded the fight to Pennington, 29-28. According to UFC Stats, she out-landed Ladd in total strikes, 131 to 82.

Pennington’s boxing skills set the tone in the first and second rounds. She landed straight punches early and dominated the exchanges up close. She took the fight on nine days’ notice and got out-grappled in the third round, but still won the cards.

Even in the third round that didn’t go her way, Pennington did well defending Aspen’s wrestling, especially considering the short notice nature of the fight. She called out Sara McMann in her post-fight speech.

Ladd, who was once considered one of the brightest prospects in the division, falls to 1-3 in her last four.

Mike Malott wins his UFC debut by knocking out Mickey Gall in the UFC 273 prelims.

It’s been a good night for UFC debutants.

Malott starched Gall with a left hook, resulting in a TKO at 3:41 of the first round. Gall face-planted on the punch and Malott followed up. But the referee rightly stepped in to save Gall and end the fight.

The fight was pretty even before the finish, with both men trading combinations. Malott was bleeding from the nose as a result of Gall’s offense.

Malott, 30, has won four straight overall. The Canada native, who trains out of Team Alpha Male in California, beat Shimon Smotritsky via first-round submission to earn his way into the UFC on Dana White’s Contender Series. Gall, a 30-year-old New Jersey who trains out of Florida, has dropped two straight.

Aleksei Oleinik proves that he can still hang with the best of them at 44 years old with an impressive submission of Jared Vanderaa.

For the greybeard 44-year-old Russian, the neck crank he used to elicit a tapout from Vanderaa was his 47th submission victory in a 60-fight career. The submission came at 3:39 of the opening round, was Oleinik’s second scarf hold in the Octagon and only the seventh in UFC history. He has seven submissions in the UFC, the second most in heavyweight history behind Frank Mir‘s eight.

Hope I could grapple like Oleinik in a decade, WOW! #UFC273

The victory, which broke a three-fight skid, makes Oleinik the third oldest fighter to win in the UFC, behind Randy Couture (47) and Dan Henderson (45).

Vanderaa, a 29-year-old from Memet, California, knew Oleinik planned to take the fight to the canvas and he prevented that from happening early on. Then he took Oleinik to the mat himself and took back control, threatening a rear-naked choke. But Oleinik used a leg lock to reverse position, then clamped on the finishing move to hand Vanderaa his third loss in a row and fourth in his last five fights.

Early on, it looked like Hansen’s wrestling would be the difference in the matchup, but Rodriguez proved to be a notch above as the fight wore on.

Rodriguez picked up a unanimous decision (29-28, 29-28, 29-28) win in her UFC debut against Hansen. Known as a striker, Rodriguez has been training in Los Angeles with noted wrestling coach Kenny Johnson and the results were apparent.

Should Dillashaw get the winner of Sterling-Yan 2?

TJ Dillashaw is here backstage at #UFC273. He says he plans on fighting the Yan vs. Sterling winner.

Santos walked into the cage for his UFC debut and never took a backward step for three rounds, firing every shot with significant power. In the face of that aggression, Arce spent 15 minutes moving left, moving right, sliding backward and stepping forward to crack Santos again and again in a show of veteran mastery that earned him the nod on all three scorecards (30-27, 30-27, 29-28).

Arce, 32 and from New York, has won two of his past three, with the loss coming against rising star Song Yadong. He was patient and elusive, avoiding most of what Santos threw and marking him up with a steady flow of right jabs, straight left hands and high kicks. One downside: Arce missed the bantamweight limit at Friday’s weigh-in, at 136.5 pounds.

Santos, a 27-year-old Brazilian, saw a two-fight winning streak end. He was aggressive but too wild with punches and spinning attacks, landing just 17 of 70 in the first round and losing steam from there.