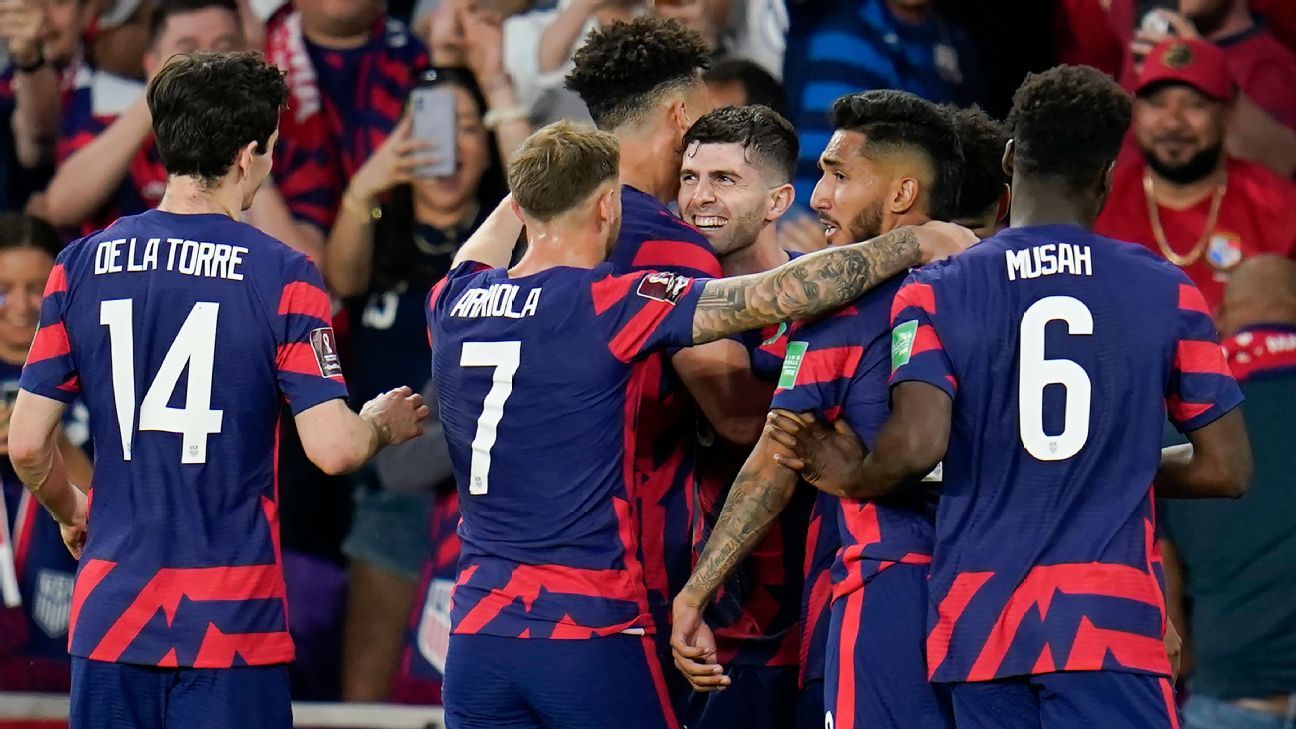 SAN JOSE, Costa Rica — The United States men’s national team has qualified for the 2022 World Cup, securing its berth to the tournament in Qatar after missing out on the 2018 edition in Russia.

Despite losing 2-0 to Costa Rica on Tuesday, the USMNT managed to secure one of CONCACAF’s three automatic berths, along with group winner Canada and rival Mexico.

The U.S. went into Wednesday’s game at Estadio Nacional needing only to avoid a loss of six goals or more to punch its ticket.

– World Cup finals draw: Date, time, format, seeds
– World Cup: Who has qualified and who is still in contention

The United States finishes the 14-game qualifying cycle with a record of 7 wins, 3 losses and 4 draws for 25 points. That total left the U.S. 3 points behind Canada and Mexico, and level with Costa Rica, with only a goal differential of +11 ensuring the Americans finished ahead of Tuesday’s hosts (+5).

Though the team was inconsistent at times during qualifying, it remained in a strong position throughout the cycle.

“We expected [qualifying] to be a challenge and expected there to be a lot of ups and downs. A lot of trials and tribulations and we know we have a really young group going through this for the first time. We know how difficult CONCACAF is to qualify.”

Although only four players on the current roster were with the team when it missed the 2018 World Cup, the group has been saddled with correcting that failure. None more so than Christian Pulisic, the star Chelsea forward.

“Growing up as sort of that golden child in [this] U.S. soccer generation, people put expectations on him. To be quite frank with you, he’s dealt with them better than anybody would really deal with that. In every single situation, he’s expected to do things that people like [Lionel] Messi and [Cristiano] Ronaldo are supposed to do.

“He’s supposed to bring us to the World Cup.”

And while that pressure appeared to get to Pulisic at times during qualifying, his hat-trick against Panama on Sunday came in the most consequential game the U.S. had played in years. Pulisic finished the cycle with a team-best 5 goals. At 23 years old, Pulisic’s 12 goals over the last two qualifying cycles ranks fourth all-time in U.S. history.

“I think at this point, I wouldn’t say it’s the ultimate goal, I think the ultimate goal is obviously to win a World Cup,” he said. “But there’s steps you have to take to get there and one of the huge steps is to qualify for World Cup.”

The U.S. will be placed into Pot 2 for the draw to decide the eight four-team groups, which will be held Friday at 12 p.m. ET in Doha, Qatar.

Only three teams in the 32-side field have yet to be determined. In a pair of one-game playoffs in Qatar in June, Costa Rica will play New Zealand while Peru will play either Australia or the United Arab Emirates.

The final spot will belong to the winner of Wales vs. Scotland/Ukraine. The Scotland-Ukraine playoff match originally scheduled for March 24 was postponed following Russia’s invasion of Ukraine and has not been rescheduled.