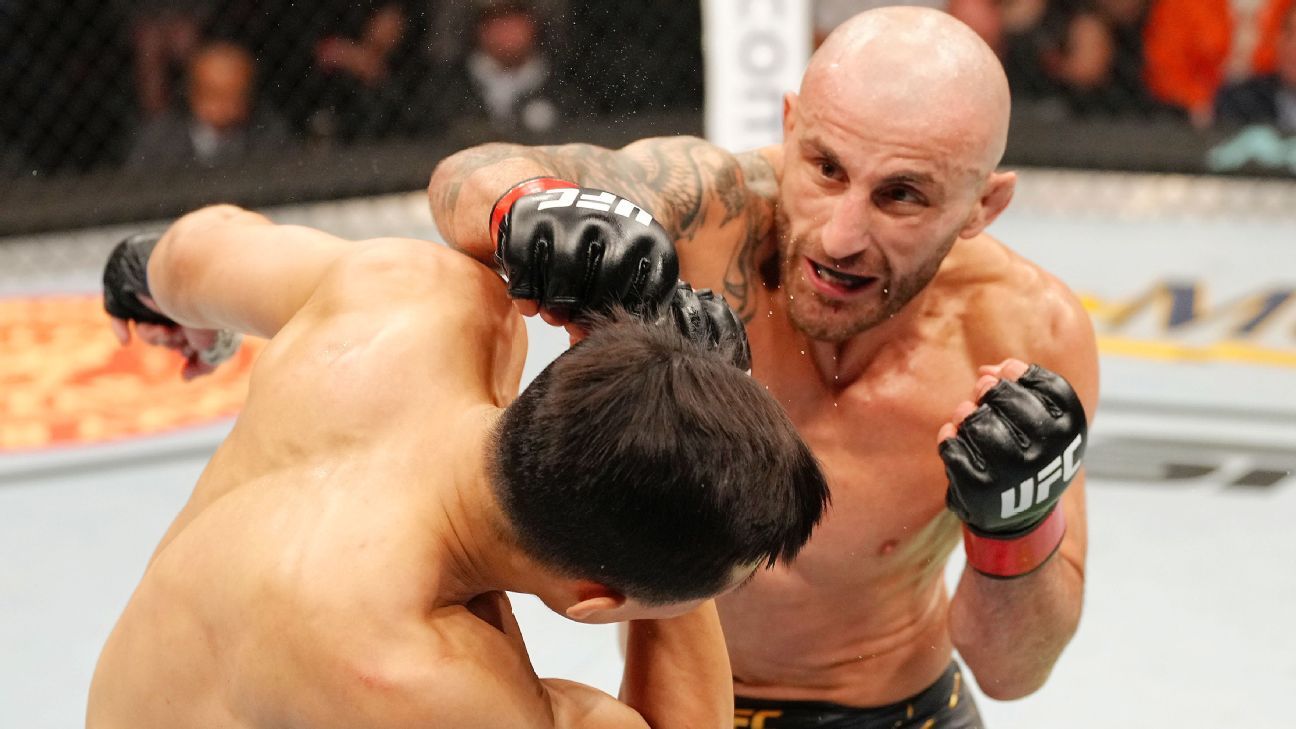 JACKSONVILLE, Fla. — Alexander Volkanovski vowed to finish Saturday night, something he has yet to do to an opponent since becoming UFC featherweight champion. One of the world’s top fighters lived up to his promise.

Volkanovski stopped “The Korean Zombie” Chan Sung Jung via TKO (punches) at 45 seconds of the fourth round Saturday night in the main event of UFC 273 here at VyStar Veterans Memorial Arena. With the victory, Volkanovski picked up his third featherweight title defense.

It was one-way traffic the whole way, with Volkanovski doing damage to Jung in every round. Volkanovski dropped Jung at the end of the third round and nearly finished him with ground and pound.

At the start of the fourth, it was pretty clear referee Herb Dean was keeping an eye on Jung, whose face was badly marked up and whose nose looked broken. When Volkanovski landed a big combo early in the fourth, Dean stepped in to stop it even though Jung was still standing.

“He actually took a lot more than I wanted him to,” Volkanovski said in his postfight interview. “I thought they could have stopped it earlier. That’s the sport we’re in.”

ESPN has Volkanovski ranked No. 4 on its MMA pound-for-pound list. At featherweight, Volkanovski is ranked No. 1 and Jung is No. 9. Max Holloway, whom Volkanovski has defeated twice in title fights, was the originally scheduled opponent for Volkanovski before withdrawing due to injury.

“Everybody in my division, I’ve been saying it for a while now,” Volkanovski said. “Get your s— together and earn that No. 1 spot. If you don’t, you’re gonna miss out.”

Volkanovski dropped Jung with a right hand at the end of the first round and then took him off his feet again with a leg kick right after. It was more big combos for Volkanovski in the second round.

Jung, who had the crowd’s support, started off the third round hot. But before long, Volkanovski took over again. It felt like he was landing every combination he threw, including the one at the end of the round that nearly stopped Jung. Early in the fourth, it was over.

“I was most confident out of my entire career,” Jung said. “I wasn’t tired. I was ready to go. But I felt like I had a wall that I could not go over.”

Volkanovski (24-1) has won 11 straight to start his UFC career and 21 in a row overall. The Australia native defended his title against Brian Ortega via unanimous decision at UFC 266 last September and now has three successful title defenses. Volkanovski, 33, beat Holloway to win the belt at UFC 245 in December 2019.

Jung (17-7) had won three of his four previous fights coming in. The Korea native was coming off a unanimous decision win over Dan Ige last June. Jung, 35, passed Dan Henderson on Saturday as the UFC fighter with the most time in between title fights. Aldo beat Jung at UFC 163 on Aug. 3, 2013.

“I will have to think on that,” he said.