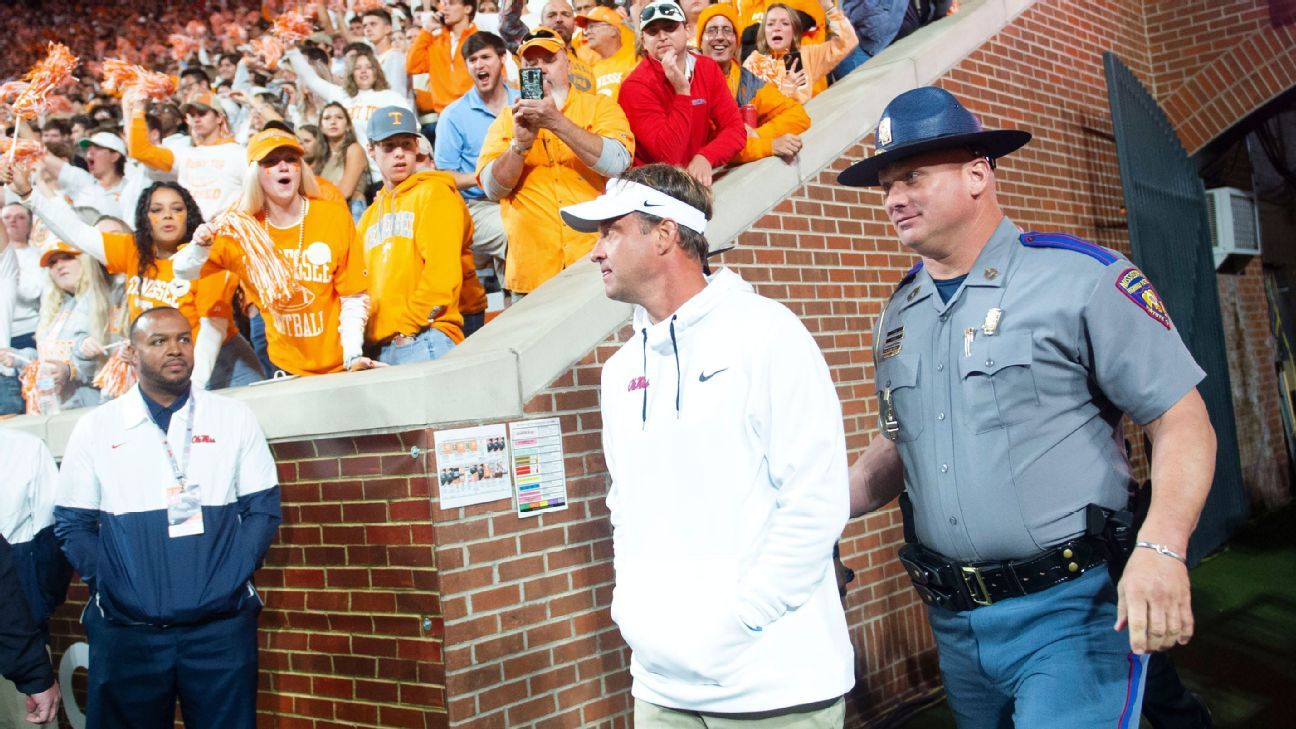 KNOXVILLE, Tenn. — Lane Kiffin stood outside the visitor’s locker room at Neyland Stadium in the wee hours of Sunday morning proudly twirling a beaten-up yellow range ball and searching for a new visor.

He’d just tossed his old visor to the jeering Tennessee fans as he exited a field littered with water bottles, vape pipes, screws, a half-eaten apple, even an empty mustard bottle. He kept the golf ball as a souvenir, but felt like he owed the Vols’ fans their own keepsake.

“The Tennessee fans there at the tunnel were all going, ‘F— you. F— you,’ so I throw them my visor … and they all start fighting over it,” Kiffin told ESPN. “Maybe all of them don’t hate me.”

Lane Kiffin caught a water bottle on his way out of Neyland Stadium – and tossed his visor back 😅 pic.twitter.com/KVxZiPK7ZB

Maybe not, but what’s not debatable — in the aftermath of one of the wildest and ugliest scenes in recent college football history Saturday in Ole Miss’ 31-26 victory over Tennessee — is that when Kiffin exits Knoxville as a head coach, all hell is sure to break loose.

“Just when you thought everyone had moved on and made up,” Kiffin said jokingly. “Nothing ever goes normal. Welcome to my world. And we all thought it was crazy when I left here 12 years ago.”

In January 2010, when Kiffin bolted Tennessee after just one season for the USC head coaching job, drunken students were running amok on campus and burning mattresses as the news broke. Even an impromptu news conference that Kiffin called to explain to fans why he was leaving erupted into chaos, with media members screaming at each other and fighting over what portion of Kiffin’s comments would be on camera as he waited in an adjacent hallway.

Then on Saturday, with Kiffin back on Rocky Top for the first time as a head coach, fans peppered the Ole Miss sideline with debris of every kind following a controversial spot on a fourth-down play by the Vols that came up just short of the first-down marker.

The game was delayed for 20 minutes as security personnel evacuated the Ole Miss sideline and sent coaches and players to the middle of the field. Ole Miss cheerleaders also had to be cleared from the sideline, and SEC commissioner Greg Sankey issued a statement condemning the “actions of fans,” with Tennessee chancellor Donde Plowman and athletic director Danny White both issuing apologies to Ole Miss on behalf of Tennessee.

When the nearly five-hour marathon was finally over, a composed Kiffin gathered his players together in the locker room and told them that it was the much-maligned Ole Miss defense that “really won the game for us,” drawing a huge cheer.

But the most raucous cheer came when Kiffin thanked his players for the way they handled the whole circus, from the buildup to his return to the bottle-throwing circus at the end of the game.

“I didn’t say anything all week,” Kiffin told the players. “This was obviously a big deal personally, so I want to thank you guys.”

A chorus of players roared back, “We got you, coach.”

Kiffin, who went out of his way to compliment the passion of the Tennessee fans even after dodging bottles and golf balls, couldn’t hold back. He cracked a wry grin and said, “It wasn’t about me, but I just want to say, ‘Take that, you 100,000 fans.'”

The locker room again erupted, and Ole Miss quarterback Matt Corral, his eye black smeared across his face, nodded his head approvingly and pointed in the direction of his head coach.

“I felt it all week, what this game meant to him. He tried to hide it, even from me,” said Corral, who passed for 231 yards, rushed for 195 yards and threw two touchdown passes. “He did a great job because if he would have tried to make it a thing with us, it could have been a different outcome.

“This was never about Coach Kiffin’s revenge tour or whatever. It was about us coming in here and getting a collective win, and he set the tone for that.”

Corral got a good look at Kiffin’s souvenir golf ball.

“I saw him put it in his pocket,” Corral said. “He’s going to save that, and he should. I guess it was his going-away present from the fans.”

Even the night before the game, Kiffin had one of those “Twilight Zone” feelings. His suite at the Hilton was the exact same one he stayed in when he came to be introduced as the Vols’ coach on Dec. 1, 2008.

“They brought me in, and I remember sitting in the same suite and watching Coach [Phillip] Fulmer’s last game and seeing the players carry him off the field,” said Kiffin, who would be formally introduced two days later.

Kiffin joked with his agent, Jimmy Sexton, that he might hit the town Friday night before the game and even trolled Tennessee fans on Twitter that night with a picture of Rooster’s Sports Bar, one of Kiffin’s favorite establishments when he was coaching at Tennessee.

Kiffin’s father, Monte, and his sister, Heidi, made the trip to Knoxville and met some friends out for dinner Friday night. It’s the only road trip Monte, now 82, plans to make for the season.

“I wasn’t going to miss this one,” he said, repeating something he has told several people over the years.

“I still say we never should have left here. So many good people and a great place to live, but Lane just couldn’t say no to USC.”

While Kiffin didn’t make it out Friday night, he did make a few rounds Saturday morning. He went to a yoga class, which has become a staple of his now that he has lost more than 30 pounds and is on a regimented health kick. He also stopped by to see some friends and even took a picture of his old house on the lake in west Knoxville.

“Of all my coaching stops, that was my favorite house,” Kiffin said.

Kiffin has been a part of some electric environments at Neyland Stadium but said the one Saturday, both before and during the game, was as good as he has seen.

“You could tell when we got here, they were ready,” he said.

It was Tennessee’s first home sellout since 2017. The Vols’ fans checker-boarded the stadium, and the vibe at the tailgates on campus was like the old days when the Vols were competing for — and winning — championships.

Patrick Palmer and his son, Ryan, came from Tewksbury Township, New Jersey, for the game and met up with longtime friends from college.

“Lane Kiffin coming back is a big reason we picked this game to come back for,” said Palmer, who played baseball at Tennessee. “The thing that really eats at you, though, is that when he left, it set our program back 10 years. We’re still trying to recover.”

Rusty Rathburn, who lived at the old East Stadium Hall dormitory with Palmer, made the trip from Portage, Michigan, along with his son, Luke, who has become a rabid Tennessee fan.

“It’s almost like we’ve been cursed since Kiffin left, and we haven’t been able to break that curse,” said 17-year-old Luke.

Some of the really young Tennessee fans frowned at the mere mention of Kiffin’s name.

“He’s a traitor,” said 11-year-old Parker Cates, who was at the game with his dad, Tripp, and younger sister, Addie.

But in many ways, echoing the sentiments of some Tennessee fans to this day, Parker eloquently explained why there’s such a love-hate relationship between Tennessee fans and Kiffin.

“My dad told me if he wouldn’t have left that we would have gone to the SEC championship game at least a couple of times, so that’s why I want to beat his butt,” said Parker, adding that he would be OK with Kiffin coming back.

AJ Crigger, who at 10 years old wasn’t even born when Kiffin was the head coach at Tennessee, has also heard all the stories from his dad, Blake, who played baseball at Tennessee.

“I hope he breaks four headsets, and we’re not going to let him throw his play sheet in this game,” AJ said while tailgating with his dad before the game.

The first time Kiffin returned to Tennessee as offensive coordinator at Alabama in 2014, he said Alabama security officials tried to convince him to wear a bulletproof vest under his coaching gear.

“They kept talking to me about it, but I wasn’t going to do that,” he said.

And, no, he didn’t think about wearing one this time, even though he could have used some protection those last 54 seconds when the Ole Miss sideline became a “driving range target” for golf balls and everything else.

“I think it was mostly students, and then you get 100,000 people together and things don’t go their way with all that energy, they get upset,” said Kiffin, adding that the fans’ outrage at the end of the game was probably directed at the officials as much it was at him.

Either way, as the stands began to fill and the energy built before the game, Kiffin admits he thought back to the South Carolina game in 2009 when the Vols wore black jerseys and upset No. 22 South Carolina and Steve Spurrier 31-13.

“I had that blackout feeling similar to the South Carolina game when we beat them here,” Kiffin said. “I just remember running out of the ‘T’ and was like, ‘Whoa!’ But this time, I was on the other end.”

Even though he had been back to Neyland Stadium twice as an offensive coordinator at Alabama, Kiffin acknowledged it was different coming back as a head coach.

“It really didn’t hit until the game got going, and then the fans got a little crazy,” he said. “There were a lot of people saying, ‘You’re No. 1’ [holding up middle finger]. I would said, ‘Hey, thank you.'”

Kiffin made an impressive one-handed snag of a bottle thrown at him as he was leaving the field. He was showered with a bucket full of popcorn, too.

The popcorn signs were everywhere before the game.

In this case, the Lane Train kept on rolling to Ole Miss’ best start (5-1) since its 2015 Sugar Bowl season.

And despite the rude goodbye by some Tennessee fans, Kiffin said there are no hard feelings. At least not on his end.

“It’s kinda like an ex when they say, ‘Oh, I’m really over him or over her,’ and then when they see a person with their new wife or husband, meaning football team in this case, they lose their mind and go crazy,” Kiffin said. “Maybe that has something to do with it.

“But I’ve always admired the passion of these fans.”